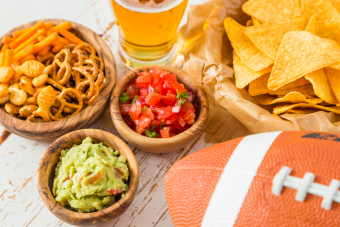 Americans eat a lot on Super Bowl Sunday, according to one 2015 study consuming triple the amount of their daily allowance of calories per serving during the Super Bowl. In fact, it’s the second largest food consumption day of the year in the country (behind Thanksgiving). Of the many millions of pounds of snacks eaten in honor of America’s (still) favorite sport, 8.2 million pounds of that are tortilla chips, generally served with such things as cheese, beans, and avocados. Not just commonly served today during football games, the legend of nachos has a football-centric history that doesn’t date all that far back, similar to another Super Bowl party staple, Buffalo Wings, that only became popular a little under three decades ago. This all brings us to the topic of today- who invented nachos and why are they called that?

Prior to the 1940s, the word “nacho” had two meanings- one was a Tex-Mex slang word combining “naturally” and “of course” into “nacho.” The other was a common nickname for a small boy whose name was “Ignacio”- basically the Mexican equivalent of calling a boy named William “Billy” or Timothy “Timmy.”

Discovery of this latter fact led Adriana Orr from the Oxford English Dictionary in a search to see if there was an Ignacio behind nachos. What she ultimately found was a man named Ignacio Anaya Sr. who, while he probably wasn’t the first person to ever decide to mix tortilla chips with melted cheese and jalapenos, does seem to be the person directly responsible for nachos becoming a thing, along with lending his name to the food item.

The “nacho” story begins in the early 1940s in the town of Piedras Negras, Mexico, which is only four miles from the American border and near Eagle Pass, Texas. That was the site of historic Fort Duncan, which during World War II was used as a support facility for the nearby Eagle Pass Army Airfield. With the border only a few miles away, many who were stationed in the region often traveled into Mexico for a better bite to eat.

This is where details of this legend get deliciously murky. To wit- in Piedras Negras a favorite restaurant of the border crossing Americans was the patriotically named Victory Club, then owned by one Rudolfo de Los Santos. Another such restaurant in the town was the Old Moderno Restaurant. Both establishments featured a common worker – the aforementioned Ignacio Anaya Sr., who was more affectionately known as “Nacho” Anaya. Stories are mixed (including ones featuring interviews with Anaya Sr. himself) as to which he was working at when he first whipped up the appetizer that would come to bear his name. Wherever he was when he first made it, after their advent, he made sure they were served at both restaurants.

While there are various tellings of the tale, according to an article by Clarence J. La Roche published on May 23, 1954 in the San Antonio Express titled “Nacho’s? Natch!”- the first known account of the origin of nachos- Ignacio himself told La Roche that one night a group of customers (often variously claimed to have been soldiers or soldiers’ wives), tired of the normal fare, came in asking for something completely new. La Roche then stated Ignacio told him,

Honestly, I didn’t have the least idea what I was going to try. But, I went into the kitchen, looked around and started groping for an idea. I saw a bowl of freshly fried pieces of tortilla; then I figured some grated cheese on them might be all right. Well, I got the cheese and began sprinkling the tortilla pieces with it. About this time, I got the idea to put some jalapeno strips atop the cheese. I got the jalapeno; and as I finished putting the strips on the cheese, I decided it would be a good idea to put the whole thing into the oven to melt the cheese.

(In a 1969 interview appearing in the San Antonio Express and News, he would further state that his recipe for nachos was mostly just a variation on quesadillas his foster mother used to make him as a child.)

When the customers asked what the dish was called, he told them “Nacho’s Especiales.” Within days patrons were clamoring for “Nacho’s Special” and Anaya was teaching other workers at the pair of restaurants he worked at to make them. He also soon began experimenting with variations on the original, such as including refried beans and guacamole.

It should be noted here that the original date of these first nachos is disputed- it was claimed both in the aforementioned 1954 San Antonio Express interview as well as in a Corpus Christi Times interview in 1974 that Ignacio said he first whipped them up in 1940. But in both cases this wasn’t a direct quote from him, just these articles claiming he said that. If this is true, it would call into question the commonly stated “soldier” or “soldiers’ wives” angle as Fort Duncan wasn’t made into a military base in WWII until 1942 and Eagle Pass Army Airfield not activated until that same year. However most sources, including Ignacio Jr., state the correct year was actually 1943.

Whatever the case, during the 1940s the appetizer began to spread along Texas/Mexico border towns under the name “Nachos Especiales,” with one of the first known documented instance of this occurring in 1949 in A Taste of Texas, by Jane Trahey,

There’s a little restaurant in the small Mexican town of Villa Acuna that serves some of the finest food in the world. For part of World War II, Mr. Julian Cross, managing editor of the San Antonio Express, was stationed on the Rio Grande border. One night a small group of officers, one terribly homesick, decided to visit Pedro, their favorite waiter there. Like all Latins, Pedro just couldn’t stand unhappiness. He did everything but stand on his head to cheer his morose uniformed guest. When nothing, including the Martinis, worked, Pedro left. Sometime later he returned carrying a large dish of Nachos Especiales. “These Nachos,” said Pedro, “will help El Capitan—soon he will forget his troubles for nachos make one romantic.”

It goes on to give the recipe as:

1 pkg. Mexican tortillas
A small hunk of American cheese
A bottle or can of pickled peppers (preferably jalapenos)
Cut tortillas into small triangular pieces, place in a pan and put into a medium hot oven to toast. Remove from the oven when barely crisp, put a small piece of cheese on each piece of tortilla. Replace in the oven until the cheese is melted; remove from oven and garnish each piece with a small slice of pickled pepper and serve.

A year before this, “nachos” appeared in the San Antonio Light in an advertisement for the Latin Quarter Mexican Restaurant:

As for Anaya Sr. himself, he would go on to open his own restaurant, Nacho’s Restaurant, in Piedras Negras where Nacho’s Especiales were featured on the menu.

By 1959, nachos would make the jump to the west coast thanks to a young woman named Carmen Rocha who moved from San Antonio to L.A. with her husband. Since San Antonio is less than a three-hour drive from Piedras Negras, she had grown up with nachos. When Rocha got a job serving at El Cholo Mexican Restaurant on Los Angeles’ Western Avenue, she told the chef’s about the easy and quick to make tasty snack she used to eat as a teen called nachos. Decades later, El Cholo had become an L.A. institution, thanks in large part to Rocha and her nachos. When she died in 2008, even El Cholo regular Jack Nicholson grieved, telling the LA Times, “Carmen was wonderful, to me and to everybody… It’s a community loss.”

While Rocha’s introduction of nachos to the west coast surely contributed to its popularization, there’s no bigger influence on how nachos are consumed today than Frank Liberto, “The Father of Nachos”. He’s the man who introduced so-called “fast food” or “stadium” nachos- the ones with the gooey, yellow “cheese”- to sports stadiums and movie theaters. With his family originally hailing from Sicily, Liberto took over the San Antonio-based family food business from his father “Rico” Liberto selling concessions. In fact, the company was perhaps the first American concession-focused business, even pioneering the selling of peanuts at the circus.

As for the tale of the evolution and popularization of nachos, at a Texas Rangers baseball game in Arlington in 1976, Liberto’s company “Rico’s” sold the very first “stadium nachos” featuring a jalapeno cheese sauce Liberto had come up with. The advantage here over melting grated cheese on the chips was that the gooey “cheese” sauce could be ladled up quickly and had a long shelf life.

Despite the sauce not actually being cheese (this according to the FDA), it was an immediate hit and outsold every other food item at the stadium in 1976. Even better for concessions business was that nacho sales also resulted in a large spike in beverage purchases, as you might expect from people consuming a sauce with jalapeno juice in it. Just as importantly, the introduction of nachos didn’t seem to negatively impact things like hot dog and popcorn sales. (This latter potential issue was a big concern Liberto frequently heard when first pitching his nachos to various event groups.)

Within a year of this, with an eye on moving more into the lucrative movie theater concessions industry, Liberto purchased Associated Popcorn, which was a major supplier to various theaters in Texas. This, combined with John Rowley of United Artist Theatres discovering Liberto’s nachos, saw gooey-cheesed nachos hit the concessions stands in theaters across the state.

As for how nachos became more mainstream nation-wide, this is thanks to their being served at the Dallas Cowboys’ Stadium in 1978. At the time, the Cowboys were known as “America’s Team” and often played host to ABC’s Monday Night Football. The announcing team for those games included the legendary Howard Cosell. The story goes (at least according to Liberto’s son) that while trying to fill dead air during a blowout, Cosell groped around for things to talk about and remarked on how delicious his snack was- these new “nachos.” Whether that was really his original motivation or not, Cosell did indeed begin to describe plays on-air as a “nacho,” as in “that was a nacho run” and extolled the virtues of the tasty snack frequently. Not long after this, “stadium nachos” were in every stadium across the country thanks to Cosell’s near constant promotion of the word – and food – nacho.

Unfortunately, “Nacho” Anaya Sr. died in 1975, so was never able to see a version of his culinary invention being talked about in front of a nationally televised audience, nor see it become a hit nation-wide. Today, there’s reportedly a bronze plaque up in Piedras Negras that honors the creator of this “Mexican hors d’oeuvre”. Additionally, October 21st is considered International Day of the Nacho. No matter the day or the place, however, according to Anaya’s granddaughter in an interview with the San Antonio Express-News in 2002, nachos today just don’t taste as good as the original. She states, “The chips are different. They’re not homemade chips like he used to do. Or maybe it’s the hands of the chef.”