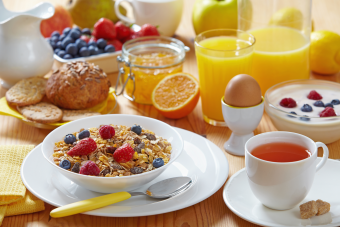 For kids who grew up in the 1980s and 1990s, it was sugary cereal commercials that dotted the television landscape, featuring lucky leprechauns, wise-cracking droids and adorable Gremlins. A common theme among all of them was advocating these products were a “magical part of a complete breakfast“, helping to ingrain that idea into our collective mindset.  Of course, anyone who has even a modicum of knowledge about proper nutrition knows that regularly partaking in a massive dose of extremely calorie dense, sugary cereal is not at all needed nor advisable in a “complete breakfast”. So how did we get here? What did people historical eat for breakfast and who was the first to claim eating cereals like mini-ETs was a nutritious way to start the day?

To begin with, both large groups of people eating breakfast and large groups choosing to skip it is nothing new. While The Iliad and The Odyssey make mention of soldiers and manual laborers eating a meal very close to the start of the day, with items on the menu being things like barley bread, olives, fig, and wine, many in the ancient world did not eat breakfast at all. In fact, as far as a set meal goes, it wasn’t uncommon to choose to only eat one large meal towards the end of the day.

For instance, according to food historian Caroline Yeldham, outside of the aforementioned individuals like campaigning soldiers and those who spent their days doing intensive manual labor, many Ancient Romans did not typically eat a morning meal, preferring the aforementioned one, very large meal a day eaten at about three or four in the afternoon. That said, those Romans who did eat a morning meal, with said meal called jetaculum, seem to have eaten things like bread, olives, raisins, cheese, and nuts, washing it down with some wine-based beverage, somewhat similar to the Ancient Greeks. As for the legionary on the go, they ate things such as a porridge made from wheat and barley soaked in water. In all cases, this was essentially pre-prepared or quick to make and eat food that provided what the body needed to sustain high energy output throughout the morning.

The trend toward abstaining from breakfast at all saw a huge upsurge during the Middle Ages, with many opting for a two meal system- one around noon and one in the evening. Eating a meal shortly after waking during this period in the Western world seems to have been largely considered a form of gluttony, as noted by 13th century priest Thomas Aquinas in his Summa Theologica.

That’s not to say nobody ate breakfast, however, even in this anti-breakfast era in the Western world. Those requiring a lot of calories to get through the day generally ate things like rye bread and beer in the morning, though it appears the more devout of these individuals tended to take their desire for a morning meal as a sign of moral weakness, and their giving into it as something of a sinful act.

Unsurprisingly given manual laborers tended to be poor, beyond being considered somewhat gluttonous, eating breakfast in this era also tended to be looked down upon by the affluent as something only poor people did.

It was also during this time that the midday meal, which, as mentioned, for many in the Western world was the first meal of the day, was actually called “dinner,” from the Old French word “disnar” which meant breakfast. So, in other words, lunch was breakfast and it was called dinner…

It was during the 14th and 15th centuries that adding a meal between last night’s feast and the midday one started coming into fashion for all classes. In fact, the English word “breakfast” dates back to the mid-15th century when it, unsurprisingly, literally meant to break the fast between two meals.

Within a few centuries, breakfast became normalized and there are records of it being pushed as the “most important meal of the day” going all the way back to the early 18th century, with those who could afford such items eating things like eggs, tea, and coffee, along with more classic breakfast items like breads, nuts, and fruits. In fact, by the mid-18th century, certain of the English elite even started building designated breakfast rooms.

This finally brings us to the 19th century and the more direct genesis of the sugary breakfast cereal we have today.

It was in this era that many Americans were suffering from dyspepsia, or indigestion, seemingly caused by a high protein / high fat diet largely composed of fatty meats and not nearly enough fiber. Symptoms included upper abdominal pain and bloating. To combat this, and other real and perceived ailments, alternate breakfast items began popping up, generally attempting to avoid meats and animal fats altogether. On top of this, with the industrial revolution, breakfast became less about socializing and more about quick consumption- the factory workers needed their caloric intake but didn’t have enough time to prepare or eat a full sit-down meal. Enter breakfast cereals.

The first modern, designated breakfast cereal (forms of porridge aside) was invented in 1863 by a vegetarian Christian abolitionist doctor named James Caleb Jackson. Created for his sanatorium patients as a healthy start to the day, it was comprised of crumbled, twice baked graham flour (which is essentially a type of non-bleached, “all-natural” finely ground whole wheat flour) and bran (hard outer layer of the grain), he called “granula”. The end product resembled a much harder version of modern Grape-Nuts, but with significantly larger nuggets. Jackson’s granula was reportedly so hard that it needed to be soaked in liquid for at least 20-30 minutes before it could be comfortably bitten into it.

As with Jackson, Kellogg and Post both pushed this food item as an ideal, healthy food to start the day with, setting the trend that has continued through today for this line of product.

Between Kellogg and Post, at the turn of the 20th century, Battle Creek became a battle ground for two companies that would come to define the world of breakfast cereal. For instance, legend has it that due to a mishap making a batch of the original version of Graham crackers (originally created by Presbyterian minister Sylvester Graham as a way to curb sexual urges, and particularly the urge to masturbate), John Kellogg and his brother Will invented a product they unimaginatively dubbed “Corn Flakes”. Post was a little more flamboyant, naming his version of the same thing “Elijah’s Manna”- meant as a striking allusion to the biblical story about the food that saved the wandering, starving Israelites. With the famed prophet sitting on a rock and hand feeding a raven on the front of the box, Elijah became the first cereal mascot. However, fairly quickly, religious groups protested and Post changed the name to “Post Toasties.”

Ultimately the Kellogg brothers split over Will Kellogg’s decision to recommend adding sugar to Corn Flakes to help it sell better, something Dr. John Kellogg found borderline blasphemous as such a thing, in his opinion, encouraged sexual excitement. The two parted ways with Will founding the Battle Creek Toasted Corn Flake Company, which went on to become the now billion dollar Kellogg corporation (which besides their tasty flakes was soon to also introduce another breakfast staple- Rice Krispies). His brother John Kellogg stuck to his original principles and continued to dedicate his life to ridding the world of such evils as masturbation…

Now, given the ladies of the house at this time tended to be the ones who decided what the family would eat, during the first few decades of the 20th century, cereal advertising was primarily aimed at housewives. Kellogg’s told women to wink at their grocer and see what they got (answer: a box of Corn Flakes). Quaker Oats likewise sponsored radio dramas and mid-day radio shows aimed at housewives. Post told moms that bringing up kids on their cereals would help them later in life.

In the late 1930s, as breakfast cereal became more established and commonly purchased anyway, cereal companies started thinking it might be best to skip the middlewoman, instead marketing directly to children, who presumably would pester their mothers for which cereal they wanted. For instance, in 1936, a “Dennis the Menace”-like character named Skippy was used to specifically market Wheaties to children. (Originally a comic strip, Skippy and his creator, Percy Crosby, have a particularly sad story).

The problem here is that children tend to not like straight bran or wheat… but they do love sugar. In 1939, the first pre-sugared cereal was produced, called Ranger Joe Wheat Honnies. Ironically, the product was actually an effort by the creator to minimize how much additional sugar kids commonly put on their cereal by including a relatively small, regulated amount already. But instead of curbing the practice of over-sugaring cereal, it eventually resulted in the opposite, starting with Post copying Ranger Joe Wheat Honnies with their own version called Sugar Crisp in 1949; thanks to a major breakfast cereal producer now making such a pre-sugared product, the rest of the industry followed suit.

By the 1960s, cereal companies were devoting approximately 90% of their advertising budgets to directly appealing to individuals of the youthful persuasion. This is why it is so common today to have “prizes” in the cereal box, tie-ins with movies, video games, and TV shows, and products called Sprinkles Spangle and Ice Cream Cone Cereal. On that note, this is also why adding more and more sugar to breakfast cereal became a thing.

As for widespread claims by the manufacturers that these cereals are “part of a complete breakfast,” technically the cereal companies are not lying here. Unsurprisingly given that the three primary nutrient groups, known as macronutrients, that humans need to survive are carbohydrates, proteins, and fats, according to the American Chemical Society, a healthy breakfast should consist of mostly carbohydrates and proteins. Shocker, I know.

And, indeed, cereal, even if it’s simply a bowl of pure sugar, constitutes carbs. So these products can indeed technically be considered an essential part of a complete breakfast, just perhaps not an advisable one given the vast majority are essentially candy cleverly marketed to appear nutritious, often complete with a giant label on the side showing all the vitamins added to the product… along with tiny recommended serving sizes that nobody even comes close to following to mask the absolute massive number of calories and sugar most real-world servings of the products contain. But to be fair, combined with certain other breakfast items, in extreme moderation this staple of the breakfast world could potentially be useful if one leads a very physically active life, instead of just rolling out of bed only to very soon after sit at a desk all day and then come home and sit on the couch until bed time.

On that note, perhaps those sedentary, wealthy aristocrats of old were on to something in choosing to skip the morning meal. And for those who led a heavily manual labored life, it is perhaps no surprise that some form of grain-based morning meal seems to have been the choice people made throughout most of recorded history- easy to quickly eat and comprised of a mix of simple and complex carbs to provide both quick and relatively longer lasting stores of energy, all while avoiding too much protein and fat which, while otherwise essential for life and important for things like maintaining muscle mass, might not sit well when eating mostly that in the morning and then jumping right into hard labor.