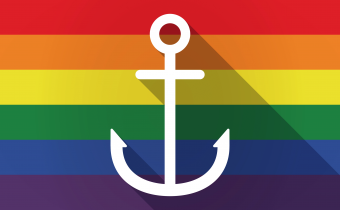 While the Ancient Greeks had their celebrated Sacred Band of Thebes, a legendarily successful fighting force made up of all male lovers, in more modern times the various branches of the United States military have not been so accepting of such individuals, which brings us to the topic of today- that time in the 1980s when the Naval Intelligence Service invested significant resources into trying to locate a mysterious woman identified only as “Dorothy” who seemed to have links to countless gay seamen. The plan was to find her and then “convince” her to finger these individuals so the military could give them the boot.

This story all starts with a naval crack down to try to get rid of any gay personnel in the early 1980s.  One Mel Dahl, who was completely open about the fact that he was gay when he was questioned about it upon enlisting in 1980, was kicked out in 1981 after being interviewed for a security clearance upgrade and once again letting the Navy know he was gay. This time they weren’t so accepting of that information. During the course of Dahl’s subsequent legal battle with the Navy over his discharge, he noted to the news media that there were quite a lot of gay men at the Great Lakes base he had been stationed at.

This information did not go over well with the military brass who launched a full scale investigation of the base to try to identify these individuals.

Specifically, as reported in Conduct Unbecoming: Gays and Lesbians in the U.S. Military, by Randy Shilts, the U.S. Navy spent a considerable amount of money sending investigators to gay bars in the Chicago area to try to discover these gay sailors. During these trips, investigators noticed that many gay men in the area identified themselves as “friends of Dorothy”. The Intelligence Service deduced that “Dorothy” must be a woman that functioned as a sort of information hub that gay men could use to find other gay men. If they could only find her, they figured they could convince her to talk, perhaps outing many of the gay navy personnel in the process, who in turn, with a little pressure, could no doubt out many others.  The key was simply to find Dorothy.

Thus, the NIS tasked investigators with returning to the same gay bars to clandestinely ask questions about this mysterious woman. Unfortunately for them, they failed at finding Dorothy, wasting an amazing amount of taxpayer money paying investigators to pose as gay men, drinking and breaking it down in 1980s era gay bars.

This said, other investigations they conducted seem not to have been so fruitless, with the Defense Department noting that, in total, 1,976 members of the various branches of the U.S. military were kicked out for being gay in 1981 alone; a reported 55% of these individuals were ousted from the Navy- all at a massive cost to U.S. taxpayers. As noted by one discharged gay Air Force captain interviewed by Shilts, it cost the Air Force somewhere in the range of four to five million dollars to train him when factoring in the exceptionally high cost of aircraft time in that training.

(As an interesting aside, for a time it was perceived that the military was unfairly targeting gay men, while not cracking down nearly so hard on lesbians in their ranks. As a result, in 1990 Vice Admiral Joseph S. Donnell issued a memo urging his subordinates to root out lesbians in the Navy, not just gay men. As to how lesbians were to be identified, he wrote, “Experience has shown that the stereotypical female homosexual in the Navy is hard-working, career-oriented, willing to put in long hours on the job and among the command’s top professionals…”  We can’t make this stuff up.)

In any event, at this point you might be wondering who exactly was this “Tokyo Rose” of the gay community and how did she have so many gay friends?

As it turns out, she was none other than Dorothy Gale of The Wizard of Oz…

You see, for over a half century now the phrase “Friend of Dorothy” has been considered a euphemism for “gay”. The phrase, sometimes simply abbreviated to FOD, is believed to have first popped up sometime in the 1940s as a way for gay men to identify themselves as such to others without outright saying it.

As you can imagine, in areas where the laws of the land and/or the general populace were strongly against said individuals, being able to say “I’m a friend of Dorothy” instead of “I’m gay” was a major boon. After all, if said individual was speaking to someone who was also gay, the other person would probably know exactly what they were saying. If not, likely they’d think the individual knew some woman named Dorothy who they mistakenly thought was a mutual acquaintance.

While there are alternate speculative theories as to the origin of the phrase, based on the evidence at hand, as mentioned, it is generally thought to have been inspired by the popular 1939 film The Wizard of Oz and/or the 1909 book it is based on.

It is also noted that Judy Garland herself ultimately became exceptionally popular among the gay community throughout her adulthood, while the film is popular for its message of inclusivity in spite of differences. To quote the Gay Times on the matter:

Dorothy’s three companions on her trip to Oz have long been read as gay, and for good reason. The Tin Man, the Scarecrow, and the Cowardly Lion are misfits who do not conform to their perceived ‘roles’. The Scarecrow is unable to frighten anything – crow or otherwise; the Tin Man constantly needs lubing up; and the Cowardly Lion seems to prefer mincing to roaring. This ostracisation is familiar to many gay guys – who are often accused of being less masculine than straight guys.

On that note, Dorothy happily accepts the somewhat effeminate “Cowardly Lion” who eventually identifies as a “friend of Dorothy,” and earlier on states, “I’m afraid there’s no denyin’, I’m just a dandy lion,” with “dandy” generally referring to an often effeminate man seen as overly preoccupied with fashion. (For more on this, see Why Did Yankee Doodle Stick a Feather in His Cap and Call It Macaroni?)

Books continuing the story also include similar themes, characters and moments that likewise resonate with the LGBT communities. Most famous of all is a quote from the book, The Road to Oz, in which Dorothy responds to a character saying she has “queer friends” by saying:

The queerness doesn’t matter, so long as they’re friends.

Of course, the word “queer” here is roughly understood to be a synonym for “odd” or “unusual”, but, as with so many other bits of the books that are not actually thought to have been references to homosexuality, it nonetheless struck a chord among gay fans who responded well to the idea of accepting someone regardless of how different others found them- it was their character that was the only thing that was important.

A mere decade after The Wizard of Oz first made its debut on the big screen, “Friend of Dorothy” had become one of the most popular euphemisms used by gay people to refer to themselves- a fact the rest of the world were largely oblivious to, allowing gay people to discretely identify themselves as such at a time when doing so may have been illegal where they lived and/or potentially dangerous.

Unsurprisingly given changing attitudes and laws today, the phrase “Friend of Dorothy” isn’t nearly as widely known among those of the youthful persuasion in the LGBT communities, and many with a few more years under their belts have less need to use the phrase than they once did, so it is dying out somewhat. However, one place you’ll still occasionally hear it is aboard cruise ships, where an announcement like “Friends of Dorothy are meeting in the lounge on Deck 7 at 8 pm” is sometimes made.