Do People Really Fish With Dynamite?

Kyle S. asks: Do people really fish with dynamite like they show in movies? 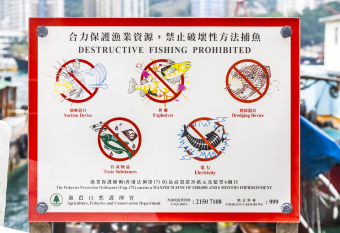 Fishing with dynamite, or blast fishing as it’s more accurately known, despite sounding like something more suited to a Looney Tunes cartoon, is a genuine and well-documented practice that is still commonplace in select areas of the globe today. This is more than a little unfortunate for the many fish and marine animals that call the oceans and lakes their home due to the invariably cataclysmic impact the practice has on local aquatic ecosystems.

Exactly when blast fishing first began is hard to pinpoint, but it should come as no surprise that it seems to have become popular within decades of dynamite being invented in 1867 (incidentally invented by Alfred Nobel, known today for the Nobel Prizes, but in his time as “the merchant of death”). While someone probably fished using improvised or homemade explosives prior to the invention of dynamite, the creation of a commercially available, relatively safe to handle and inexpensive explosive made it an option for the wider public.

As for the first documented references to this method of fishing, while it is certain that there were many earlier instances, the first we could find was an 1894 reference to a man being arrested for the crime of blast fishing, as reported in the New York Democratic Herald:

John Tickwich was arrested at Binnewater for destroying fish in one of the Binnewater lakes with dynamite.  He had just exploded a number of cartridges, killing several hundred fish, and was gathering them into his boat when arrested.  The prisoner will be taken before the State Game Protectors of Albany.  Five years is the penalty for the crime.

Another early reference to blast fishing likewise comes from it being banned, this time in Hong Kong. In 1898, the government asked fishermen to stop blast fishing and that the fisherman police themselves over the matter. The governor also issued the following statement to fishermen: “The practice of fishing by means of dynamite is unnecessarily destructive and contrary to the spirit of true sport.”

As you might imagine, little seems to have changed as a result of this request, so the government stepped up their game on the issue, officially outlawing blast fishing in Hong Kong in 1903.

Despite the governments of the world seemingly realising blast fishing was a bad idea pretty much right from the start, this method of fishing’s popularity quite literally exploded throughout the world thanks to WW1 and WW2. Soldiers from both sides of each conflict made extensive use of explosives in fishing while stationed in foreign countries, a practice locals took notice of and copied. As an example of this, Japanese soldiers stationed in the Pacific during World War 2 are noted to have given out hand grenades to locals to be used for fishing. In return, the locals were required to share the fish they’d catch with the soldiers.

As a result of this, many Pacific islanders became incredibly adept in the handling of various explosive devices. This is knowledge they put to use after the war, taking advantage of the numerous explosives left behind to construct their own makeshift fishing bombs. For instance, on the small island nation of Palau, even as late as the 1960s, huts could be found containing large caches of undetonated WW2 explosives, with the compounds within the devices, or the devices themselves, slated to be later used for fishing.

As the availability of unused munitions from World War 2 dwindled, the islanders began to use more commercially available explosives or, more often for small time fishermen, simply constructed their own using readily available materials. For instance, former blast fisherman Abdul Karim Laing noted that all one needs is a bit of fertilizer, gasoline, matchsticks, and a beer bottle to make a very effective explosive for fishing with. But as you might imagine, such home-made bombs can be very dangerous and fishing in this way tends to make the practice not only devastating for marine life, but occasionally for the humans doing the fishing as well. 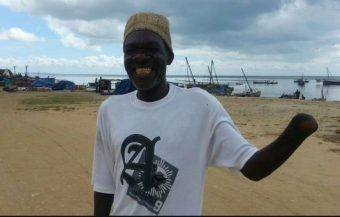 For instance Mwanya Sleiman, a former blast fisherman in Tanzania who has since become a staunch opponent of the practice, accidentally blew off both of his hands when a home-made explosive detonated when he was trying to light the fuse. As for why he used to fish this way, he noted, “My motivation was just the money I got from selling the fish but I didn’t know about the impact it would have on me or the underwater environment.”

Speaking of Tanzania, blast fishing is outlawed there due to it not only negatively impacting tourism, but also because they’ve seen a drastic decline in fish stock as a result. As one Tanzanian fisherman lamented,

Blast fishing destroys the fish habitats under water where fish reproduce and that has had a big impact, especially on us who use ring nets to fish…  The number of fish has drastically reduced we are not able to catch many fish like before…

He also stated that reporting blast fishing did little good in the region because “When [the blast fishermen] are arrested, they bribe and come back, and if they find out that you reported them they mark you and threaten to hurl explosives on your boat, so sometimes we are scared to report them.”

Speaking of this, while blast fishing is technically outlawed by most countries of the world, it remains incredibly popular in places such as the Philippines, Indonesia and coastal African nations both due to the general apathy of local law enforcement and how much easier it is in the short term to get a big catch this way.

The latter point is, of course, the key reason blast fishing is considered so difficult to stamp out. When a fisherman can acquire what would otherwise be his entire daily quota of fish using more traditional netting methods in a few minutes by hucking a few well-placed, extremely inexpensive explosive devices into the ocean, there’s little incentive for many of them to do it the hard way. We can scoff at the shortsightedness of these individuals, but it’s important to note that many are completely ignorant of the long term damage they’re doing to the fisheries they depend on. And even for those who know, they have families to feed, often with few resources to do it, and may not be overly concerned about what will happen years down the line if they continue blast fishing.

So what’s the problem with blast fishing?  To begin with, as alluded to previously, there is the danger posed to the fishermen (often using home-made explosives) and potential swimmers and scuba divers (particularly a problem in touristy coastal areas).

Another big problem is the efficiency of this method of fishing. Blast fishing works by bursting the air bladders and sometimes other organs of the fish in the immediate area. The result is that some of the fish float to the surface to be collected. However, it’s estimated that approximately ten times that amount go the other way and sink to the bottom as a result of the ruptured air bladders.

Beyond this all being incredibly inefficient, it should also be noted that according to one fish trader in Tanzania’s Dar es Salaam fish market, she tries to stay away from blast fishing caught fish, because she claims the fish caught in this way “rot very fast – by the time you get home they are rotten. Some buyers and sellers don’t know that so they buy them.”

But these aren’t the biggest problems with blast fishing.  For that, we have to look at what the blasting does to the ecosystem of a relatively large area around the explosion.

Explosives are, by their very nature, somewhat imprecise in their targeting, making the act of fishing with them unsustainable as they will invariably destroy countless other marine creatures besides the fish, as well as their underlying habitats like coral reefs. Most critical for the fishermen, this ultimately destroys the habitat for the fish themselves. This means the fish that survive in the area now have fewer resources to live on, and in many cases their normal breeding grounds are destroyed, further reducing the fish population beyond what the initial blast does.  Unsurprisingly from this, as with Tanzania, areas where blast fishing is prevalent tend to see a rapid decline in fish stock.

Nevertheless, blast fishing remains a problem in some regions, even where authorities have made a concerted effort to crack down on it. That said, perhaps the cleverest way to stop blast fishermen we could find was implemented in the Philippines where authorities dropped statuettes of the Virgin Mary underwater across the country’s coastline and announced it to the public. This cut instances of blast fishing almost overnight as many fisherman from the predominantly Catholic region didn’t dare risk harming an image of one of the most revered figures of their faith.