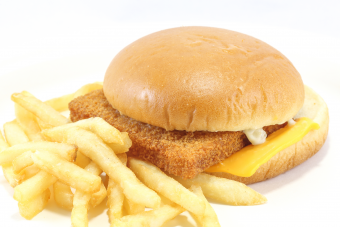 The Filet-O-Fish is one of the more curious items on the McDonald’s menu in that it receives virtually no advertising whatsoever, yet still continues to be sold by the chain despite the fact that it seems like nobody ever orders one and it’s been a problem item for years for the company due to difficulty in finding a sustainable, tasty source of fish meat at the volume the behemoth needs, as well as the fact that it requires a separate fryer to cook in than their other items. As it turns out, they keep it around because the Filet-O-Fish is actually intended to be eaten by a very specific kind of customer- people who abstain from eating non-seafood meat for religious reasons.

According to McDonald’s executives, approximately 23% of the Filet-O-Fish sandwiches sold by the chain each year are sold during Lent. While the exact rules vary somewhat from region to region, in general, Catholics traditionally abstain from eating most meats on Fridays and Saturdays during this period. In some regions, the requirement is even that members of the Church avoid non-seafood meat on every single Friday of the year.

Moving on, or rather, back, the genesis of the Filet-O-Fish came way back in the early days of the future fast-food king. (See: Who is McDonald in McDonald’s?) In 1960, at a small McDonald’s restaurant in Monfort Heights, Ohio, the owner of the franchise, a man called Lou Groen, was struggling to keep his restaurant open.

No stranger to troubles, or hard work, Groen had been kicked out of his home by his father as a teenager. (His mother abandoned the family when he was 3 years old to pursue an ill-fated career as an actress in Hollywood.) Homeless during the Great Depression, with no real skills to speak of, and occasionally having to steal food to survive, Groen did eventually find work, and then continued to better his situation by simply working harder than everyone else around him.

Fast-forward a couple decades and he found himself the president of the Cincinnati Restaurant Association. It was in this position that he had a chance encounter with one Ray Kroc, the god-king of the McDonald’s empire, which led to Groen taking his life’s savings, as well as borrowing some money from a few friends, and starting a McDonald’s franchise in 1959.

Unfortunately for Groen, this was a time when pretty much no one had heard of McDonald’s and he was competing with a lot of other restaurants that sold more or less the exact same thing he sold- burgers.

As a result of all this, this hardworking father of two was barely able to keep the then-fledgling franchise location open. As Groen would later recall: “I was struggling. The crew was my wife, myself, and a man named George. I did repairs, swept floors, you name it.”

Needless to say, despite working from sunup to sundown and relying on the free labor of his family, times were tough- especially on Fridays, a day which would normally be the most lucrative day of the week for most restaurants. You see, Groen’s restaurant was located in an area that was 87% Catholic. At the time in the United States, most Catholics abstained from eating land or air-based meat products every Friday of the year, not just during certain days of the week during Lent as is more common today. The result? According to Groen, his restaurant barely grossed $75 a Friday. After factoring in franchising cuts, product costs, building bills, etc, he might as well have just started closing on Fridays.

What confused Groen was that other restaurants in the area, like Big Boys locations, which offered more or less the same fare as he did, seemed to be doing fine, both in general and on Fridays. So he decided to do a little recon to see what they were doing differently. What Groen found was that, in addition to standard items like hamburgers and the like, they also sold fish, which as noted can be eaten in lieu of other meats by Catholics on Fridays. (Aside- interestingly, according to the Archbishop of Westminster, Vincent Nichols, vegetarian or vegan Catholics, who already observe this tradition by default, are advised to abstain from another food on Fridays during Lent as penance.)

With this information in hand, Groen went back to his restaurant and began workshopping a new idea for a fish-based sandwich. After a lot of experimenting, he came up with a recipe for a battered halibut patty that would form the basis of the Filet-O-Fish. But operating under the McDonald’s banner, he couldn’t just put it on the menu. So, in 1961 Groen tried to pitch the idea to Ray Kroc, who immediately shot him down. Not pulling any punches, Groen later stated Kroc told him: “You’re always coming up here with a bunch of crap! I don’t want my stores stunk up with the smell of fish.”

With his restaurant about to go under and his ability to provide for his children at stake, Groen persisted, eventually convincing Kroc to let him trial the fish burger for a single day, but Kroc had a few stipulations. First, Groen had to figure out how to make the sandwich cheaper since corporate wanted to sell it for 25 cents (about $1.98 today). This was a problem considering Groen’s halibut patties cost approximately 30 cents to make. Groen addressed this by substituting the halibut for cheaper Atlantic cod and adding a single slice of cheese for extra flavor. Secondly, the sandwich would be in direct competition with another sandwich created by Kroc personally- The Hula Burger.

The Hula Burger, which was also envisioned by Kroc as a way of luring those who otherwise didn’t want to eat certain meats to the restaurant, literally consisted of a piece of grilled pineapple on a cold bun with a single slice of cheese as garnish…

Despite sounding questionably appetizing, Kroc was convinced that it would be a huge seller and confidently proposed a challenge. Both items would be added to the menu of a McDonald’s restaurant on Good Friday of 1962, and whichever sandwich sold more would be permanently added to the broader McDonald’s menu. This would make it the first new item to be added to said menu since McDonald’s became a nationwide franchise.

When Good Friday of that year rolled around, as Groen predicted, his Filet-O-Fish was a huge hit, selling 350 sandwiches in his franchise location that day. As for Kroc’s pineapple burger, Groen stated,

While Groen never found out how many of the Hula Burgers were sold, the rumour mill has it that the number was around a half a dozen sandwiches. Kroc also later noted, of those few who did buy it, their almost universal response to seeing it was something to the effect of “I like the pineapple, but where’s the burger?”  Where indeed.

With ample evidence that there was considerable demand for fish-based sandwiches, Kroc gave Groen permission to begin selling the Filet-O-Fish permanently. However, initially Groen sold the sandwich using his original, more expensive, Halibut recipe right up until the Filet-O-Fish was introduced to other McDonald’s franchises in 1963, at which point he was forced to switch to the cheaper Atlantic cod recipe. Eventually McDonald’s substituted even cheaper fish as stocks of Atlantic cod dwindled, resulting in pressure being placed on the company to search for a more sustainable option. (Finding a sustainable source of fish has been an ongoing problem for McDonald’s given the huge volume needed for even their lowest selling menu items. They currently use Alaskan pollock, having recently been forced away from Hoki, which was completely phased out in 2013.)

Despite being responsible for the first new item added to the McDonald’s menu in its young nationwide history (predating the better known Big Mac by about a half decade), Groen received no money for creating the sandwich. That said, he credited the Filet-O-Fish sandwich with saving his franchise, selling a whopping 2,324 of the Filet-O-Fish in the first month alone.

As business began to boom, he ultimately was able to purchase more McDonald’s locations, eventually owning some 43 franchises by the time he retired in the 1980s, combined grossing $60 million per year in sales (about $130 million today) and employing over 3,000 people. Needless to say, he retired a very wealthy man, though, given his hardworking nature, he chose not to settle down until his body made him, continually dabbling in various business ventures until a few years before his death on May 30, 2011 at the age of 93.  As he said in an interview in 2005 while recovering from back surgery (and shortly thereafter breaking his hip while on vacation):

I’m at life at 88 years of age and I’m bored. I see opportunities all around me. I drool. But Father Time is telling me, ‘Buddy, you’ve had your fling. Forget about it.’