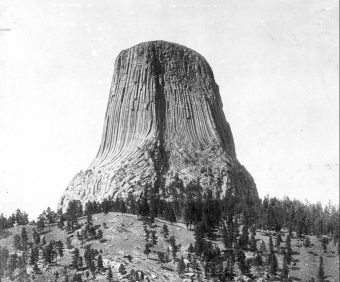 Nestled safely in the bosom of the Bear Lodge Mountains of Wyoming is a large rock formation known simply as  Devils Tower. A popular landmark and the first recognised United States National Monument (declared such by President Theodore Roosevelt on September 24, 1906), the imposing rocky butte was at the forefront of a bizarre media frenzy in 1941 when a parachutist became hopelessly stranded atop it.

That parachutist was a known daredevil called George Hopkins who made a bet for $50 (about $800 today) that he could parachute and land on top of the butte. Said bet was made with an eccentric entrepreneur called Earl Brockelsby who was known for, amongst other bizarre things, keeping a live rattlesnake under his hat, which he’d reveal and let people pet on occasion. (If you’re wondering how he came by a relatively tame, presumably de-fanged, rattler, he owned “Reptile Gardens” in Rapid City.)

Hopkins, along with wanting to win the bet, was hoping to very publicly show that it was possible for a skilled parachutist to land on a precise target. The approximately one acre sized area of flat rock atop the tower seemed like as good a place as any to demonstrate this. It should be noted here that Hopkins was by no means a slouch when it came to the burgeoning sport of skydiving. In fact, one of the ways he made a living was by leaping from burning planes for motion pictures.

In other words, he was fairly confident he’d be able to make the jump despite random, sometimes severe up and down drafts around the tower. However, he didn’t bother to seek permission from the National Park Service to land atop the rocky monolith, thinking that they’d just say no if he asked.

Instead, Hopkins told only a single newspaper reporter from the Sundance Times that sometime in the closing days of September he’d perform the stunt, promising them exclusive coverage of the event on the condition that they not tell anyone until after he’d done it.

With all the necessary preparations in place, on October 1, 1941, Hopkins took to the skies in a plane specially chartered for the stunt and leapt from it, making a beeline for Devils Tower.

Problems began almost immediately as Hopkins was nearly knocked off course by severe wind gusts. He ultimately managed to get over his target but was much too high, so partially collapsed his parachute, plummeting to the rocky plateau below. After a bit of a rough landing in which he reportedly was blown several feet across the rocks, hitting a boulder in the process, he was down and mostly unharmed. 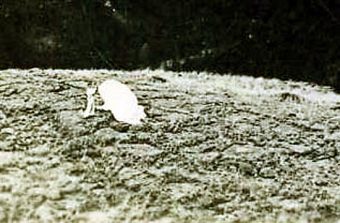 With seemingly the hard part out of the way, Hopkins stood and waited for his pilot, Joe Quinn, to throw him a specially prepared pack containing everything he’d need to descend the tower.

Hopkins then watched helpless as the supply pack sailed through the air and bounced straight off the edge of the tower, stranding him without supplies over 1000 feet (over 300 metres) in the air.

Before we get to what happened next, we should discuss the contents of the pack that had just dive-bombed to earth in front of Hopkin’s eyes. The pack contained nothing more than a sledgehammer, an old car axle that had been sharpened on one end, and 1000 feet of rope. Hopkin’s actual plan was to use the sledgehammer to drive the axle into the top of the rock, attach one end of the rope to it, then climb down. If you thought this plan was somewhat ill-conceived, it should also be noted that technically the 1000 foot of rope was not sufficient to get him to the bottom, but close enough where he felt he’d be able to safely climb the rest of the way down.

However, after realising he was stranded, another supply drop was organised, including another 1000 feet of rope. This time, it landed atop the tower. Unfortunately, they didn’t bundle the rope properly, so it unfurled while falling and landed in a giant mass of tangled knots that quickly froze when a large blanket of fog and snow rolled in. Frustrated at his inability to untangle the frozen rope, Hopkins threw a note off the end of the tower asking for a bottle of whiskey for “medicinal” purposes, which was later airdropped on his location along with various survival supplies, though for whatever reason they wouldn’t try dropping rope again. (It should be noted here that contrary to popular belief, drinking alcohol in frigid temperatures does not warm you up, it actually makes you colder and more likely to suffer hypothermia.)

The next day, news of Hopkins’ plight had reached the wider media who descended on the park along with thousands of tourists to gawk at him. Increasingly frustrated, Hopkins threw another note off the edge stating he’d like to attempt to parachute off, a proposal the authorities quickly put the kibosh on according to contemporary news reports, placating the daredevil by airdropping supplies to keep his spirits up. For instance, in an effort to keep him warm, this air drop included a “bear skin suit, a megaphone” and, we’re not making this up, but what was reported as “a medium rare steak”. No word on whether they put efforts into keeping it warm for its decent, or if he had to eat it cold. If the latter, no doubt this fact was reflected on his tip… 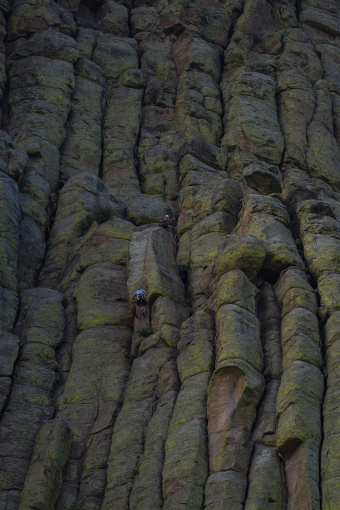 Over the next few days, several rescue attempts were made by experienced climbers, all of which were halted by ferocious winds and snow, including in one instance a climber slipping and falling, but being saved by a safety rope.

This forced the authorities to consider a number of other, more unorthodox alternatives to getting Hopkins down. These ideas included partially landing a plane with skis atop the tower and having Hopkins use his experience as a wing walker to leap onto the aircraft as it passed by. (The summit was thought too small to safely fully land on given the weather conditions.) They also considered borrowing an experimental Navy helicopter and using one of the Goodyear Blimps to rescue him via dangling a basket large enough to hold a human in. (see: The History of the Goodyear Blimp)

All of these ideas were abandoned due to the increasingly hazardous weather conditions, with the Goodyear Blimp plan coming the closest to happening before the giant skyfaring advertisement was grounded en route to the rescue.

So how’d Hopkins ultimately get down? Did they finally wise up and simply go back to the original plan of just dropping a lot of rope for him? Nope.

A Dartmouth student by the name of Jack Durrance notified the park service that he and a few of his climbing companions were willing to come try to rescue Hopkins. Just a few years earlier, in 1938, Durrance was involved in only the second successful free ascent ever to the top of Devils Tower with one Harrison Butterworth,

Durrance and co.’s journey to the tower this time, however, was delayed by poor weather, resulting in their flight being canceled. Instead, they took a train to Denver and then a car the rest of the way. When they arrived at the monument on October 5th, they noted that “When we got to Devils Tower, a sleet storm had gone through the area. The tower was nothing but a sheet of glass.”

Despite the extreme conditions, the next morning the crew, led by Durrance, began their slow and slippery ascent, with Durrance hammering pegs into the rock for the others as he went.  After almost nine hours of this, they finally reached the top. 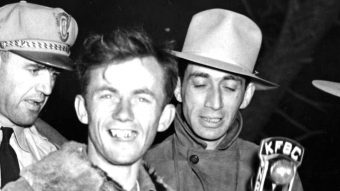 Once there, they found Hopkins in good spirits and good health, despite his five day ordeal at the top of the tower. They then showed him how to properly rappel down the mountain. (The fact that they felt the need to do this makes one wonder how Hopkins originally planned to use a rope to climb down…) After an uneventful descent to Terra Firma, Hopkins casually walked towards the masses and media seemingly no worse for wear and in a jovial mood, joking with those gathered that he needed a shave and a haircut, before asking Brockelsby where his $50 was.

In all, the park service recorded that over 7,000 people had visited the park to observe Hopkin’s ordeal.

A little over a month later, the United States would enter WW2, with Hopkins going on to join the airborne infantry division as an instructor in parachuting.

Though most all of Hopkins’ former skydiving records have since been broken, he still holds the distinction of being the only man to parachute onto the top of Devils Tower.  Given significant advances in parachuting technology since then making such a landing, while not trivial, not that terribly difficult either for an experienced skydiver, we can only assume the record hasn’t been broken because the park service presumably won’t allow such a landing today.