March 3, 2015 Melissa
Ryan K. asks: Given that they probably need to move their fins constantly to stay in place, do fish ever sleep? 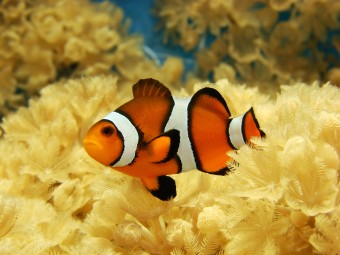 Less like sleep and more like suspended animation, most fish species do spend some time resting. And like us, if they don’t put in enough downtime, they try to make up for it later.

Sleep has a simple definition that includes closed eyelids and a particular brainwave pattern in the neocortex; as a result, it’s relatively easy for researchers to determine when a person, another mammal or a bird is asleep.

This definition is problematic, however, when it comes to fish, since they have neither a neocortex nor eyelids. As such, researchers have to rely on behavior observation to determine when they’re napping.

Typically when a fish is “sleeping,” four characteristics are observed: (1) inactivity for a long time; (2) a resting posture (like a droopy tail); (3) a routine (like resting at the same time, and in the same manner, each day); and (4) decreased sensitivity to its environment (hard to arouse).

Different species of fish snooze in different ways. For example, tilapia have been observed resting at the bottom of their habitats, while brown bullhead catfish were found napping at a 10-30 degree angle along the bottom, with their tails flat and fins stretched out. In addition, some species of bass and perch were seen sleeping on or under logs, while fish around a coral reef often hide in its crevices at night

In many fish species, during this period of rest, lower cardiac and respiratory rates are observed, as are decreased mouth, gill and eye movements. For several, like the bluehead and requiem shark, the decreased sensitivity to disturbance is so profound that researchers have been able to pick them up and haul them toward the water’s surface without stirring any reaction.

Interestingly, some fish species never seem to sleep. Both mackerel and bluefish swim constantly, and although they swim less at night than during the daytime, they remain responsive to stimuli 24-7. Another night-owl, the California horn shark, is far more active at night, although even during the day it remains responsive to disturbances. Others that never seem to sleep, but may actually catch 40 winks now and then, include many fish that live in large schools. One theory holds that while some members of the group have their eyes peeled, others are able to enter a kind of daydreaming restful state.

Some chichlids and threespine sticklebacks will forego sleep while their eggs are incubating – not necessarily to protect them, but to fan them (thereby providing a continuous supply of oxygen to the brood).

Some species of sleep-loving fish will work to catch up on lost sleep. In a 2007 study, several researchers ruthlessly pestered a group of zebrafish by alternately tapping on the aquarium and even piping noise in through an underwater loudspeaker. Completely deprived of sleep during their normal 6 hour dark period, the next day, the researchers left the tank dark and observed that the zebrafish were significantly harder to arouse, and their normal mouth and gill movements had been cut in half.

Tapping on tanks seems to be a popular method with fish-sleep researchers, and in 2011, some NYU biologists used the technique to determine that cave fish don’t sleep much when compared with their surface-dwelling neighbors.

Observing four species of fish all indigenous to northeast Mexico, a surface-fish species, Astyanax mexicanu, as well as three cave-dwellers, Pachón, Tinaja and Molino, the scientists discovered that the surface fish slept about 4 times more than cave fish (800 minutes in 24 hours compared with 110-250).

Easily as seemingly sadistic (to those of us who love sleep) as the zebrafish researchers, the NYU biologists also experimented with depriving the Mexican fish of sleep – by moving their containers once every minute. Sure enough, the fish lost sleep, and like their zebrafish cousins, they caught up on it by sleeping more the next day.