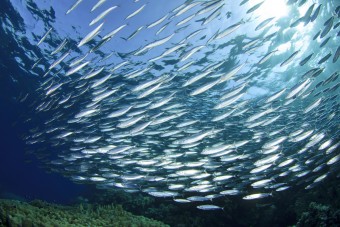 In addition to being an occasional biological necessity, human flatulence has served a variety of uses, including as a way to clear a room, entertain friends, torture a sibling, and tease a child (pull my finger). But while some humans have elevated farting to an art form (see: The Most Famous Farter in History), perhaps no entire species has elevated farting quite so high as the school-swimming herring, who use their butt vapors to communicate.

Bubbling out of a herring’s back end, the fish farts come fast and furious, and as such scientists have named them “Fast Repetitive Tick sounds” or (I’m not making this up) FRTs. Occurring in “stereotyped bursts of 7-65 pulses . . . lasting 0.6-7.6” seconds at a time, the high frequency FRTs are emitted, as with many human farts, in “a single continuous burst train rather than intermittent bursts.” Believed to be the result of “gas expulsion . . . via the anal duct,” the fish acquire the gas when they surface to fill their swim bladders (not from digestion), although they can save this air for at least a day and release it when needed.[1]

Because of when and how the fish break wind, scientists believe the farts are used to communicate, although they’re not clear on what the herring are saying. By experimenting with disturbances and even adding a bit of “shark odour” to the study (neither of which had any effect on the farting), they concluded that the FRTs are not alarm calls; likewise, as FRTs were being emitted but nobody was getting busy, the researcher also discerned that the farts were not involved with mating (as any female of any species could’ve told them ;-)).

However, as herring work together in coordinated groups, and even shoal together in the dark, the researchers hypothesized that the FRTs were used as “contact calls.” They note that this social communication would only make sense if it couldn’t be heard by predators (who would then be wise to the herring’s location), and it turns out the frequency of most FRTs, at above 2 kHz, is outside of the “known auditory range of most predatory fishes.” Although they also note that FRTs are within the range of hearing of marine mammals.[2]

In any event, this explanation is plausible, and would help explain how herring typically shoal, which is in a grid pattern where the distance between each fish matches the distance that their desired prey will jump away. By emitting noxious gases (which in humans is a long-practiced way of establishing a safe distance between individuals), the fish establish the precise interval between school members for optimal fishing.

The intrepid researchers who discovered this miraculous use of butt gas, Ben Wilson, Lawrence Dill, Robert Batty, Magnus Whalberg and Hakan Westerberg, were honored with an Ig Nobel Prize in Biology in 2004, for their achievement in science that makes people first laugh, then actually think. Other noted Ig Nobel Prize winners include a group that discovered that strippers earn more when they are at their peak fertility than otherwise (One can only imagine the significant time they had to spend at strip clubs FOR SCIENCE!!!); a group that discovered that when people have a strong urge to pee, they consistently make better decisions with certain types of things and worse decisions with others; and, of course, Sir Andre Geim, who won an Ig Nobel Prize in 2000 for successfully figuring out a way to levitate a frog using magnets. A decade later, he also won a real Nobel Prize “for groundbreaking experiments regarding the two-dimensional material graphene.” (Other humorous, yet thought provoking Ig Nobel Prize winners and their research can be read here.)