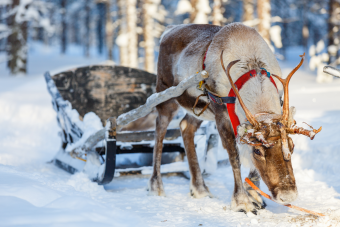 Unlike Santa, elves or even clean coal, reindeer are real. They may not fly, but there’s a good deal of truth around the many myths of Christmas’s favorite animal. Yes, they do live in extremely cold conditions. Yes, they are known to pull sleds. And, yes, their noses really do turn a shade of red given the right conditions.

First off, caribou and reindeer essentially are the same animal and are classified as the same species (Rangifer tarandus). They are also both part of the deer family, or cervidae, which also includes deer, elk and moose. However, there are subtle differences. “Reindeer” is often used to describe the domesticated animals, the ones that are herded and employed by humans to pull sleds. They are also often smaller and have shorter legs than their wild brethren. In addition, the name reindeer is more often used to refer to the European variety, ones that live in Siberia, Greenland and northern Asia.

The word “caribou” tends to mean the North American (meaning living in Canada and Alaska) and/or the wild variety. Because caribou are wild and reindeer are domesticated, scientists agree that most of the differences between the two are evolutionary as opposed to inherent. Caribou are larger, more active, faster and migrate further than reindeer.  In fact, the caribou undertake the largest land migration of any animal in North America every year in search of better conditions and food for their young.

Antlers are the defining characteristic of many large deer and Rangifer tarandus certainly have large antlers (in fact, they are the largest and heaviest antlers of any living deer species). However, there are differences between their antlers and other deer. Unlike other deer species, both male and female Rangifer tarandus can have antlers, but they possess them at different times of the year depending on gender. Males start growing them in February and shed them in November. Females start growing them in May and keep them until their calves are born sometime in the spring. This has led many to note that Santa’s reindeer (including Rudolph) would technically have to be all female because males usually shed their antlers by November- only females have them through the Christmas season.

For both caribou and reindeer, cold climates are where they thrive. Covered in head to toe with hollow hairs that trap in the air and insulate from the cold, they are built for the tundra and high mountain ranges. Their hooves and footpads also are adapted for frigid temperatures, shrinking and contracting in the cold which exposes the rim of the hoof. This allows them to gain better traction by cutting into the ice and snow.

Another cold weather adaptation is that the animal’s nose does, in fact, turn red. In much the same manner as humans, caribou and reindeer have a dense amount of blood capillaries in their nasal cavities – actually 25% more than humans. When the weather turns particularly cold, blood flow in the nose increases. This helps keeps the nose surface warm when they root around in the snow looking for food; plus, it’s essential for regulating the animal’s internal body temperature. This results in a reddened nose, matching Santa’s own cold weather red nose.

It’s believed reindeer were domesticated by native peoples (particularly by the Nenets) at least two thousand years ago in northern Eurasia. Reindeer bones have been found in ancient caves in Germany and France, meaning they once roamed much of Europe. Old Chinese annals dating back nearly eighteen hundred years ago also mention domesticated reindeer. Over a thousand years later, Marco Polo also wrote about tamed reindeer in his journals. People used reindeer in much the same way we use horses today, to transport people and supplies. There is even a good deal of evidence that humans used to milk reindeer.

To this day, there are still certain peoples (including Scandinavia’s Sapmi, Northern Europe oldest surviving indigenous people) who have come rely on reindeer domestication. Native peoples in Serbia and Canada (where again, they are called caribou) use reindeer for clothing, work, food and to even pull sleds. In fact, they are thought to be more powerful than an average horse and can run up to forty miles an hour even with an attached sled. Beyond horse-like chores, reindeer meat is also an important food source and has come to be considered something of a delicacy. (There’s even reindeer jerky).

While reindeer seem to be a pretty obvious animal to help Santa on his Christmas travels, they didn’t become part of the Jolly St. Nick story until the 19th century. In 1821, a New York writer named William Gilley published a children’s booklet where Santa and reindeer were first mentioned together: ”Old Santeclaus with much delight, his reindeer drives this frosty night.”

Later, Gilley would write that he knew about reindeer living in Arctic lands from his mother, who was from the area. A year later, Clement Clarke Moore would anonymously publish his poem “A Visit from St. Nicholas,” otherwise known as “The Night Before Christmas,” co-opting the idea and popularized it as part of Christmas lore.

Although it should be noted in his version he describes St. Nick riding a “miniature sleigh” with “eight tiny reindeer” that had little hooves. This, of course, explains how St. Nick was able to fit down a chimney- he was a tiny little elf.

In the 20th century, it was department stores that pushed the reindeer and Christmas narrative even further. Working with businessman Carl Lomen – who had become known as the “reindeer king of Alaska” for selling the animal’s meat across the state – Macy’s put on what may be the first Christmas display featuring Santa, a sleigh and real reindeer in 1926.

Thirteen years later, the department store (now-defunct) Montgomery Ward distributed a coloring book featuring a cute little reindeer with a nose “red as a beet..twice as bright.”  The author was an ad man named Robert L. May who, after writing the initial draft of the story, perfect it with the help of his four year old daughter.

May’s boss did not like Rudolph the Red-Nosed Reindeer at first, as he felt a red nose implied the reindeer had been drinking.  However, once it was partially illustrated by Denver Gillen, who worked in Montgomery Ward’s art department and was a friend of May’s, his boss decided to approve the story.

After the war, demand for the story skyrocketed, receiving its biggest boost when May’s brother in law, radio producer Johnny Marks, created a modified musical version of the story.  The first version of this song was sung by Harry Brannon in 1948, but was made nationally popular by Gene Autry’s 1949 version, selling 2.5 million copies of that version in 1949 alone and has sold to date over 25 million copies.

Interestingly, despite the fact that May created the story of Rudolph and it was wildly popular, he did not initially receive any royalties for it because he had created it as an assignment for Montgomery Ward; thus, they held the copyright, not him.  In a rare move for a business, in 1947, Montgomery Ward decided to give the copyright to May with no strings attached.  At the time, May was deeply in debt due to medical bills from his wife’s terminal illness. Once the copyright was his, May quickly was able to pay off his debts and within a few years was able to quit working at Montgomery Ward, though just under a decade later, despite being quite wealthy from Rudolph, he did go back and work for them again until retiring in 1971.

Today, reindeer (and caribou) are still found in cold, tundra climates across the northern world. Unfortunately, at least according to one study, reindeer populations globally are plunging. If things don’t improve for them soon, they may become as fictional as Santa himself.