July 19, 2016 Karl Smallwood
Gracen A. asks: What is original flavor bubblegum supposed to taste like? 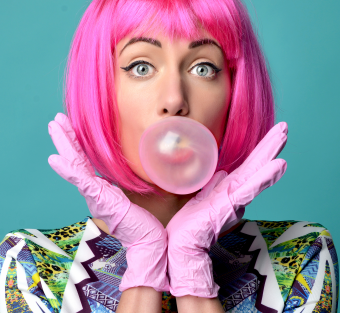 Bubblegum, the ambiguously flavoured, obnoxiously pink candy gum that is the favourite treat of Violet Beauregarde and, seemingly, a shocking amount of stock photo actors was first invented in 1928 by an accountant called Walter Diemer. Despite being asked in dozens of interviews throughout his life, Diemer took the secret of what he was shooting for in the flavour of bubblegum to his grave, and the company that owns the rights to the recipe likewise isn’t talking. But we’ll get to that in a bit. First, the story of how bubblegum became a thing.

In 1928, Walter Diemer was working as an accountant for the now defunct candy and baseball card manufacturer, Fleer. At this time, Fleer was struggling financially when then President of the company, Gilbert Mustin, hit upon the idea of creating its own gum base to improve profit margins (at the time they bought their gum product from another manufacturer before repackaging and selling it).

Towards this end, Mustin began tinkering with recipes, but was frequently called away from his work to answer the building’s only phone which was on the first floor, while his office and the mixers were on the third. Accordingly, whenever Mustin was called away, Diemer (who worked in an office next door) was called upon to watch over the latest gum batch or lend a hand when necessary.

Over time, Mustin began to trust the 23 year old accountant to such an extent that he was allowed to experiment on his own time, a perk Diemer took frequent advantage of, often spending many hours after a shift mixing random flavors together and tinkering with the Fleer gum base recipe in an attempt to improve it.

Following in the footsteps of numerous inventors we’ve talked about before, Diemer claims he stumbled  across the formula for bubblegum partially by accident after about a year of tinkering. In his own words: “It was an accident. I was doing something else, and ended up with something with bubbles.”

That said, as with many of these supposed “accidents”, this isn’t quite correct. Diemer’s goal was always to create a kind of gum you could blow bubbles with. The “accident” was perhaps that his day job was actually that of an accountant, and his tinkering was decidedly non-scientific. So, while it’s nice to think that Diemer accidentally mixed a bunch of chemicals together and stumbled upon a lotto ticket recipe, the reality is that he spent many hundreds of hours meticulously mixing batches of gum together in the hopes of getting the formula for bubblegum just right, coming remarkably close to doing so on several occasions only for the results to not repeat when mixed again.

Diemer’s inspiration for bubblegum was an earlier, never released prototype product created by Fleer’s founder, Frank H. Fleer, in 1906 called Blibber-Blubber. Like bubblegum, Blibber-Blubber could be used to blow bubbles. However, the gum would stick to teeth, lips, and cheeks, was much too wet and had poor elasticity, resulting in any bubbles you managed to blow popping quickly, splattering saliva everywhere, and then adhering tightly to your face and lips.

While Diemer’s exact recipe isn’t publicly known, he claimed he was able to fix the former problem by adding some unspecified amount of latex, resulting in a more elastic, and less sticky, gum. That said, this wasn’t the only tweak needed as in his earliest near hits at inventing bubblegum, the resulting gum worked perfectly at first, but had an extremely short shelf-life due to an issue with hardening up within a matter of hours after being made. It was this problem that was eventually “accidentally” fixed by Diemer, though he never publicly mentioned how he fixed it, nor why the solution was supposedly accidentally stumbled upon. (Today, wax is typically added to the gum to keep it soft at room temperature and some form of powder, like corn starch, is used to keep it from being too sticky.)

Whatever the case, after inventing bubble gum, Diemer scaled up the recipe and created 300 pounds of it. This brings us to why bubblegum is nearly always pink. According to Diemer, when the time came to add food colouring to his first proper batch of bubblegum, the only colouring the company had on hand was pink, which just so happened to be his favourite colour. (Around this time, pink was actually considered a masculine colour and blue a feminine one, see: The Surprisingly Recent Time when Boys Wore Pink, Girls Wore Blue, and Both Wore Dresses.) With no other choice available to him, Diemer poured an entire bottle of pink food coloring into the mixer, giving the candy its now iconic, obnoxiously loud colouration. Over the years as more companies attempted to create competing products, they similarly coloured it pink, leading to it becoming the go-to colour for bubblegum.

Ultimately Fleer settled on the name “Double Bubble” for the product, deciding to individually package the candy in a manner not too dissimilar to how pieces of taffy are traditionally sold and then sent 100 sample pieces to a small store located at 26 Schenectady Street, Philadelphia. The store sold out within a day, prompting Fleer to make several more tons of the bubblegum and begin widely marketing it. In the first year of bubble gum sales alone, Fleer sold $1.5 million worth of the gum (about $21 million today), literally saving the company, though Diemer himself never received a dime extra for his non-accounting invention.

Nevertheless, in recognition of his integral role in the creation of the product that saved the company, Fleer promptly fired Diemer from his role as company accountant and made him an executive of sales, including paying him to train salesmen on how to blow bubbles so that they could demonstrate the product to potential customers.

Originally priced at just a penny, bubblegum proved to be immensely popular with depression-era customers and, as a result, Diemer’s job, which he formerly was close to losing due to the company being close to going under, proved to be both secure and rather lucrative during one of the most financially taxing times in American history.

While he received no royalties from the product, as the years passed, Diemer was paid to travel the globe promoting Double Bubble, eventually being promoted to senior vice president and serving on the company’s board of directors. He continued to hold the latter board seat for some 15 years after he retired in 1970.

Even after retiring, Diemer’s love of bubblegum never subsided and he could frequently be found literally riding an adult-sized tricycle around his retirement village in Pennsylvania throwing handfuls of free bubblegum (of which he was given a lifetime supply by Fleer) to local children. He also reportedly occasionally invited neighborhood children over for bubble gum blowing parties.

According to Diemer’s second wife, Florence, who he married at the age of 91 (his first wife, Adelaide, died in 1990, 4 years after their two children both died in 1986, though at least leaving them with many grandchildren and great-grandchildren), he made it explicitly clear late in life that he didn’t care about not receiving any money for his creation, something that would have made him enormously wealthy had he patented it. As the man himself noted shortly before his death at the age of 92 on January 9, 1998, “I’ve done something with my life. I’ve made kids happy around the world.”

This brings us around to what the standard flavour of bubblegum is supposed to taste like. The original formula used by Fleer was intentionally never elaborated upon and the recipe is now considered to be a trade secret in the same vein as products like Coca Cola and Pepsi. (And, note, contrary to popular belief, it is not true that only two people know the recipe for Coca Cola.) As such, we don’t know exactly what flavours and in what quantities they are used to create the iconic flavour of “bubblegum”.

Digging a little deeper, we have a rough idea of the base flavour ingredients based on interviews with Diemer, who claims he originally used a combination of “wintergreen, peppermint, vanilla, and cinnamon” in unspecified quantities to come up with the flavour for the first ever batch of bubblegum. This contrasts slightly with other sources who contest that bubblegum flavour is actually created using a “mixture of several natural and artificial fruit flavors”, usually strawberry, pineapple and banana in varying quantities.

The truth is, though, that “bubblegum” as a flavour can be synthesized using a multitude of chemicals in any number of combinations. So, in the end, the flavour is an artificial construct with no analogue in nature. Given this, the answer to the question “What is bubblegum supposed to taste like?” is, well, bubblegum.