10 Common Items That Were Invented by Accident 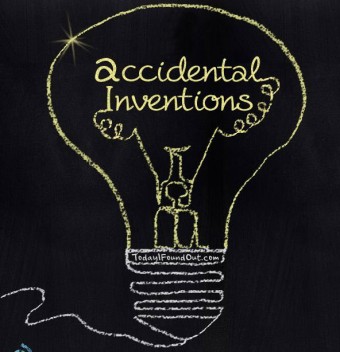 1) Teflon: Roy Plunkett, a chemist who worked for DuPont in the early 20th century, accidentally stumbled across the non-reactive, no stick chemical while experimenting with refrigerants, specifically looking for a non-toxic chemical to use for a refrigerant. After storing tetrafluorethylene (TFE) in gas form in small cylinders and having it frozen, the gas unexpectedly turned into a waxy solid.  Further experimentation showed this wax had some interesting qualities, such as the most well known one, it is one of the slipperiest substances known to man.  Dupont quickly patented it and today we know it as Teflon.

2) Post-It Notes: In 1968 Spencer Silver, a chemist working for 3M, stumbled across a “low-tack” adhesive while he was trying to make a super strong adhesive for use in airplane manufacturing. Silver thought the low-tack adhesive that left no residue and was somewhat reusable had value, but nobody agreed with him. He campaigned for its use for 5 years before someone at 3M listened and even then it took another 7 years of development, 3 of which where the Post-It Notes were made, but were just used internally because management at 3M thought they had very little commercial value.  Finally, they tried some test markets to sell the Post-It Notes and they flopped in the four test cities.  Nobody wanted them.  They tried one last ditch effort, giving them away for free to numerous businesses.  After that, everybody wanted them and today Post-It Notes are one of the most purchased office products in the world.

3)  Plastic:  In the early 1900s, shellac was the material of choice when it came to insulation. But due to the fact that it was made from Southeast Asian beetles, the material was not the cheapest thing to import. For this reason, chemist Leo Hendrik Baekeland thought he might be able to make some money by producing an alternative. What he came up with, however, was a moldable material that could be heated to extremely high temperatures without being distorted… plastic.

4) Microwave: Every single guy in the world should be grateful to Percy Spencer, a true genius who was an orphan and didn’t even finish grammar school (as an adult, though, he self educated himself to an amazing extent, teaching himself everything from calculus to metallurgy, and becoming one of the world’s leading experts in radar tube design).  While working as a radar specialist, he was tinkering around with microwave emitters and standing in front of one when he noticed the chocolate bar in his pocket had melted.  He soon ran some experiments, including exploding an egg, and realized the potential for microwaves to cook things. The year was 1945 and the world, or rather the kitchen, hasn’t been the same since.

5) Vulcanized Rubber: Charles Goodyear had spent ages trying to find a way to make rubber resistant to heat and cold. After a number of failed attempts, he finally stumbled across a mixture that worked. Before turning out the lights one evening, he accidentally spilled some rubber, sulfur, and lead onto a stove resulting in a mixture that charred and hardened but could still be used.

6) Play-Doh: Maybe it comes as no surprise that the smelly, gooey stuff kids have been playing with for decades was originally used as wallpaper cleaner. In the mid-20th century, however, people quit using coal to heat their homes which meant their wallpaper stayed relatively clean. Luckily for Cleo McVicker, the owner of the company that made this wallpaper cleaner (they had previously just copied the recipe from a common homemade wallpaper cleaner), his sister-in-law discovered another use while teaching children – modeling clay.  At her suggestion, they took out the detergent ingredient, added the almond scent and coloring and Play-Doh was born.

7) Super Glue: While developing plastic lenses for gun sights, Harry Coover, a researcher at Kodak Laboratories, stumbled across a synthetic adhesive made from cyanoacrylate. At the time, however, he abandoned his discovery. Nine years later, though, it was “rediscovered”, again by accident, this time Coover was supervising a project to try to develop heat resistant acrylate polymer.  During this project, one of his underlings, Fred Joyner, rediscovered super glue after making it and accidentally sticking two prisms together.  This time, when Coover heard of Joyner’s “discovery”, he decided not to abandon it and Super Glue, as a commercial product, was born.

8) Slinky:  During World War II, when navy engineer Richard James was developing a horsepower monitor for battleships which employed special springs to keep the instruments steady when out in the ocean, he accidentally dropped one of them. To his amusement, the spring “walked” from his desk onto a stack of books, and landed upright on the floor.  He and his wife immediately saw the potential for a toy.  He perfected the tension on the spring and the Slinky was the result. Like Post-It Notes, though, people needed to be shown what it did before they bought into it.  After making about 400 Slinkies, funded off a loan, and convincing a store to display them at Christmas, not a single one sold.  After several days, James himself went to the store to demonstrate the product.  All 400 Slinkies sold within 90 minutes of him doing this.

9)  Popsicles:  It was 1905 and soda pop had just become the most popular drink on the market. 11 year old Frank Epperson decided he wanted to try saving some money by making his own at home. Using a combination of powder and water, he got pretty close but then absentmindedly left the concoction out on the porch all night. Temperatures ended up dropping severely and when he came out in the morning he found his mixture frozen with the stirring stick still in it.  At first he didn’t do anything with this other than make himself tasty Popsicles every now and again, he was 11 after-all.  But 17 years later, he realized the commercial potential of Popsicles after he served them at a Fireman’s ball and everybody loved them.  A year later, he made a business out of it, and the rest is history.

10) Saccharin:  You know that pink packet of fake sugar that’s always sitting on the restaurant table? Well, as sweet as it is, you may be surprised to know where it came from. In 1879, Constantin Fahlberg, a chemist trying to find alternative uses for coal tar, came home after a long day of work only to notice that his wife’s biscuits tasted a lot sweeter. After asking her about it, he realized he hadn’t washed his hands after work, and voila, artificial sweetener.