August 10, 2015 Samantha
Jeff G. asks: How do they get the M on M&Ms without breaking it or missing any? 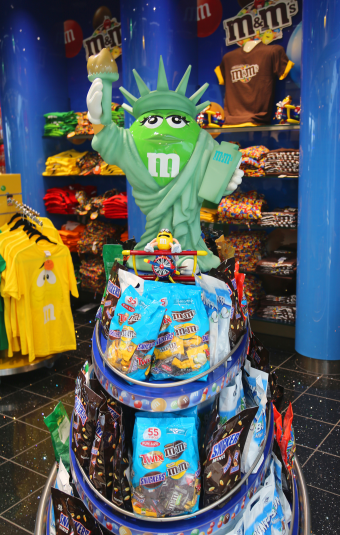 Most of us have probably wondered how each M&M is so perfectly marked with that signature white m. The production of the candy that “melts in your mouth and not in your hand” includes many different steps.

First, the chocolate concoction is made and then poured into small round molds to form the cores of the M&Ms. These chocolatey centers are tumbled to create smooth circular surfaces, which will then be covered with a colorful liquid coating.

Once the exterior liquid has dried to form the hard shell, each candy piece ends up held in an indentation on a conveyor belt that whisks them away to be stamped with the signature m. The actual process for applying each m is similar to the offset printing process. So, what is offset printing?

Offset printing is widely used to produce high quality images on a variety of materials such as paper, canvas, or, in this case, candy. Essentially, this type of printing means that rather than having an image directly stamped onto a piece of material, the image is transferred, or offset, to an intermediate surface first.

This intermediary rubber blanket is particularly needed in the case of M&Ms which are relatively fragile and rounded. By careful design and calibration of the press, the rubber blanket only presses against the candy just enough to transfer the m without damaging the outer shell of the M&M.

This printing method also significantly reduces the wear on the master metal plates, so they last much longer. This is good considering on average around 2.5 million M&Ms are branded with an m each hour.

Of course, with this type of volume, it is nearly impossible to ensure each candy piece is shaped perfectly, particularly with peanut M&Ms which are not particularly uniform. As a result, despite careful calibration, some M&Ms do make it through the production process without an m. However, these are not considered rejects by any means. Rather than risk cracking the hard outer shell, the printing machine is designed to let overly misshaped M&Ms pass through without being stamped. In other words, the lack of an m on an M&M candy is totally intentional. Waste not want not and all that.

Incidentally, if you’ve ever wondered what the “Ms” stand for in the name “M&Ms,” wonder no more- In 1941, Forrest Mars Sr., of the Mars candy company, struck a deal with Bruce Murrie, son of famed Hershey president William Murrie, to develop a hard shelled candy with chocolate at the center.  Mars needed Hershey’s chocolate because he anticipated there would be a chocolate shortage in the pending war, which turned out to be correct.

The deal gave Murrie a 20% stake in the newly developed M&M; this stake was later bought out by Mars when chocolate rationing ended at the end of WWII.

The name, thus, stood for “Mars & Murrie,” the co-creators of the candy.