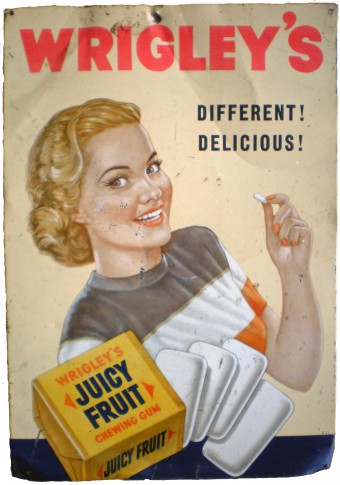 With a brand recognition rate somewhere close to 99% in the States, it’s pretty safe to say that almost everyone reading this has at least heard of Juicy Fruit gum, if not also chewed it at some point. The question we’re looking at today is- exactly what fruit is Juicy Fruit supposed to taste like and does it actually contain any dehydrated juice from that fruit?

Now you’d think that answering this question would be as simple as picking up a pack of Juicy Fruit gum and reading the ingredients list, but as with most things in life, we discovered it’s just not that easy. For starters, the ingredients listed on a pack of Juicy Fruit are incredibly vague; the only real piece of useful information you can glean from a pack itself is that the gum contains “Natural and artificial flavors”. Helpful…

This also isn’t helped by the fact that Wrigley, the company who make Juicy Fruit, are similarly coy about discussing what goes into their product, often choosing to refrain from mentioning any specific fruit in regards to its flavour and excusing this evasive behaviour by stating that the flavour is a trade secret.

That said, with a little digging, you’ll find that, in the past, Wrigley has explicitly said that Juicy Fruit contains notes of “lemon, orange, pineapple and banana” in response to emails from curious customers asking for more specific information about Juicy Fruit’s flavour. Again though, this isn’t entirely helpful in discerning whether or not the gum actually contains fruit juice, since (always awesome) science has made it possible to synthesize almost any flavour we want. 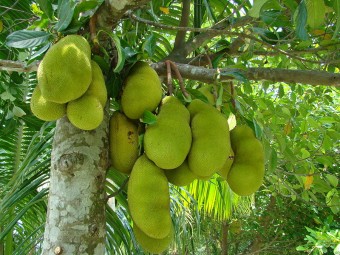 Curiously, there is a fruit out there known to taste almost exactly like Juicy Fruit- a lesser known fruit from the shores of Africa and Asia known as Jackfruit. Jackfruit tastes so much like Juicy Fruit gum that it is often one of the first things mentioned when it’s discussed by Western media and there is a small, but nonetheless dedicated subset of people who believe that it is the key secret ingredient in the gum.

However, although Jackfruit tastes like Juicy Fruit gum, this isn’t because Juicy Fruit contains any juice from the Jackfruit (a dead giveaway being that there are no records of Wrigely importing the fruit or juice). The real reason the two taste and smell so similar is because they both (probably) contain a chemical called, isoamyl acetate. The reason we have to say “probably” is because, as noted, Wrigley won’t confirm what exactly goes into making Juicy Fruit, which is their right as a company, but experts are still pretty sure that isoamyl acetate has something to do with Juicy Fruit.

One of the most compelling arguments for isoamyl acetate being the primary flavouring agent behind Juicy Fruit is that, like Jackfruit, the chemical is said to smell very similar to it. Even in literature that doesn’t mention Juicy Fruit by name, isoamyl acetate is said to have an indistinct, almost indescribably “fruity” smell that contains hints of banana, peach and other similar sweet fruits, which is pretty much the exact same way people who haven’t eaten Jackfruit describe Juicy Fruit.

Making this argument even more tantalising is that, historically, one of the few ways to obtain isoamyl acetate in commercially viable quantities was as a by-product of whiskey production. When Wrigley first began producing Juicy Fruit gum in 1893, they did so from a factory in Illinois, the biggest whiskey State in America at the time. Suggesting that, perhaps, Wrigley sourced isoamyl acetate, and hence Juicy Fruit’s unique flavour, from the many factories producing whiskey nearby. 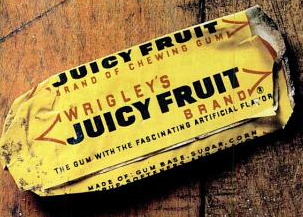 Perhaps the most damning piece of evidence of all about Juicy Fruit’s flavour being the result of artificially created chemicals instead of real fruit is that they themselves used to explicitly advertise the “artificial flavor” of their product as a unique selling point up until a few decades ago. You see, early packs of Juicy Fruit starting around the 1940s carried the slogan “The Gum With the Fascinating Artificial Flavor” which they used as a way of enticing customers to try it.

It is only in recent years, with the trend to avoid artificial chemicals in consumables, that Wrigley has shied away from advertising the fact that Juicy Fruit’s unique flavour is, in all likelihood, the result of artificially created chemicals rather than a cocktail of chemicals directly extracted from fruit.