How Did Harry Houdini Die? 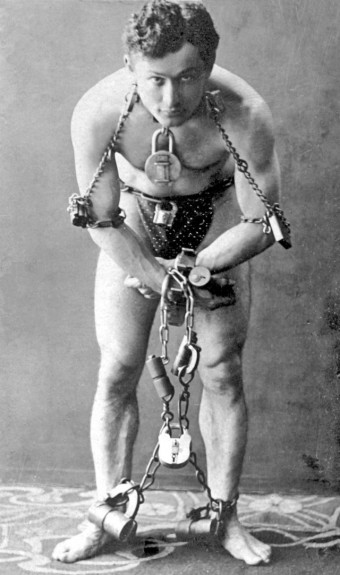 Few people in any field of human endeavor rise to become the unquestioned “top-dog” in their profession in their generation, let alone of all time. But ask almost anyone who the greatest illusionist / escape artist in history was and take the proverbial “dollars to doughnuts” wager that they’ll say “Houdini”.

The Houdini legend persists, and indeed, seems to grow even larger with each passing decade. But we’re not here to talk about Houdini’s life.  Rather, we’re going to discuss the truth about how he died.

Thanks to the hugely popular (and largely fictional) 1953 film Houdini, starring Tony Curtis, a common myth you’ll often hear concerning how Houdini died is that he drowned failing to escape from a water tank during a performance, having to ultimately be pulled from the tank as depicted in the film.

The real story of how Houdini died is very different.

When Harry Houdini and his entourage arrived at The Garrick Theatre in Detroit, Michigan on October 24, 1926, the Hungarian-born magician and escape artist was running a fever of about 102-104 degrees Fahrenheit. Two days before this, Houdini had been resting in his dressing room prior to a show in Montreal when a college student named J. Gordon Whitehead approached him. It’s difficult to determine exactly what happened from here as accounts from eye witnesses are slightly conflicting.  However, the general story seems to be that Whitehead asked Houdini if the claim that he could withstand any punch to the abdomen had any truth to it. Houdini assured him it was true and gave him permission to see for himself.

Whitehead immediately took a few jabs at Houdini’s mid-section while the magician was still reclining (he had recently broken his ankle in his famous Water-Torture Cell escape) and supposedly didn’t have a chance to prepare for the blows from the over exuberant Whitehead. The punches inflicted more pain than Houdini anticipated, and after a few fists to the gut, he motioned for Whitehead to stop. Despite the extreme physical pain that continued even after Whitehead ceased punching him, not to mention his broken ankle, Houdini insisted the evening’s scheduled performance must go on as planned.

By the time Houdini was heading for his next show in Detroit, his condition had deteriorated badly. He was running a high fever and, though refusing to go to the hospital, was nevertheless examined by a physician before the show. The doctor diagnosed Houdini with acute appendicitis and recommended he head immediately to the hospital for surgery.  Houdini refused and took the stage.

He began the performance with several vanishing acts, culminating with making a woman disappear and conjuring a flowering shrub in her place. He made it through the first act, but his conditioned worsened and he was forced to have his assistant finish the show.

After the show was over, Houdini headed back to his hotel to rest up, but his wife, Bess, reportedly “threw a tantrum” that he wasn’t going to the hospital and so a physician was called in to examine him yet again. The conclusion was that Houdini needed immediate hospitalization and surgery. Houdini was still not keen on the idea, but after consulting with his personal physician, Dr. William Stone, over the phone, he finally gave in an agreed to go to Grace Hospital in Detroit to have an emergency appendectomy.

Once at the hospital, it was established that Houdini had peritonitis due to a ruptured appendix. At the time, it was speculated that the aforementioned blows to his abdomen may have been the cause of his appendicitis. In fact, the conclusion made by the life insurance company, who then had to pay double indemnity because of their findings, was that the punches to Houdini’s abdomen had ruptured his appendix.

This was a reasonable diagnosis at the time, but today it’s generally thought that this likely did not play a direct role in his appendix rupturing as such cases are exceptionally rare and from accounts, it’s thought Houdini was already suffering from the onset of appendicitis at the time of the blows. That said, it has been speculated that the pain from Whitehead’s punches may have served to mask the true seriousness of the condition, with Houdini perhaps assuming he was suffering non-life threatening pains from the blows. In the era before antibiotics, the secondary infection caused by a ruptured appendix was almost always fatal, so it was critical to get the appendix out before this happened. Thus, the theory goes that had Houdini not been punched, he might have sought medical attention sooner.  However, this seems doubtful given that even as his condition worsened to life threatening levels, he still refused to heed the physicians who looked him over.

Whatever the case, as alluded to, doctors performed emergency surgery to remove Houdini’s ruptured appendix, but the damage was already done. Harry Houdini held on for about a week at Grace Hospital, but finally succumbed on October 31, 1926. He was 52 years old.

Despite the fact that Houdini believed spiritualism was a load of bunk and went out of his way to discredit it every chance he got, before he died, he promised his wife Bess that if he could possibly communicate “from the other side,” he would do so on the 10th anniversary of his death. At the appointed time, Bess attempted to contact Houdini during a séance held on Halloween, 1936, but to no avail.  Pretty much ever since, various purveyors of the paranormal have attempted to do the same on Halloween, but with just as little luck.