October 23, 2014 Karl Smallwood
Michael T. asks: Is it true that the thumbs up and thumbs down hand gesture came from crowds in ancient Rome voting on whether a gladiator should live or die? 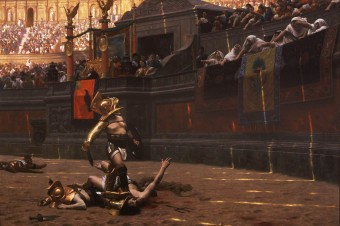 There are few hand gestures out there as well known or ubiquitous as the humble thumbs up. But why is this seemingly innocuous gesture so widespread; how did it come to mean “everything is okay” in so many cultures and where did it come from?

The commonly told origin is that it came from the Romans and their gladiatorial games: thumbs up meant live and thumbs down meant die. This is unequivocally false. While it is true that in the days of gladiatorial combat in the Colosseum and the earlier (and significantly larger) Circus Maximus, the audience could decide the fate of a fallen gladiator with a simple hand gesture, this isn’t typically depicted accurately and has little to do with why thumbs up and thumbs down means what it does today.

The fate of a gladiator, in terms of whether the audience was voting for a kill, was decided with what is known as “pollice verso”, a Latin term which roughly translates to “turned thumb”. More precisely what this means isn’t known and there are no accounts that have survived to this day that describe it in any real detail. As such, we’re unable to say for sure which way the thumb was supposed to be pointed if the audience wanted a given gladiator to be killed or if they could just wave their thumbs around at random, which it seems may well have been the case.

So that’s voting for death, what about life? The gesture to spare a given gladiator’s life seems to have been neither a thumbs up nor a thumbs down. Instead, you had to hide your thumb inside your fist, forming a gesture known as pollice compresso, “compressed thumb”.

The reasons for this has been speculated to be twofold: one, it made the decision of the crowd easier to discern, since it’s easier to tell the difference between a thumbs turned and a closed fist than a thumbs up and a thumbs down from a long ways away. And two, the gestures themselves are thought to be largely symbolic of what they represented- a pointed thumb represented the audience’s desire for the victorious gladiator to deliver his coup de grâce (stab the fallen foe), while a hidden thumb symbolised that they wished for the gladiator to stay his blade, sheathing it much in the way they’d hidden their thumbs. Hence why it’s thought “turned thumb” may well have been simply waving your thumb around in the air, perhaps in a stabbing motion.

However, this fact is largely absent from pop culture representations, most notably in the otherwise enjoyable 2000 movie, Gladiator, in which Joaquin Phoenix is shown giving a defeated gladiator a thumbs down to signify that he wishes for him to be killed. According to director Ridley Scott, that scene was inspired by a painting from 1872 called “Pollice Verso“. The painting (pictured above) depicts a victorious gladiator standing over the lifeless body of his opponent while a baying crowd jeers and delivers a tsunami of down-turned thumbs. Scott stated of the painting, “That image spoke to me of the Roman Empire in all its glory and wickedness. I knew right then and there I was hooked.” 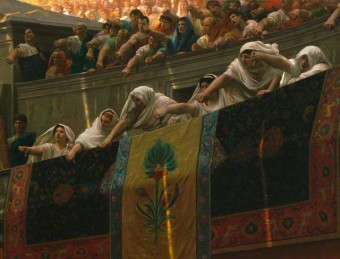 That particular painting has been noted by historians as the catalyst for why the concept of pollice verso is so poorly understood today by the masses. What makes this fact so surprising is that the painter behind the piece, Jean-Léon Gérôme, was a hugely respected historical artist who was internationally renowned for his “archaeologically correct history paintings”. Gérôme has been described as a “learned classicist” and was famous for extensively researching his pieces before putting brush to canvas. For example, with “Pollice Verso” Gérôme studied actual pieces of armor from the ruins of Pompeii so that the gladiators in his paintings looked authentic. Gérôme’s legendary attention to detail is probably the reason that his interpretation of pollice verso was so widely accepted by academics and why it was so widely disseminated, even after it was proven false.

As for what historians of his era thought, interpretations varied greatly from thumbs up meaning kill and thumbs down meaning live (and vice versa), to hidden thumb in fist meaning live and thumbs down meaning kill, and pretty much every variation therein.  Why Gérôme chose thumbs down isn’t known, or even whether he meant it as is often interpreted- “kill”. People predominantly interpreted the painting this way (and still do), but in truth there is no evidence that this was what Gérôme was going for.

So, if the Romans aren’t generally thought today to be the origin of the thumbs up gesture, who was? That isn’t known precisely and we’re left mostly with just guesses. But it might surprise you that the mass-popularity of thumbs up / thumbs down meaning as it does today is a fairly recent phenomenon, though gesturing with one’s thumb is prevalent in many cultures throughout much of history with varied meanings.

So what about some educated guesses as to the origin of the thumb gestures? If you ask linguist anthropologist Joel Sherzer of the University of Texas, the gesture (meaning something) likely pre-dates the Romans. He went on to say of Europeans, “The dichotomy of up meaning ‘positive’ and down meaning ‘negative’ pervades the language and gesture systems of Europe… The thumbs-up gesture probably originates from this contrast.” 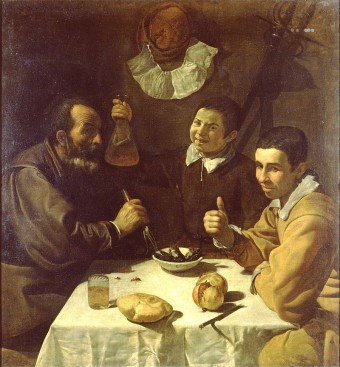 We can see evidence of this gesture in such images as the 1617 painting by Spanish artist Diego Velázquez titled, The Lunch, though what the gesture meant precisely in this case is open to interpretation.

As for a speculative theory that is a little more concrete, one of the more convincing theories of the origin of the modern meaning of thumbs up comes from Desmond Morris’ 1979 work, Gestures: Their Origins and Distribution. He states that it derives from a custom prevalent in medieval times where people making a deal would lick their thumbs and press them up against one another, rather like shaking hands today. It’s theorised that over time this diluted to the act of simply sticking one’s non-licked thumb into the air to symbolise approval.

Whatever the case, at the least, we do know how the meaning was so widely popularised. For this one, we need to fast-forward to much more recently in history- WWII. During WWII, the thumbs up gesture was used extensively by American pilots as a shorthand way of indicating to their ground crews that they were ready to fly.

It has been speculated that they got this from the Chinese, with specifically the Flying Tiger brigade of American pilots based in China seemingly being the first (or among the first) to popularly use the gesture, at least as far as photographic evidence from the era seems to indicate.  To the Chinese at this time, the thumbs up gesture meant “number one” or “nice job” depending on context. (Why this is the case is up for debate.) Whether it truly was adopted from the Chinese or some other source, the American pilot version initially meant “I’m ready” or “good to go”.

From here, things become much clearer. This “ready” meaning soon evolved into a simple, all-encompassing way to indicate that everything was okay in situations where verbal cues weren’t possible or advisable. It was also picked up by the rest of the American military who proceeded to make extensive use of the gesture during their many campaigns across Europe; in the process, it was picked up by the locals and soldiers from other militaries.

From there, the thumbs up symbol temporarily declined somewhat in popularity by the 1960s, but made a huge comeback thanks to Hollywood, and particularly Fonzie and his two thumbs up “aaaaaaaaay” gesture in Happy Days which debuted in 1974.

Today, thanks to the widespread use of thumbs up meaning “like” or “good” and thumbs down meaning the opposite on numerous popular websites and apps, this meaning of the hand gesture is likely not going anywhere for the foreseeable future.