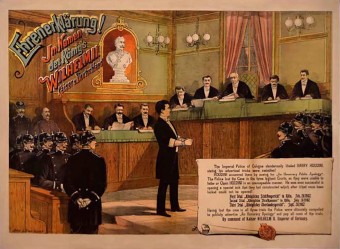 In 1901, the Cologne, Germany newspaper, Rheinishe Zeitung (RZ), published a story titled (translated) “The Unmasking of Houdini,” in which a chief of police, Schutzmann Werner Graff, accused Houdini of attempting to bribe him into rigging an escape from the city’s jail, and of paying another man, Herr Lott, to help him with a phony performance.

Held in Cologne, at the first trial, on February 26, 1902, Graff testified that Houdini had offered him 20 marks in exchange for Graff giving him both his “handcrafted lock” and a duplicate key. Graff also testified that Houdini had another man (named Lott) secretly provide him with a duplicate chain to display, after he would appear to have freed himself from the first chain, although really, according to Graff, he just sawed through it.

Of course Houdini denied the charges and claimed that Graff had, in fact, attempted to deceive Houdini by providing him with an inoperable or “dead” lock, and that, since Lott had warned him of Graff’s deception, Houdini offered Lott some compensation for that information.

Witnesses were presented for the defense and the plaintiff, although no clear conclusion could be drawn. To solve the matter definitively, the chairman of the case asked Houdini for a demonstration. Locks, as well as chains, were placed around him. Houdini first banged one lock against a metal plate he had fastened on his leg, which weakened the spring, enabling him to open the lock. Then Houdini and the judge went to a corner of the court (in an attempt for Houdini to keep some of his secrets), where Houdini showed the judge his method for freeing the chains. The judge and jury were convinced, and Houdini won.

Undeterred, Graff sought a second trial with a higher court, the Strafkammer, where the second proceeding was held on July 26, 1902, and at which some of the “highest officials of Cologne” testified for the defense. Here, a lock manufactured by master mechanic Kroch, claimed to be of such a construction that once locked “nothing would open it . . . even the key,” was used to chain Houdini. According to contemporary reports, he then:

walks into the room selected by the jury where he could work unhindered. In four minutes, with a quiet smile, reenters the court room, and hands the judges the prepared lock opened.

Graff remained unrepentant and pursued the matter with Germany’s highest court, the Oberlandesgericht, where the third trial was held on September 26, 1902. Houdini again prevailed. Graff was found guilty of “openly slandering” Houdini and was fined 30 marks. Houdini was awarded his expenses and an amount to compensate him for lost bookings (both also paid by Graff), as well as “An Honorary Apology” that was to be publicly advertised.