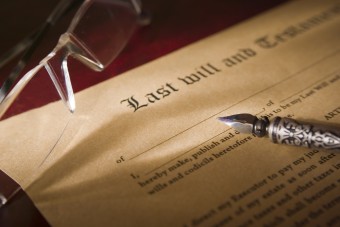 Today I found out what happened to billionaire Howard Hughes’ money when he died.

Over his lifetime, Howard Hughes’ wallet became one of the fattest of his time. It isn’t known exactly how much he was worth at the time of his death, but ten years before he died, he was forced to sell his shares in the airline company TWA. The payout? $546 million (about $3.8 billion today), estimated by some to have been about 1/3 of his net worth.

When he died, there was one major problem: Hughes had no direct descendants or immediate family, and he didn’t leave behind a will. At least, that’s what authorities were forced to conclude after an extensive search for one. After contacting his various banks, lawyers, and employees, every hotel he’d ever stayed in, posting classifieds in various newspapers, and even consulting a psychic, they were forced to accept that settling the massive estate was not going to be an easy matter.

So just where did all of that money go after his death?

Most assumed he wanted the money to go to the Howard Hughes Medical Institute. It was well-known that he didn’t want the money falling into the hands of any distant relatives, but without hard evidence, distant cousins and others began snatching for the cash.

A battle ensued between the temporary administrator of the Hughes estate, cousin and lawyer William Lummis, and those who ran the Medical Institute. It was a multi-state war, with Nevada, California, and Texas all claiming to be responsible for the distribution of the state, and all of which had their own laws about inheritance.

While the various parties were fighting it out, a couple of different wills surfaced, though eventually thrown out as fakes. A notable one was the three-page document that declared Melvin Dummar, a gas station attendant, was to inherit 1/16 of Hughes’ fortune. Supposedly, Dummar once picked Hughes up off the side of the road and gave him a ride to his hotel, and Hughes was so grateful that he left Dummar a huge chunk of money. In 1978, the will was thrown out as a forgery.

Next, “wives” started emerging from Hughes’ past, taking advantage of his reclusive reputation to explain why no one had heard of them before. Terry Moore, an actress, claimed to have married Hughes twice, but provided no documentation to support her assertions.  She did, in fact, once live with Hughes in the 1940s, but her claim that they were not only married, but never divorced, was called into question given the fact that she married three times after her supposed marriage to Hughes. Nevertheless, she must have put forward a good argument, or at least pestered the estate managers so much that they decided to pay her just to get rid of her, because she was paid $400,000 by the estate. Later, Moore wrote a book titled Beauty and a Billionaire which made the bestseller list, likely lining her pockets a bit more.

In addition to supposed wives, an extraordinary number of Hughes’ supposed children decided to acknowledge their deceased father. One was said to be the lovechild of Hughes and Amelia Earhart—product of the Mile High Club?—even though Earhart never had any children. At least two were black, but their claims were thrown out as Hughes was known to be quite the racist.

After years of struggle trying to sort the people with legitimate claims from the fakers who were in it to try to grab some of the cash, a lot of the money did end up going to the Howard Hughes Medical Institute. However, a huge chunk of it also went to various Hughes heirs. According to the Wall Street Journal, around 1000 people have benefited from the estate, including 200 of Hughes’ distant relatives. After liquefying many of his assets, they collectively were awarded about $1.5 billion.

Interestingly, the liquidation of the estate wasn’t completely finalized until 2010—34 years after his death. The last piece of the puzzle was the Summerlin residential development. In 1996, Rouse Co. (now General Growth) agreed to buy the Summerlin land from the Hughes’ estate on a 14-year repayment plan. With that, finally, the estate of Howard Hughes was laid to rest.