June 22, 2015 Melissa
Kerrey23 asks: Where did the expression “dollars to donuts” come from? 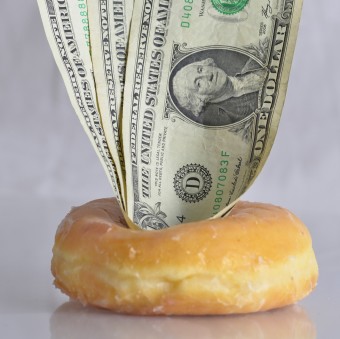 The word “doughnut” is American in origin and traces its roots to the early 19th century. It is presumed to have been a combination of the words dough and nut. It first appeared in print in Washington Irving’s 1809 Knickerbocker’s History of New York

Sometimes the table was graced with immense apple-pies, or saucers full of preserved peaches and pears; but it was always sure to boast an enormous dish of balls of sweetened dough, fried in hog’s fat, and called doughnuts, or olykoeks —- a delicious kind of cake, at present scarce known in this city, except in genuine Dutch families.

The holes in doughnuts were first noted in print in 1861, when it was used to describe how little a person consumed: “Her brother James, who never talked anything but nonsense when he could help it, declared she ate nothing but the hole of a doughnut.”

It has often been claimed that the holed doughnut was invented just shortly before this in 1847 by one Captain Hanson Gregory, see: Why Do Doughnuts Have Holes.

The alternate spelling “donut” is said to trace its roots to 1870 and “Josh Billings,” although after doing a review of the 1870-1879 edition of Josh Billings’ Old Farmer’s Almanac, it appears to only reference doughnuts (and, incidentally refers to them as “greasy,” but in a good way).

In any event, “dollar” is a much older word, tracing its roots back to the Low German daler and first appearing in English in the 1550s. It has since been used to describe a variety of currencies, most notably for the topic at hand, the U.S. dollar in 1786.

So now we have “dollars” and “doughnuts,” but when did someone get the bright idea to put them together? “Dollars for doughnuts,” or alternatively “dollars to doughnuts,” meaning a “safe bet,” or a “sure thing,” seems to have first popped up, at least in its documented form, in a February 6, 1876 edition of the Daily Nevada State Journal:

Whenever you hear any resident of a community attempting to decry the local paper . . . it’s dollars to doughnuts that such a person is either mad at the editor or is owing the office for subscription or advertising.

It again appeared in that same newspaper a little over a month later on March 11, 1876 where it stated, “Several Benoites took advantage of the half fare tickets offered to those who were to attend the ball given by the railroad boys at Carson last night, and attended it. It’s dollars to doughnuts all enjoyed themselves.”

Given that the newspaper used the expression without explaining it or otherwise giving emphasis, it is likely the author felt that people would already be familiar with the phrase, so it had probably been around in slang for at least a few years up to this point, if not longer.

As to why “dollars to doughnuts,” beyond the alliterative qualities, it was essentially just a way to say you’d bet dollars to something mostly worthless, relative to the dollars, emphasizing how sure you are that you’re correct.

Going back to the 1840s, there was a very similar expression with the same basic meaning “dollars to dimes.” Two other similar expressions also existed in the 1880s “dollars to dumplings” and “dollars to buttons.” A couple decades later, “dollars to cobwebs” also popped up, but none of these had the staying power as “dollars to doughnuts.”  In all cases, the latter thing is the worthless item relative to the value of the dollars, but you’re so sure about what you’re saying, you’ll happily bet your dollars to someone else’s doughnuts over the matter.