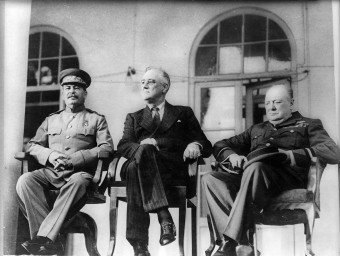 While Joseph Stalin’s cult of personality, subsequent statues, and certain photos and paintings may have you thinking he was a giant of a man, in truth the former Soviet leader and glorious moustache owner was only around 5 feet 5 inches tall (165 cm), give or take an inch.

While this is decidedly below average in many regions of the world for men today, in his own time, it wasn’t quite as much so, with the average height of men in Russia as Stalin ventured into adulthood only ringing in at just under 5 feet 8 inches (173 cm) tall. Despite only being a little below average, Stalin went to some rather extreme lengths to hide his true stature, as well as other less literal shortcomings, from the general public. 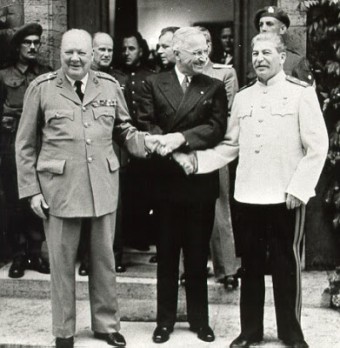 Stalin’s propensity to try to make himself appear taller was no doubt spurred on by comments such as the one United States President Harry Truman (who was approximately 5 feet 8 inches tall) made, referring to Stalin as “little squirt”. Likewise, Grigol Uratadze, a man who was imprisoned alongside Stalin during his time as a revolutionary, described him as unassuming with a “creeping way of walking, taking short steps…”, while Milovan Đilas, a former Yugoslavian politician mentioned that he was “small” with an “ungainly build” in a later book describing their encounters.

Along with his below average stature, Stalin’s left arm was shorter than his right with a slightly withered hand due to an injury he sustained at age 12 when he was hit by a horse and ultimately suffered severe blood poisoning. Although Stalin retained most of the use of his left arm throughout his life, it was noticeably more stiff and clumsy than his preferred appendage and he was reportedly unable to fully extend his elbow from that age onward. He mostly hid this injury by folding his hands over one another when taking photographs or by putting his left hand into his pocket.

On top of this, Stalin’s face was covered in pockmarks from a bout of near fatal smallpox he contracted at age 7, which he hid in later life with, among other methods, his gloriously maintained facial hair.

Despite all this, Stalin’s cult of personality painted a very different picture, as did the actual artists who painted him.  Presumably because of the fact that displeasing Stalin at the height of his power was a great way to find yourself no longer breathing (and possibly even erased from all records, see Bonus Facts below), most every “official” photo, painting and sculpture of the Father of Nations depicts him as being a man of gigantic size who towered over his subordinates.

Stalin also insisted that Mikheil Gelovani, an actor given Stalin’s personal blessing to portray him in films and other propaganda, not accept roles that would require him to portray “a mere mortal” because of how similar in appearance the two men were (though Gelovani was reportedly much taller).

To maintain this illusion in face-to-face meetings, Stalin also took to wearing boots with cleverly masked, significantly raised heels and would often pose for photos while standing on a raised platform or positioned well in front of or above those around him. Of course, few of Stalin’s subordinates would dare ever make fun of Stalin’s penchant for trying to look taller, and the propaganda machine continually depicting him as having “characteristics akin to those of a god,” according to Soviet leader Nikita Khrushchev, no doubt helped them rationalize Stalin’s need to maintain the image. However, the same cannot be said for the likes of President Truman and Winston Churchill who both found the lengths Stalin went to make himself appear taller amusing when they met with him. (And lest you think Truman was just trying to be insulting with the “little squirt” quip, he also had a lot of positive things to say about Stalin after their 1945 meeting, including writing in his diary on July 17th that “He [Stalin] is honest, but smart as hell.“)

Besides the high heels, platforms in photographs, and exaggerated stature in paintings, Stalin’s private residence in Sochi was specially constructed with his frame in mind and everything in it, from the chairs to the staircase were made slightly smaller than usual so that Stalin could use them perfectly comfortably and otherwise appear especially tall in stature. Even his pool was only a little over four feet deep at its maximum depth because he couldn’t swim (he did, however, enjoy taking little walks back and forth in it) and didn’t want to be submerged if he ventured into the deep end.

Other features of Stalin’s mansion, which you can still tour today, include a smaller than regulation size billiards table complete with a smaller than average, weighted cue the dictator used to make his shots more powerful. Not that he needed it because, once in power, Stalin reportedly never lost a single game of billiards against any of his guards… (And if that’s not just propaganda akin to Kim Jong Il’s claim that he shot 11 hole-in-ones his first time ever playing golf, it no doubt had something to do with the fact that Stalin could have any of his guards killed if they displeased him.)