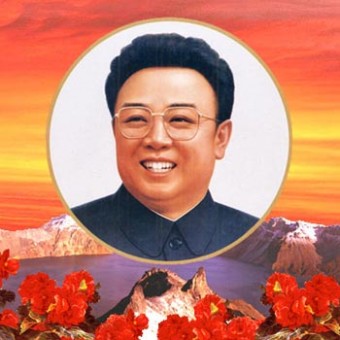 Kim Jong-Il was born Yuri Irsenovich Kim.  His official biography states that he was born on a sacred mountain (Baekdu Mountain, the legendary birthplace of Korea’s first kingdom) on February 16, 1942, where his father was serving in a secret military base, attempting to overthrow the Japanese.  Further, it states that his birth was marked by a double rainbow over the mountain, a new star appearing in the sky, and, before his birth, a swallow foretold his coming.

Besides the obvious parts of this that aren’t true, he also was not born on Baekdu Mountain in 1942, but rather was born in Vyatskoye, Khabaroskv in 1941.  Vyatskoye is a small hamlet in Russia.  Kim’s father, Kim Il-Sung, was actually a commander in the Soviet 88th Brigade there.  After WWII, Korea gained its independence from Japan and the family returned to Korea where his father began being groomed to rule by the Soviets, first being installed by Stalin as the head of the Provisional People’s Committee.  Shortly thereafter, he was made Prime Minister and eventually became President.