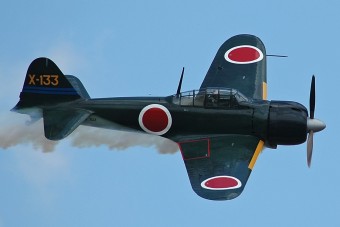 If you take a peek at a list of pilots who were considered flying aces during WW2, you’ll notice that the top of the list is dominated by Luftwaffe pilots, some of whom scored hundreds of aerial victories during the war. While their skill and prowess in the air is undeniable, it’s arguable that the finest display in aerial combat during WW2 was achieved, mostly by luck, by an American B-24 co-pilot when he scored a single enemy kill with nothing but a handgun, at about 4,000-5,000 feet (about 1.3 km) in altitude, and without a plane. This is the story of Owen Baggett.

Born in 1920 in Texas, after finishing high school, Baggett moved to the city of Abilene to enroll in Hardin–Simmons University. While we were unable to discern what Baggett studied from the sparse amount of information available about his early life, the fact that he went to work at Johnson and Company Investment Securities in New York after graduating suggests he studied finance, business, or another similar subject.

Whatever the case, while still working at the investment firm in New York in December of 1941, Baggett volunteered for the Army Air Corps and reported for basic pilot training at the New Columbus Army Flying School.

After graduating from basic training, Baggett reported for duty in India, just a stone’s throw away from Japanese occupied Burma with the Tenth Air Force. Baggett eventually became a co-pilot for a B-24 bomber in the 7th Bomb Group based in Pandaveswar and reached the rank of 2nd Lieutenant. During his time with the 7th Bomb Group, Baggett’s duties mainly consisted of flying bombing runs into Burma and helping defend allied supply routes between India and China.

Baggett’s career was mostly uneventful, or at least as uneventful as it could be given the circumstances, for around a year until he was called upon to take part in a bombing run on March 31, 1943. The mission itself was fairly simple- Baggett and the rest of the 7th Bomb Group were to fly into Burma and destroy a small, but vital railroad bridge near the logging town of Pyinmana.

However, shortly after taking off, the (unescorted) bombers of the 7th Bomb Group were attacked by a few dozen Japanese Zero fighters. During the ensuing dogfight, the plane’s emergency oxygen tanks were hit, severely damaging the craft. Ultimately, 1st Lt. Lloyd Jensen gave the order for the crew to bailout. Baggett relayed the order to the crew using hand signals (since their intercom had also been destroyed) and leapt from the aircraft with the rest of the surviving crew.

Not long after the crew bailed out, the attacking Japanese Zeros began training their guns on the now-defenceless crewman lazily floating towards the ground.

Baggett would later recall seeing some of his crewmates being torn to pieces by gunfire (in total 5 of the 9 aboard the downed bomber were killed). As for himself, a bullet grazed his arm, but he was otherwise fine. In a desperate bid to stay that way, after being shot in the arm, Baggett played possum, hanging limp in his parachute’s harness.

According to a 1996 article published in Air Force Magazine, this is when Baggett spotted an enemy pilot lazily flying along almost vertically in mid-air to come check out whether Baggett was dead or not, including having his canopy open to get a better look at Baggett. When the near-stalling plane came within range, Baggett ceased to play dead and pulled out his M1911 from its holster, aimed it at the pilot, and squeezed the trigger four times. The plane soon stalled out and Baggett didn’t notice what happened after, thinking little of the incident, being more concerned with the other fighters taking pot shots at he and his crew.

After safely reaching the ground, Baggett regrouped with Lt Jensen and one of the bomber’s surviving gunners. Shortly thereafter, all three were captured, at which point Baggett soon found himself being interrogated. After telling the events leading up to his capture to Major General Arimura, commander of the Southeast Asia POW camps, very oddly (as no one else in his little group was given the opportunity), Baggett was given the chance to die with honour by committing harakiri (an offer he refused).

Later, while still a POW, Baggett had a chance encounter with one Col. Harry Melton. Melton informed him that the plane that Baggett had shot at had crashed directly after stalling out near him and (supposedly) the pilot’s body had been thrown from the wreckage. When it was recovered, he appeared to have been killed, or at least seriously injured, via having been shot, at least according to Colonel Melton.

Despite the fact that the plane had crashed after his encounter with it, Baggett was still skeptical that one (or more) of his shots actually landed and figured something else must have happened to cause the crash. Nevertheless, it was speculated by his compatriots that this must have been the reason Baggett alone had been given the chance to die with honour by committing harakiri after being interrogated.

Baggett never really talked about his impressive feat after the fact, remaining skeptical that he’d scored such a lucky shot. He uneventfully served the rest of his time in the war as a POW, dropping from a hearty 180 pounds and change to just over 90 during the near two years he was kept prisoner. The camp he was in was finally liberated on September 7, 1945 by the OSS and he continued to serve in the military for several years after WW2, reaching the rank of colonel.

The full details of his lucky shot were only dug up in 1996 by John L Frisbee of Air Force Magazine. After combing the records looking to verify or disprove the tale, it turned out that while Col. Harry Melton’s assertion that the pilot in question had been found with a .45 caliber bullet wound could not be verified by any documented evidence, it was ultimately determined that Baggett must have managed to hit the pilot. You see, the plane in question appears to have stalled at approximately 4,000 to 5,000 feet (so an amazing amount of time for the pilot to have recovered from the stall had he been physically able) and, based on official mission reports by survivors, there were no Allied fighters in the vicinity to have downed the fighter and no references of anyone seeing any friendly fire at the slow moving plane before its ultimately demise. Further, even with some sort of random engine failure, the pilot should have still had some control of the plane, instead of reportedly more or less heading straight down and crashing after the stall.