Why People Stuck One Hand in Their Jackets in Old Photographs

October 1, 2015 Melissa
M. Kirkpatrick asks: Why did men used to stick one of their hands in their jackets in old photographs? 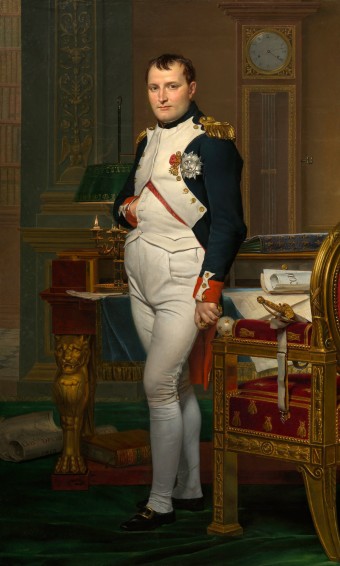 Conveying calm assurance, the practice of placing one hand inside of a top garment is ancient, dating back to before people even wore jackets, at least as we think of them.

In the 6th century B.C., it was considered rude in some Greek circles to speak with the hands outside of the clothing, especially when conducting matters of state. As Aeschines said in his famous speech Against Timarchus (346 B.C.):

And so decorous were those public men of old, Pericles [495-429 B.C.], Themistocles [524-459 B.C.], and Aristeides [530-468 B.C.] (who was called by a name most unlike that by which Timarchus here is called), that to speak with the arm outside the cloak, as we all do nowadays as a matter of course, was regarded then as an ill-mannered thing, and they carefully refrained from doing it. And I can point to a piece of evidence which seems to me very weighty and tangible. I am sure you have all sailed over to Salamis, and have seen the statue of Solon [638-558 B.C.] there. You can therefore yourselves bear witness that in the statue that is set up in the Salaminian market-place Solon stands with his arm inside his cloak. Now this is a reminiscence, fellow citizens, and an imitation of the posture of Solon, showing his customary bearing as he used to address the people of Athens.

By Aeschines’ time, however, the custom had fallen out of fashion and was (seemingly) not revived in the Western world again until around the 18th century.

In the early 1700s, portraitists like Jonathan Richardson (1667-1745) were beginning to apply painting theory to their realistic images. Identifying in his Essay on the Theory of Painting (1725) that the sitter’s general appearance (“air”) and body language (“attitude”) were the keys to an excellent portrait, Richardson and his contemporaries began looking to classical orators and the postures used in ancient statuary for their inspiration. Wishing to convey that the sitter was both of “good humor, and suitably elevated in character,”[1] the pose of “hand-in” was soon adopted. Ironically, it became so popular among the English ruling class because (they thought) it conveyed them “in a manner deemed agreeable and without affectation.”[2]

Godfry Kneller’s Self-Portrait (1710) was an early example of the fad, and soon the most well-known portraitists were employing the attitude. Richardson himself painted Horace Walpole (1734-35), while perhaps the most famous English portraitist, Thomas Gainsborough (1727-1788), had his “hand-in-pocket” for his Self-Portrait (1759). In fact, one fashionable portraitist, Thomas Hudson (1701-1779), used the gesture so frequently that people questioned whether or not he was even capable of painting hands.

Of course, perhaps the most famous portraits where “hand-in-waistcoat” is employed are of Napoleon Bonaporte (1769-1821), including Portrait of Napoleon Bonaparte, First Counsel (1804) by Jean-Auguste-Dominique Ingres (1780-1867), The Emperor Napoleon in His Study at the Tuileries (1812) by Jacques-Louis David (1748-1825), and the posthumous Bonaparte Crossing the Alps (1848-50) by Hippolyte Delaroche.

The practice fell out of favor by the end of the 19th century, for the most part, although it was still occasionally used in the 20th century, including by Joseph Stalin (1878-1953) in this photograph from 1948.