Why are Some People Allergic to Domestic Cats and Are They Also Allergic to Tigers and Other Big Cats?

January 4, 2016 Melissa
Jessica asks: Are people who are allergic to house cats allergic to tigers and other large cats? 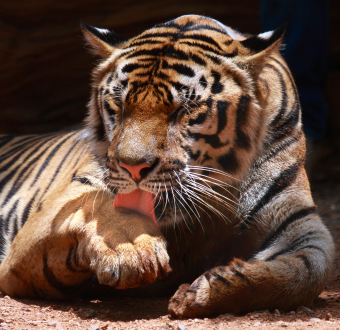 One of its most common behaviors greatly contributes to the domestic cat’s propensity to stimulate an allergic response in some humans – its grooming. When the cat licks itself, it stimulates both its salivary glands as well as sebaceous glands in its skin, all of which produce a protein known as Fel d 1. Another common allergen is Fel d 4, which is primarily expressed via the cat’s saliva.  While there are other potential allergens, these two are the primary things that cause an allergic reaction in some humans. (It should also be noted that female cats produce less of these allergens than their male counterparts owing to testosterone increasing production of the offending proteins.)

For those who are allergic, when sufficient Fel d 1 or Fel d 4 are present (and for some it takes relatively little), their own immune cells react, secreting the antibodies (immunoglobulin or Ig) IgE and IgG. Most pertinently, the former results in the release of histamine (that causes swelling, flushing, runny nose, watery eyes and hives). Ultimately the antibodies bind to the offending Fel d 1 or Fel d 4, tagging them for elimination. Properly identified, this impels the immune cells to make more B cells in preparation for an invasion, and to also flock to the area of infestation.

Now that we know what causes cat allergies in humans, does the same allergic reaction occur when said humans are exposed to “big” cats as opposed to the domestic variety?

Outside of anecdotal accounts from zoo keepers and other such individuals (which indicate the answer is yes in the few accounts that I found, though they did not give much in the way of specifics in terms of relative reaction or whether this was always true), I could only find one scientific study that investigated whether big cats also have Fel d 1 and/or cause the same type of allergic reaction: Evidence for a Fel d I-like molecule in the big cats.

In the study, the researchers focused on reactions to exposure to the hair of a variety of Felidae (ocelot, puma, serval, Siberian tiger, lion, jaguar, snow leopard and caracal). They did so via examining blood samples from 11 patients strongly allergic to domestic cats (along with five patients allergic to mites, five non-allergic people and four zoo employees who worked with big cats). While a very limited sample-size, the team found that the domestic cat-allergic patients all reacted much more strongly to plain Fel d 1, cat dander or cat serum, than they did to the big cats’ hair. However, most of the domestic-cat allergic people did react, at least a little, to the big cats’ hair, including the Siberian tiger, lion and snow leopard.

So, at least with the limited data we have available so far, if you are allergic to domestic cats, it would seem you can expect to suffer lesser allergic reactions when encountering various big cats. Of course, depending on the scenario in which you find yourself face to face with, say, a lion or tiger, you’ll likely have other physiological reactions which are drastically stronger than when encountering a domestic cat, resulting from your body’s desire to not become another animal’s food.