Only 15 paintings by the Italian Renaissance master Leonardo da Vinci are known to exist. But what if there were more…and what if Leonardo’s greatest work—one that’s been presumed destroyed since 1563—was safely hidden, just waiting to be discovered? 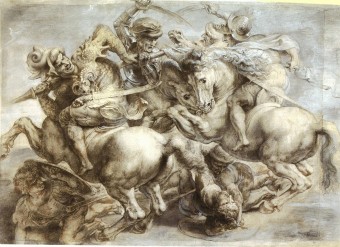 In 1503 the Republic of Florence (now part of Italy) commissioned Leonardo da Vinci to paint a mural in the Palazzo Vecchio (“Old Palace”), which housed the city-state’s government. The mural was to be painted on a wall of the palace’s Hall of the Five Hundred, the room where the city’s 500-member grand council conducted its affairs. The city fathers wanted scenes of Florence’s military triumphing over its enemies, so Leonardo painted the Battle of Anghiari, in which Florence and its allies defeated Milan in June 1440.

Typically, murals on walls were painted using the fresco technique: dry pigments were mixed with water and brushed into wet plaster as the wall was being built. Frescoes can be spectacular, but they come at a cost: the artist must paint quickly, before the plaster dries, and he cannot revise his work because once the pigments have soaked into the plaster, they can’t be removed or painted over. And the choice of colors is limited, because lime contained in the plaster bleaches many types of pigments. Only pigments that are resistant to chemical bleaching can be used.

Leonardo didn’t want these restrictions, so he decided to experiment with a new and untested technique of mural painting. He used oil paints, which are normally used on canvas, and got them to stick to the wall by treating the plaster surface with a preparation containing some kind of waxy substance, probably beeswax.

The oil paints went on well enough, but they didn’t dry quickly enough to prevent dripping (perhaps because Leonardo used too much wax), so he brought in braziers (charcoal stoves) to get the paint to dry more quickly. Bad idea: instead of drying the paint, the heat melted the wax, causing even more damage. Leonardo was so discouraged that he abandoned the project entirely. Instead of getting a battle scene playing out across the entire expanse of wall, all the city fathers got for their money was the centerpiece: a 15-by-20-foot depiction of a few soldiers on horseback fighting over a battle flag, and a few others battling it out on foot.

For all its flaws, the drippy, melted, and unfinished painting was a sight to behold, thanks to Leonardo’s obsession with presenting human and animal anatomy as accurately as possible. Over the course of his lifetime, Leonardo dissected more than 30 executed criminals and medical cadavers, plus countless frogs, pigs, dogs, cows, horses, bears, and other animals. When he performed his dissections, he took exhaustive notes and made minutely detailed sketches of what his scalpel revealed so that he could use them in his art. His sketches of the human body are considered among the first medically accurate drawings ever made.

All this attention to detail paid off: many Renaissance artists considered The Battle of Anghiari Leonardo’s finest painting, quite a compliment considering that he also painted The Last Supper and the Mona Lisa. For decades afterward, people made special trips to the Palazzo Vecchio just to look at the mural, both to study the poses of the soldiers and the expressions on their faces, and especially to look at the horses. The startling realism of the giant creatures was so inspiring to other artists that many of them made copies of the scene, no doubt hoping that some of Leonardo’s genius would rub off. The most famous copy—actually believed to be a copy of a copy—is a drawing made by the Flemish painter Peter Paul Rubens in 1603. Today it hangs in the Louvre.

It’s a good thing that Rubens and others made copies, because they may be the only surviving record of what Leonardo’s version looked like. When the Hall of the Five Hundred was enlarged and remodeled in 1563 by an architect and painter named Giorgio Vasari, the walls were painted with new battle scenes, this time with frescoes painted by Vasari. In the process, every trace of Leonardo’s masterpiece vanished. No record of what happened to The Battle of Anghiari survives—for that matter, no one even knows for certain on which wall it was painted. It was assumed that the painting was destroyed during the renovations.

In the late 1960s, an Italian art historian and da Vinci expert named Carlo Pedretti proposed a different theory: maybe The Battle of Anghiari was still intact and still in the Hall of the Five Hundred, only covered up (and, hopefully, preserved) during the renovations of 1563. In his 1968 book The Unpublished Leonardo, Pedretti cites the examples of two churches and one courtroom in Florence that Vasari was hired to renovate in the 1500s. In all three cases, rather than destroy the existing artwork, Vasari protected existing frescoes by building new walls just an inch or so in front of the old ones. He likely made no secret of what he was doing, but he apparently made no record of it either, and over the centuries, all knowledge of the inner walls and the artwork they still concealed was forgotten. The frescoes remained safely hidden away for hundreds of years until they were rediscovered during new renovations in the 1800s.

Was it possible that Vasari had done the same thing with The Battle of Anghiari? Pedretti thought so. In the mid-1970s he conducted a study of the Hall of the Five Hundred. Based on historical evidence and a thorough physical examination of the hall, he concluded that The Battle of Anghiari had been painted on the east wall of the room, where a Vasari fresco commemorating the Battle of Marciano of 1554 is today.

It was during that same survey of the hall that an assistant of Pedretti’s named Maurizio Seracini noticed something unusual: near the top of the Battle of Marciano fresco, some 40 feet up, where no one at ground level would ever see it, the words cerca trova (“seek, and you shall find”) are painted in tiny, faint lettering on a small green battle flag. These are the only words painted on any of the Vasari frescoes in the Hall of the Five Hundred.

Seracini believes the words are a message from Vasari: that the Leonardo painting is behind the Battle of Marciano fresco, right where Pedretti theorized it would be. But neither of the men could do much about it in the 1970s because the Vasari frescoes are themselves Renaissance masterpieces, and at the time, there was no technology available that would have allowed them to look behind the Vasari without damaging it. In 1977 their work came to a halt.

By the year 2000, new technologies such as laser scanning, thermal imaging, and ground-penetrating radar (and computers powerful enough to process the resulting data) made it possible for Seracini to resume the search. It was suddenly possible for him to see where doors and windows had been bricked up during the 1563 renovation and the original height of the ceiling before it was raised. In 2002 something even more significant was discovered: the existence of a half-inch air gap behind the east wall, and the presence of another, older wall right behind it—just as Pedretti had predicted there would be.

Once again, Seracini bumped up against the limits of technology. His devices enabled him to detect the presence of the hidden wall, but there was no way for him to tell what, if anything, was painted on it. It wasn’t until 2005, when some physicists at a scientific conference told him that it should be possible to build a “gun” that shoots gamma rays (similar to X-rays) onto the hidden wall without damaging either Vasari’s fresco or Leonardo’s mural, if it really is painted on the wall beneath. The subatomic particles that bounce back, called neutrons, could then be analyzed for signatures of specific paints and pigments that Leonardo is known to have used. Bonus: the gamma ray gun offered the possibility of even producing an image of any artwork painted on the inner wall.

But there was a catch: no such gun existed as yet, and it was estimated that developing one was going to cost more than $2 million, money that Seracini did not have and was unable to raise. Even worse, though the gamma ray technology was demonstrably safe and harmless to both paintings and humans, shooting a ray gun at a Renaissance masterpiece certainly didn’t sound harmless, and the Florence authorities balked at the idea.

HOLE IN THE WALL

Having exhausted all noninvasive technology options, in 2011 Seracini decided to use minimally invasive techniques instead. Working with restorationists who were repairing damage to the Vasari fresco, he sought permission to drill tiny holes into areas of the fresco where no original paint remains, thereby sparing the work from damage. The holes would be barely a tenth of an inch in diameter, just large enough for a medical device called an endoscope to be poked through the holes to see what’s painted on the inner wall.

Seracini wanted permission to drill 14 holes but only received permission to drill seven. In the end, he only drilled six. None of the holes were located in areas that he felt offered the most promise, and only two even made it into the air gap between the two walls. Of these two, only one produced any evidence at all, but the evidence was compelling nonetheless: tiny samples of paint taken from the inner wall showed evidence of two pigments, one brown and one black, that Leonardo is known to have used in his painting. When compared with similar pigment used by Leonardo to paint both the Mona Lisa and a painting of St. John the Baptist, the sample of black pigment was found to contain the same proportions of iron and manganese oxide.

And that’s where the hunt for the lost Leonardo stands today. Drilling holes into the Vasari fresco, even into cracks and other places where there isn’t any original paint remaining, proved so controversial that the hunt for the lost Leonardo was suspended in September 2012, perhaps for good. Unless Seracini comes up with the money for the gamma ray gun and gets permission to use it, that may be as close as we ever get to finding out if the painting really is where he thinks it is. More than 30 years into the search, he isn’t giving up: “I still have the same passion. I don’t want to quit now,” he says. “I’m so close.”