Why Do Many Countries’ Names End in “-stan,” and Home Country Designations Often End with “–an” as in “American”?

December 1, 2015 Melissa
Chris G. asks: Why are there so many countries that have a name that ends in stan? I was also wondering why we call people from many countries the name of their country ended with an, like Canada and Canadian? 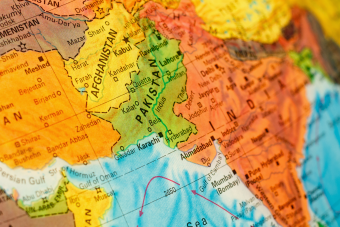 Denoting that it is a piece of the earth associated with a particular group of people, the suffix -stan simply means “land of.”

An ancient suffix of Persian origins, for many people, particularly in Central Asia, the addition of –stan to the name of their cultural or ethnic group identifies that a certain place belongs to them, e.g., Kazakhstan is the “land of the Kazakhs.”

-Stan‘s roots go even further back than Persia, however, to the Indo-Iranian element, *stanam, which meant both “place” or even more literally, “where one stands.” This old construction is derived from the even earlier Proto-Indo-European root *sta, which also meant “to stand.”

The use of a suffix to denote “land of” is not unique to -stan, however. In English, we often use –land to identify a nation or place, and familiar words include England, Finland, Greenland, Iceland, Ireland, Netherlands, New Zealand, Poland, and Thailand, as well as Maryland and Newfoundland. Other languages use the convention as well, such as the German Deutschland.

Adding –an at the end of country or place names to identify a person’s heritage or ethnicity also traces its origins back to ancient times, and the Proto-Indo-European root *-no-, which meant “pertaining to.” More recently (but still relatively ancient), in Latin this element gave rise to –anus, as in Rōma ‎(“Rome”) → Rōmānus ‎(“Roman”). Over the years this has in turn morphed into our current ending –an, as in American, Mexican and Romanian. Not exclusive to regional references, we also see this nomenclature in many other words like Christus ‎(“Christ”) → christiānus ‎(“christian”).

In addition, in English, this –an is often modified with the addition of an “i,” such as in the aforementioned Romanian and christian, as well as in things like Brazilian, Canadian and Parisian.

And if you’re wondering, the suffix –ish, as in British, comes from the Proto-Germanic suffix *-iska which meant “of the nativity or country of.” It morphed into the Old English –isc before becoming the modern English, Irish, Spanish, etc.