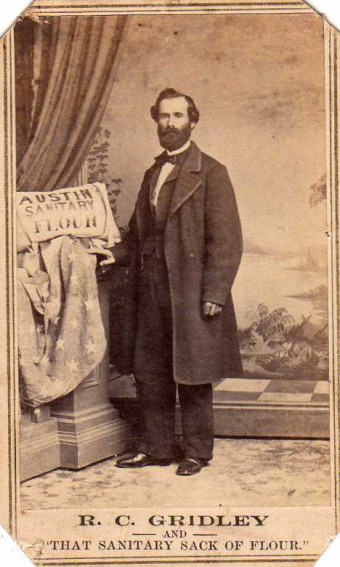 Reuel Colt Gridley was born and raised in Hannibal, Missouri in 1829, and lived there contemporaneously with Samuel Clemens (aka Mark Twain), with Clemens claiming Gridley was a schoolmate of his.

Leaving Missouri for greater adventure out west as a teenager, Gridley served in the Mexican War (1846-1848) and later joined the great California Gold Rush in 1852. (See: What Sparked the California Gold Rush?) He soon left mining and experimented with a few professions, including banking and mail delivery, before following another mine strike to Austin, Nevada where he established a general store.

Easy-going and good-looking, Gridley was successful as a shopkeeper and popular in town. In 1864, he ran for mayor of Austin as the Democratic candidate and struck up a friendly wager with the Republican candidate, Dr. H.S. Herrick: whoever lost the race would have to carry a 50-pound sack of flour for more than a mile while a marching band played a tune of the other’s choice. (If Gridley had won, Dr. Herrick would have marched to Dixie).

Gridley lost, and so, carrying the 50-pound flour sack decorated with red, white and blue ribbons and accompanied by his teenage son (who was carrying an American flag) and a marching band, Gridley marched from Austin to Clinton while the band played John Brown’s Body.

Attracting a fair bit of attention, a good crowd had gathered at the saloon where the two opponents ended the day after the procession was over. As neither Mayor Herrick nor Gridley wanted the flour, it was suggested that they auction it off and send the proceeds to the U.S. Sanitary Commission, an organization established by a New York minister to aid wounded Union soldiers.

Samuel Clemens was also in Nevada at that time, in the neighboring town of Virginia City. As he wrote in 1872’s Roughing It, Nevada’s residents in the 1860s were flush from the proceeds of their great silver mines, and accordingly had more money than they knew what to do with.

In that environment, the flour sack was auctioned off with the winning millman bidding $250. According to Samuel Clemens, when the millman was asked where he’d like the flour delivered, he stated, “Nowhere- sell it again!”

Getting into the spirit of things, miner after miner lined up to bid on it, and each time it was sold, following the millman’s example, it was re-donated, such that by the end of the day, $5,000 (about $75,000 today) had been collected in Austin.

The story of the flour bag auction spread and other towns requested that Gridley come, with Virginia City being the first to send him a telegram stating, “Fetch along your flour sack!”  Realizing he was on to something, Gridley did indeed hit the road.

However, in Virginia City, initially the auction brought in less than had been seen in Austin. To rectify this and restore their town’s pride, a second auction was held. Clemens noted,

Till late in the night the principal citizens were at work arranging the morrow’s campaign, and when they went to bed they had no fears for the result. At eleven the next morning a procession of open carriages, attend by clamorous bands of music adorned with a moving display of flags filed along C street and was soon in danger of blockade by a huzzahing multitude of citizens…

After this successful auction, Gridley traveled to other wealthy mining areas, and then throughout California (including Sacramento and San Francisco). Exhausting the West, he traveled east and continued to sell the flour sack for charity, ultimately stopping the campaign in St. Louis, where the flour was used to bake little cakes that sold for $1 each (the proceeds of which also went to the Commission).

Sadly, Gridley spent his entire life savings financing the 15,000 mile charitable campaign. To make matters worse, shortly after he returned to Austin, the silver boom ended ultimately killing his General store. Suffering from a rheumatic condition, he moved to Stockton, California where his sister lived in 1868. He died two years later in 1870 at the age of 41.