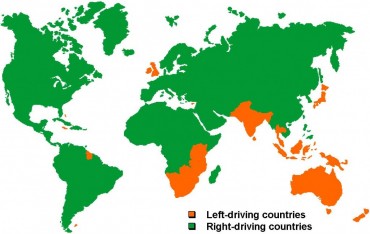 The origin of this varies based on the time period and country, but primarily throughout history people used the “keep-left” rule.  It has only been very recently that the world has predominately switched to the “keep-right” rule.

The first real archaeological evidence of a keep-left or keep-right type rule for a road, originates in the Roman Empire, which shouldn’t be surprising as they built a lot of massive, well trafficked roads spanning Europe and thus would have needed to establish certain rules governing how people were to interact on the roads.   So which side did the Romans use?  Archaeological evidence suggests it was common for the Romans to drive on the left side of the road.  This was first discovered in 1998 where a Roman quarry in Swindon, England had grooves in the road going away from the quarry on the left side that were significantly deeper than those on the right, due to the added weight of the stone.   It is not precisely known why they would have chosen this side, but it is probably similar to one of the main reasons this practice continued into the middle ages.

During the middle ages the roads weren’t always very safe for travelers; meeting people coming the other way on the road was something best done defensively.  Historians then believe the keep-left rule was adopted because, on a horse, if you were right handed and you met some unsavory company on the road, you could draw your weapon, typically attached to your left side, with your right hand and bring it to bear quickly against the person who is going the opposite way of you on your right; all the while, controlling the reigns with your left hand.  Then of course, if you happened to meet a friend on the road, you could more easily offer your right hand in greeting without needing to reach across your body when on horseback.  People on horseback then also typically ruled the road, so everybody else followed suit.

This keep-left rule was so common that, in 1300 AD, Pope Boniface VIII decreed that all pilgrims headed to Rome from wherever they were coming from should abide by the keep-left rule of the road along their journey.  This then held across most of the Western World until the late 1700s.

What ended up happening to force the switch in the 18th century were teamsters in the United States, who would drive large wagons with a team of horses, as the name implies.  These wagons tended to dominate the road and force everybody else to abide by the rule of the road they were using.  Very importantly, in many of those old, large American wagons, they did not include a seat on the wagon for the driver.  Rather, the driver would typically sit on the rear left most horse, when the driver was right handed.  This allowed them to easily drive a whole team of horses with a lash in their right hand.

This then forced the issue of having oncoming traffic on your left as the drivers would want to make sure any part of their team or wagon didn’t collide with oncoming traffic.  When sitting on the rear left most horse, this was much easier to do when using a keep-right rule of the road.  Just as important, if you wanted to pass a wagon in front of you, or at least see further down the road when you are sitting on the left side, it is much easier done if you are using the keep-right rule; this would give you much greater visibility of oncoming traffic when sitting on the left of your wagon.  Gradually, this system spread so that by the late 18th century, the first laws in the United States were passed, starting in 1792 in Pennsylvania, where the rule of the road was now officially a keep-right rule.  This quickly spread throughout the United States and Canada.

So how did this spread through Europe?  It started with France.  The reasons why the French switched to a keep-right rule instead of the traditional keep-left rule aren’t completely clear.  Some say it is because the French Revolutionists didn’t want anything to do with anything that had ever been Pope decreed.  Others say it was because they didn’t want to use the same rule of the road the English used.  Still others say it was entirely Napoleon’s doing.  The reasons why he may have done this, if that is the case, are even murkier ground.  Whatever the case, France switched to the keep-right system.  Napoleon then spread this system throughout the countries he conquered.  Even after he was defeated, most of the countries he had conquered chose to continue with the keep-right system.  The most important of these countries, as far as eventually further spreading the keep right system, was Germany.  Fast forward to the 20th century and, as Germany conquered countries in Europe, they forced their keep-right system onto those countries.

England never adopted this method primarily because massive wagons, as became common in the United States, didn’t work well on narrow streets which were common in London and other English cities.  England was also never conquered by Napoleon or later Germany.  Thus, they kept the classical keep-left rule of the road that had endured for hundreds of years before.   By 1756, this was actually made an official law in Britain.  As the British Empire expanded, this keep-left rule, as a law, spread throughout the world.  This hasn’t endured in most of the former British ruled countries, primarily thanks to Germany and the growing popularity of the keep-right system.  There are still a few though, probably the largest of which, by population, is India.