August 6, 2014 Karl Smallwood
Guy C. asks: I live in America and was just wondering how far below and above my land do I own? 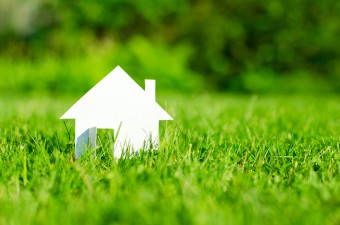 On paper, the concept of land ownership sounds very simple- you pay money and in return you’re given unfettered access to a predetermined amount of land. But how much of that land do you actually own? Do you own the sky above it? How about the land below it? What about all the animals that may live there; do you own those too?  All of these questions and more define what exactly it means to “own” a piece of land.  Surprisingly, many of the answers aren’t well defined from a legal standpoint as you’ll soon see.

(Note: The laws governing one’s rights as a landowner vary considerably depending on location, even within a given country or state.  With that caveat noted, we’ll endeavor to answer the above questions and a couple more in the general case for places like the United States and the UK.)

First of all, let’s deal with how much of the air above your property you own since that particular question has been one of the more common queries about owning or buying land we’ve received here at Today I Found Out over the years. Historically speaking, if you owned a piece of land, you owned everything both above and below the soil from the deepest reaches of the Earth right up to the heavens themselves, giving you a near infinite amount of property in the universe with your property ever changing as the Earth rotates and the various celestial bodies move around.

A popular maxim in regards to this concept is, “Cuius est solum, eius est usque ad coelum et ad inferos” which basically translates to: “whoever owns the soil, holds title all the way up to the heavens and down to the depths of hell“.

Within the legal world, this maxim is described as “the traditional starting point of property law” and it is considered to have been instrumental in shaping what we understand as property law today. Curiously, despite its ancient sounding nature, the specific maxim can only be traced as far back as the 13th century and it is largely believed to have been the brainchild of Italian scholar, Accursius. It’s commonly assumed that the maxim made its way into English and subsequently American law thanks to Accurius’ son, who was invited to England to teach law at the request of the then King, Edward I.

Its first use in court is attributed to the case of Bury V Pope in 1587, during which the maxim was cited as justification for a large structure being erected that blocked out the natural light to another property owner’s home. Since back in those days there was no such thing as the “right to light” (essentially the right to not have the flow of natural light to your home impeded), it was decided that the building of the structure was entirely legal, since the owner of the land owned all of the air above his land too.

Today, the maxim is still used as a guideline. However, as a property owner you only really have the right to the airspace above your land located in the lower stratum, the precise boundaries of which are not explicitly labelled. In the end, you are supposed to be entitled to enough airspace to reasonably enjoy the land below that air. However, exactly what this means is up for debate. For example, you can’t ask commercial planes to stop flying over your house, because the sky is considered to be a public highway.  You could potentially, however, prosecute an overzealous news helicopter for hovering over your house if it was impeding your enjoyment of the land. Again, this would vary on a case-by-case basis but there have been instances of people being fined for trespassing for flying over someone’s land; so it’s not unheard of in US or British law.

The most famous case of this kind comes from 1945 when a chicken farmer named Thomas Lee Causby sued the US government for flying approximately 83 feet above his property, the noise of which caused a bunch of Causby’s chicken’s to accidentally kill themselves by running into walls. Causby won his case and the courts agreed that although a property owner wasn’t entitled to own all of the air above their land, they were entitled to enough so that planes flying overhead wouldn’t kill their chickens. Progress!

Today in the UK thanks to the Civil Aviation Act of 1982, the generally accepted amount of air above one’s roof a person is entitled to is approximately 500-1,000 feet, though again this isn’t a hard definition.  Likewise, the United States has a similar estimation of about 500 feet, though this has never been officially ruled on by the Supreme Court.

In both cases, this may be soon changing with the widespread introduction of drones, both personal, commercial, and those owned by the respective governments.  As such, the U.S. federal government particularly has recently been looking into significantly lowering the airspace “public highway” floor to accommodate this type of aircraft.

With that out of the way, what about the earth below your land? Well, again, this varies because owning land doesn’t necessarily mean you own the mineral rights to it. In a nutshell, the owner of the respective mineral rights to a piece of land is entitled to those substances that could potentially be sitting below a given property and it’s not uncommon for them to be sold separately to land and property rights. And there have been cases in the past of home-owners finding out that there is a huge deposit of gas under their home that they don’t have rights to, and have no right to stop the owner of the mineral rights drilling for.  Beyond the loss of money from that gas if you didn’t own the mineral rights, this can sometimes kill any property value your land may have previously had.

However, if you own both the land and all the mineral rights to a property and you live in the US, everything below the ground belongs to you, unless you happen to stumble on an Indian burial ground or something, in which case you have to report it.

Other than that, practically everything is fair game, you can drill for oil and gas or even mine, assuming you have the relevant permits, and anything you find is yours to sell or keep. However, if something below the ground of your property extends to the property of someone else, like a pool of oil or vein of gold, they have an equal claim to the portion of the material on their side of property line. This can get messy very quickly since determining exact boundaries underground is difficult and costly, unless you live in the UK, in which case, the Crown has first dibs on all coal, oil, silver, gas and gold found on public or private property.

It should also be noted that in the United States, thanks to compulsory integration, gas companies potentially have the right to drill under your land from an adjacent property if they have leased or been deeded a certain percentage of land surrounding your land, with this percentage varying from state to state.

As for how much of the land below your property you own, there’s no real limit enforced by courts and there have been cases of people being prosecuted for trespassing on other people’s property for digging even in the thousands of feet below the ground in the search for oil. Of course, in reality there is a practical limit in that if there is a country on the other side of the world from your land, it’s probably not one where your country has jurisdiction.  Further, there is the matter of the giant layer of magma inbetween.  But beyond that, you can generally dig away to your heart’s content as long as you’re not breaking any environmental laws and have the appropriate permits.

If you happen to live next to water, your rights again, vary greatly depending on the exact situation and it’s covered by a totally different set of laws and rules called, riparian rights. If you have a stream or the like running through your land, in Britain you’re entitled to fish while they’re in the water on your land, but you can’t do anything that would impede the flow of water to other people’s land since all running water eventually flows into the public ocean. Likewise, if navigable water flows across, through or otherwise near your property, you’re not allowed to do anything that would upset its natural course since the ground beneath all navigable water is owned by the state, so the public can use it freely.

If your property borders a large body of water, on the other hand, in general you have the right to access the water and if you so wish, construct a pier or wharf. However, you have no right to stop people using the water for navigational purposes and your rights to the land beneath the water, if any, only extends to a reasonable level of depth which has never been precisely defined.  If you happen to own a chunk of non-navigable water, that’s generally yours to do with as you please (barring breaking any environmental laws).

As for animals, you cannot claim ownership of any wild animals on your land; you are, however, allowed to hunt them if they’re not endangered. Trees, plants and fruit, on the other hand, are yours to do with as you please as long as the plant was originally planted or seeded on your land.

If your neighbour owns any plants or trees that overhang onto, or the roots spread out under, your property, you’re within your rights to trim them back (even the roots) as long as doing so wouldn’t kill the plant. However, the original owner still has the rights to any cuttings and can request that they be returned after you’ve cut them off. The same can be said for any fruit that happens to grow on the tree. So, technically, taking fruit from such a branch hanging on your property is theft.

However, any leaves that fall off of the tree are your problem to deal with, unless they cause damage to your property (for example by blocking up your gutters, or in the case of roots, growing into your septic drainage field or damaging your house foundation) in which case, you can ask your neighbour to pay for the damage and if they refuse, you can sue and will likely win.

In short, if you own a piece of land, you may own more than you’d expect, but in a lot of cases, perhaps less of it than you might wish.