What Function Does Natural Aspirin Serve in Plants?

October 9, 2015 Melissa
Blain F. asks: What function does natural aspirin serve in the plants that produce it? 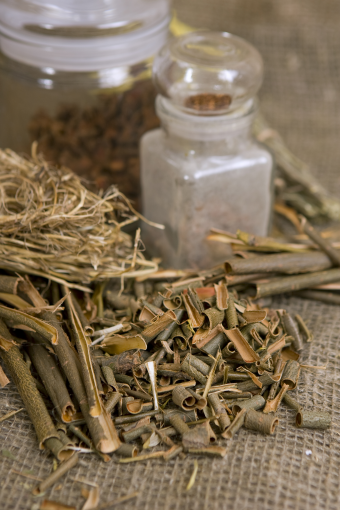 Salicylic acid is found in varying degrees in a wide range of plants including potatoes, tobacco, unripe fruits (including blackberries and blueberries, cantaloupe, kiwi, green pepper, tomato and olives), mushrooms, and, of course, willow.

A phenolic compound, together with cytokinins, auxins, gibberellins, ethylene and abscisic acid, salicylic acid plays a role in plant growth and development, photosynthesis and nitrogen metabolism, albeit these processes are not well-understood.

The compound also helps plants deal with environmental stresses such as extreme or sudden cold, drought, salinity, poor diet, heat and even heavy metals. This is done, at least in part, by the salicylic acid inducing different gene expressions within the plant; for example, in times of high temperatures, salicylic acid in some plants will induce gene expressions necessary to encode chaperone, a heat shock protein.

Salicylic acid is also key to some plants’ resistance to pathogens. When attacked by a microbe, the salicylic acid levels in these plants’ infected areas increase and help mediate the accumulation of pathogenesis related proteins that help the plant fight the invader.

Effective therapy for people as well as plants, humans have harvested salicylic acid from willow bark since ancient times, when the Babylonians, Chinese and Assyrians all used it for medicinal purposes. In fact, the “father of medicine,” Hippocrates (460-375 BC), even prescribed it for pain and to relieve fever.

Salicylic acid was first isolated by Edward Stone in 1763. Nearly one-hundred years later, Charles Frederic Gerhardt was the first to turn it into aspirin, aka acetylsalicylic acid, when he mixed sodium salicylate (a salt of salicylic acid) and acetyl chloride.

Bayer chemists produced their own synthesized version of it in 1897. Designed to be less upsetting to the stomach than salicylic acid, it was derived from Spiraea a ulmaria and called salicin. This designer acetylsalicylic acid was named Aspirin by Bayer after the plant’s name, as well as spirsäure, and old German word for salicylic aspirin.