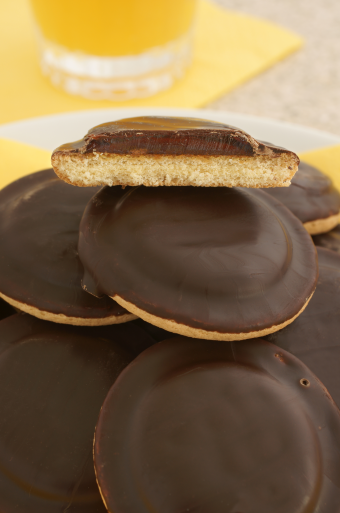 For anyone reading this who happens to be from the UK, you’re more than likely already well aware of what a Jaffa Cake is. For our readers that haven’t had the pleasure of sampling one of the greatest comfort foods ever created, they’re little, spongy, chocolate coated disks that contain a small amount of orange flavoured jam- they’re delicious. Oh, and they were also once at the centre of one of the fiercest court battles of the 1990s, with the lengthy and expensive case determining one, and only one, thing- whether or not the Jaffa Cake is a cake or a biscuit. Yep…

Before getting to that, for the sake of those unfamiliar, we first have to discuss the thrilling and exciting to read about world of European Tax Law and Value-Added Tax. In a nutshell, Value-Added Tax (commonly shortened to VAT) is described as being a: “A type of consumption tax that is placed on a product whenever value is added at a stage of production and at final sale.”

In essence, VAT is a tax that is paid by everyone involved with the manufacture of a given object or foodstuff and the consumer. For example, if a company in the UK wanted to make socks, they’d be charged VAT on the price of the raw materials used to make them. When that company sold the socks onto a retailer, the retailer would similarly be charged VAT on that sale. Finally, when the retailer sells the socks to a consumer, the consumer will pay VAT on top of the price charged by the retailer.

At the time of the publishing of this article, the VAT rate in the UK is 20% for, to quote the official website of the British Government, “most goods and services“. Because the government isn’t a cartoonishly evil entity run by men in suits gleefully rubbing their hands together at the thought of charging people through the nose for everyday essentials (are are they!?!?! ;-)), a number of things are subjected to a reduced rate of VAT (currently 5%) while some are exempt from the tax altogether.

Goods and services subjected to the reduced rate of VAT include things like mobility aids (like walking canes and those awesome scooters) and sanitary products (think tampons, panty liners and other things that make certain men wary of looking in a woman’s purse). As for things that are exempt from the tax entirely, that is mostly limited to goods and services that are considered essential or otherwise unfair to try and tax citizens for using, things like stamps, burials and end of life care, and most food.

In regards to that last item, while most food, and by extension animal feed, is exempt from VAT, certain so-called “luxury items” are taxed at the normal rate. Such luxury items include alcohol, mineral water, confectioneries and, rather unusually, biscuits that are covered with chocolate (regular biscuits are exempt).

This led to an embittered court battle between the British Government and McVities in 1991 when British Customs and Excise decided that Jaffa Cakes should be reclassified as chocolate covered biscuits and hence be liable to the standard rate of VAT. Jaffa Cakes had previously been considered to be cakes by Customs and Excise, something that is exempt from the tax.

As such, one of the largest manufacturers of Jaffa Cakes, McVities, challenged this decision and took it all the way to the highest court in the land.

According to the official website for Her Majesty’s Revenue and Customs, the decision of the courts hinged on being able to clarify exactly what made a cake a cake and a biscuit a biscuit, and arguing whether or not Jaffa Cakes conformed more to one definition or the other.

Towards this end, the main arguments on behalf of Customs and Excise were that Jaffa Cakes are usually sold along side biscuits, are roughly biscuit shaped and often consumed in place of them- adding that McVities themselves markets the product more like a biscuit than a cake.

McVities countered by stating that Jaffa Cakes were produced in a manner almost identical to that of a traditional sponge cake and they contained the same base ingredients (flour, eggs and sugar). McVities’ trump card, however, was pointing out that cakes and biscuits go stale in almost opposite ways, with cakes turning hard as they stale and biscuits turning soft.

To illustrate this point, McVities left a bunch of Jaffa Cakes out in the open and later presented them to the court, proving that, like cakes, they hardened as they went stale. According to the BBC, to really seal the deal, McVities baked a gigantic, 12-inch version of the Jaffa Cake and brought it to court to show off how similar it is to a cake when blown up to normal cake-sized.

For anyone wondering why the courts didn’t just take into account the fact that they’re called Jaffa Cakes, the judge presiding over the case, Mr D.C Potter, was asked to consider this and ruled it to be of “no serious relevance” because a product’s name often has little to do with its actual function.

In the end, the court decided the Jaffa Cake was, in fact, a cake, and McVities was allowed to continue selling the product without being subject to VAT.