The Weird World of the Octopus 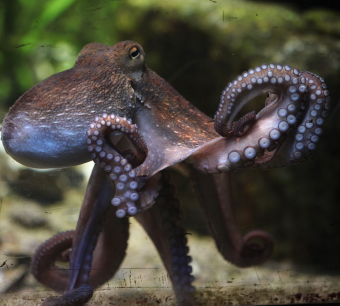 There are 289 different species in the Octopoda order, each of them just as strange as the last. With eight (or so) wriggly appendages, a bulbous mantle, homicidal tendencies and high intelligence, even a mid-sized octopus can be intimidating. And the more you get to know about them, the more you realize just how extraordinary these cephalopods are.

Their best known features, the eight arms (although at least one species, Haliphron atlanticus, has only seven) serve differentiated functions; for example, recent scholarship has shown that the two hind appendages work as legs when scuttling across the ocean floor, while the remaining six are used to help propel it along. In addition, although studies have shown that octopuses are ambidextrous, they also apparently favor certain arms, and many rely on the third arm from the front when eating.

In addition, nearly two-thirds of an octopus’ neurons are found in their arms; as such, these appendages, in a sense, have a mind of their own, enabling an octopus to solve a knotty problem with one arm (like how to open a clam shell), while the rest of the beast is looking for further prey. In fact, even after severed, an octopus’ arm will continue to react to stimuli. Nonetheless, as the higher motor centers of the octopus reside in its brain, the octopus’ arms remain under its coordination, which may explain why they work cooperatively and don’t “stick” to themselves or otherwise compete.

Fascinating in terms of motor control, octopus arms are powered by a dense muscular structure where the muscle fibers and connective tissue are arranged in different orientations around an axial nerve cord (like our tongues). Able to bend in any and all directions at will, the arms can also elongate quickly, as well as be made relatively stiff; in fact, when it feeds itself, the octopus stiffens its arm and bends it at three precise points, the same way we do, as if it had a shoulder, elbow and wrist.

Notably, male octopuses have a particular arm, the hectocotylus, that doubles as a penis. This appendage has a groove inside that the octopus’ sperm packets (spermatophores) travel through reach the female’s oviducal gland.

To get there, the octopus relies on erectile tissue (much like that of a human penis) in its hectocotylus to get sufficiently stiff, so that the arm can navigate the female’s mantle (the bulbous part that serves as head and body). He enters her through one of two siphons (openings) on the mantle that she otherwise uses to expel waste, breathe or jet water for propulsion. After the sperm is deposited, it will be stored in her oviducal gland for days or even months until she is ready to lay her eggs.

Now it gets interesting. According to recent scholarship, some female octopuses, which are generally a bit larger than the males, will attack and try to kill (and ultimately eat) the males after mating. Often, this occurs while the male thinks they’re still on good terms; for example, scientists recently observed octopuses mate 12 times in a single session, but when the male pushed his luck and went in for the 13th round, she strangled him, lugged him back to her den, and proceeded to eat him over the next few days.

Seemingly knowing this can happen, some male octopuses have been observed taking extraordinary measures to reproduce without being cannibalized, including attempting to disguise themselves as female (although once the arm goes up her siphon, you’d think she’d have a clue) and certain types even detach the hectocotylus after depositing the spermatophores, and then swim to safety.

In any event, dead lover or no, after mating the female is on her own, slow suicide watch. First laying her eggs, which can number in the hundreds of thousands and are fertilized as they pass by the spermatophore-filled oviducal gland, she then guards and nourishes them for the rest of her life.

Keeping watch over her eggs, she defends them against predators and brushes fresh, oxygenated water over them constantly, to the point where she stops eating.

Scientists had a chance to observe a deep-sea octopus, Graneledone boreopacifica, watch over her brood for 4.5 years before they hatched. Found along the slopes of an undersea canyon in Monterey Bay, the scientists returned repeatedly with their submersible to watch her progress.

At each observation they saw that she was covering her eggs, pushing aside (but not eating) crabs and shrimps, and protecting her brood, at the expense of her own health; over the next 53 months, they watched as her condition deteriorated dramatically, and after her brood hatched, they never saw her again and presumed, whether correctly or not, that she died.

Although, it’s not precisely clear how it works, it is believed that the octopus’ reproduction and death are both dependent on its optic gland. Sitting on the optic tract that connects its eyes and its brain, it is believed the optic gland secretes something (perhaps a peptide or a steroid) that triggers sexual maturity, but also de-activates the octopus’ posterior salivary and digestive glands, thus lessening its appetite and leading to its starvation.