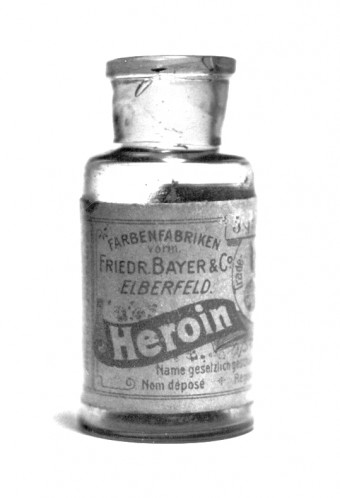 Today I found out the pharmaceutical company Bayer coined the name “Heroin” and marketed the drug as a non-addictive cough medicine, among other uses.

While opium itself has been commonly used since at least 3400 BC, heroin is a relatively new invention, derived from opium.  Heroin, more technically known as diacetylmorphine, was first synthesized in 1874 by chemist Charles Romley Alder Wright, working at St. Mary’s Hospital Medical School in London, England.  He discovered the drug after playing around with mixing morphine with various acids.  Specifically, he created it after boiling acetic anhydride with anhydrous morphine alkaloid for a few hours, which resulted in what we now commonly call heroin.  After running a few experiments with it on animals, though, he abandoned his work on the drug.

Twenty three years later, a man named Felix Hoffman, working at Bayer, in Germany, managed to independently synthesize Heroin when he was trying to produce codeine.  This new derivative of opium was found to be significantly more potent than morphine and so Heinrich Dreser, head of the pharmacological laboratory at Bayer, decided they should move forward with it, rather than another drug they had recently created (Aspirin).

It should be noted that Dreser was apparently well aware of Wright having synthesized Heroin 23 years before, but despite this, he claimed heroin was an original Bayer product and by early 1898, they began the animal testing phase of the product, testing it primarily on rabbits and frogs.  They next moved on to testing it on people, primarily workers at Bayer, including Heinrich Dreser himself.

After successful trials, Heroin was presented to the Congress of German Naturalists and Physicians as more or less a miracle drug that was “10 times” more effective than codeine as a cough medicine and worked even better than morphine as a pain killer.  He also stated that it had almost no toxic effects including being completely non-addictive.  Dreser particularly pushed Heroin as the drug of choice for treating asthma, bronchitis, tuberculosis, and phthisis.

If it seems odd to you that he should push Heroin as a cough medicine, over its pain killing effects, it should be noted that at the time tuberculosis and pneumonia were among the world’s leading causes of death and one of the leading methods to treat this was using codeine, which is fairly addictive given regular use.  Because Heroin worked well as a sedative and respiration depressor, it did indeed work extremely well as a type of cough medicine and allowed people affected by debilitating coughs to finally be able to get some proper rest, free from coughing fits.  Further, because it was marketed as non-addictive, unlike morphine or codeine, it was initially seen as a major medical breakthrough.

Just one year after its release, Heroin became a world-wide hit, despite it not actually being marketed directly to the public, but rather simply to physicians.   Heroin was soon sold in a variety of forms: mixed in cough syrup; made into tablets; mixed in a glycerin solution as an elixir; and put into water-soluble heroin salts, among others. At the end of this first year, it was popularly sold in over 23 countries with Bayer producing around one ton of it in that year.

Obviously, it quickly became apparent that Bayer’s claims of the drug not being addictive were completely false, with reports popping up within months of its widespread release.  Despite this, it continued to sell well in the medical field.  Finally, in 1913, after the number of Heroin addicts began to skyrocket and it became likely that it would shortly be banned in many countries, Bayer decided to stop producing the drug.