June 29, 2015 Melissa
Lynn asks: Why are some cheeses made in wheels and others are in blocks? 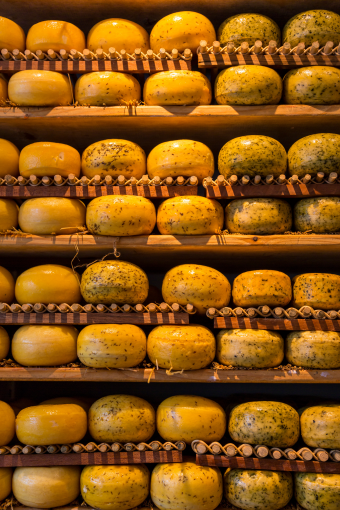 Whether a block, a wheel, a cylinder or a pyramid, a cheese’s shape is dictated by concerns with pressure, salt absorption, ripening, economics and/or tradition.

Cheeses that are made in wheels, like creamy Brie and Camembert, need equal rates of salt uptake, as well as even ripening action from its molds (like P. camemberti and P. candidum) as they break down the milk proteins and produce the delicious ambrosia within. The wheel shape facilitates both as the consistent thickness encourages equal absorption as the surface flora spread; so the disk’s shape keeps the mold from focusing too much on one area (as it would if there were, for instance, square corners, where a higher percentage of molds would work on the edge areas, resulting in an over-ripened edge. These edges in square blocks are often a source of problems in many cheeses if the cheese maker doesn’t get the conditions just right).

Another reason to make a cheese in a wheel, at least historically, is pressure. For example, for traditional rind-covered cheddars, the dry salting method used in their production needs quite a bit of pressure to hold the curd together until it is able to stick on its own. The round molds provide extra strength in pressing, where rectangular molds of the same thickness, even stainless steel ones, tend to lose their shape and even split at the seams over time. As one professional cheese maker noted on the durability of these molds, “design engineers who know cheese plants typically design the item, then double it.”

A third reason for making cheese into a wheel, particularly for those produced in mammoth proportions, is that you can just roll the large wheel rather than lugging it about. Historically, cheese wheels were often made in these very large sizes for sale to marketplaces and if you wanted to buy cheese from the market, you used to have to ask the seller to cut off the amount you wanted from these very large wheels, rather than have cheese you could buy pre-packaged in consumer sized portions.

If none of these issues are a concern, then making cheese in a block  (often from large blocks that are then cut into smaller blocks for consumer usage) is often a wise choice as blocks are easier and more economical to stack, store and transport over long distances.

Other shapes are used as well, sometimes as much to do with tradition as anything else thanks to modern cheese making equipment and environmental controls. These include cylinders and pyramids, which are very popular with goat’s milk cheeses like chèvre. In fact, in France the shape of a goat’s milk cheese tells savvy consumers instantly where their cheese originated. For example, the flat disk of Banon is known to originate in Provençe, while a log of the mild and creamy Montrachet comes from Burgundy, and the striking cheese of Valençay, called either Valançay or Pyramide, is instantly recognizable for its flat-topped pyramidal shape (and loved for its mild nutty flavor).