August 13, 2014 Matt Blitz
Steve S. asks: Who was Monterey Jack and when did he invent his cheese? 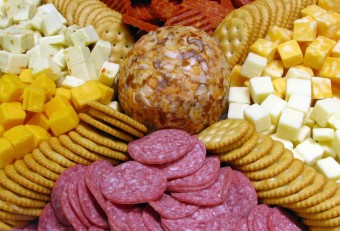 Cheese predates written history. Ancient Egyptians loved cheese so much that depictions of the cheese-making process were painted in tombs. Homer’s Odyssey talks about how Cyclops stored his cheese. The Greeks and Romans used cheese as a delicious currency. During the Middle Ages, if there was cheese on the dinner table, it meant the family was of at least moderately wealth. (For more on all this, see: A Brief History of Cheese) While cheese has been around for ages, many cheeses we eat today were invented over the last five hundred years. A few were even invented in the United States, Monterey Jack cheese being one of them. So, how did Monterey Jack get its unique name? Before we get into that, we must go back about three hundred years to the Spanish monasteries of California.

In the 18th century, Spanish missionaries began their takeover of California. It was on July 16, 1769 when the first Catholic mission was founded at present-day San Diego. Over a sixty year period starting in 1769, twenty one outposts were settled by Catholic priests of the Franciscan order to spread their beliefs among the local population. The second one established, after San Diego, was in today’s Monterey, California.

The Spanish missionaries’ very much desired to be self-sufficient. Although they didn’t quite achieve this (some financial support came from the “Pious Fund of Californias” established in 1697 by Spain; later, this would become the subject of litigation between the US and Mexico), they brought supplies, foodstuffs, seeds, and livestock into California never before seen in the Americas. For example, grapes, apples, and figs were grown for the first time in this part of the world at this time. These fruits had originated in Asia, but had come over to Europe before this as a product of trade. Oranges (also originally from Asia) actually were planted for the first time in North America in the Gulf Coast and Caribbean regions about 150 years prior (approximately in the early 17th century) , but made their first appearance on North America’s west coast due to Spanish missionaries.

Livestock, like cattle, were also part of the European colonization of America. Arriving in the mid-17th century from Europe, cattle were a huge food and supply source (e.g. leather) for the settlers. Of course, milk  also came from these cows. Any fresh milk that wasn’t used was preserved by converting it into cheese.

In Monterey, the cheese they made was soft, creamy, and light and became part of the Spanish missionaries’ regular diet. They called it, “Queso blanco pais,” or “the country peasant white cheese.” Hence, the Monterey part of the name “Monterey Jack,” with the town itself named after the viceroy of New Spain, Gaspar de Zúñiga Acevedo y Fonseca, the 5th Count of Monterrey. (The latter “Monterrey” ultimately derives from the Galician “Monterrei,” essentially meaning “mountain king.”)

But what about Jack?

Fast forward about seventy years, to 1841, when a Scottish immigrant by the name of David Jack arrived in New York. He became a storekeeper with his two brothers, who had already been in America. It’s not clear exactly what their store sold, but at some point they became army contractors and hosted military personal, including one Robert E. Lee.

Apparently unsatisfied with store life and having heard about the great fortunes to be made in the California Gold Rush, in 1848, Jack made his way west. Before he left, though, he bought $1,400 (about $37,169 today) worth of revolvers in hopes of selling them out west to “law-abiding and lawless alike.” He did exactly that and made a heady profit. His gold speculating wasn’t as profitable, though, and like so many others he moved to San Francisco to try to make ends meet. He became a customs agent and found his way to Monterey on a business trip. Jack fell in love with the central coast town and officially moved there, but he struggled. In fact, he went back to Scotland for a year when his father passed away. But he returned, determined to become a rich member of the community.

In 1821, Mexico gained their independence from Spain after an eleven year war to earn the right. In order to encourage expansion, the Mexican government continued what the Spaniards had started by issuing land grants, or ranchos, to individuals. These individuals were allowed to settle, farm, and use the land however they sought fit. In 1846, only twenty five years after Mexico’s independence, the US Army invaded the Mexican territories of New Mexico and California and the Mexican-American war began. This wasn’t the first time the United States had forcibly tried to take land from Mexico. In 1845, America had “annexed” Texas. Within twenty two months, the US had won the war and their territorial expansion to the Pacific Coast was complete.

The Treaty of Guadalupe Hidalgo allowed at least somewhat of a conciliatory end to the war. The treaty called for several major concessions on both sides. Mexico was to cede California, New Mexico, and the rest of Arizona to the US, plus it recognized the US’s claim to Texas. In return, the US would pay Mexico $15 million (about $398M today), offer citizenship to any Mexican living in those lands, and still uphold the rancho system set up by the Mexican government. While these promises, in theory, were kept, the United States government found a way around that last provision.

US government-run commissions were set up to determined who actually owned the ranchos. The rancho owners were forced to provide documentation, deeds, and records in order to prove that this was their land. Many could not do this due to the years that had past since coming into ownership and the lack of need for this type thing while Mexico was still in charge. Historians believe that this was a simple US-controlled land grab, taking land by instituting rules and regulations that were unfair to rancho owners.

This is where we go back to Mr. David Jack.

In 1853, with the US still sorting out all the land grants, the pueblo of Monterey attempted to make its claim that the land belonged to the town, not the US government. They hired Delos Rodeyn Ashley as their lawyer. He would later to go on to be California’s treasure and a Nevada Congressmen. He actually won their claim for them, but demanded nearly a thousand dollars in fees. The town was broke and was forced to auction off its lands anyway to pay Ashley.

On February 9, 1859 at 5 pm, the auction commenced. The sole bidders were Ashley and David Jack. They purchased every single inch of land in Monterey that day, nearly 30,000 acres, for $1002.50. Thus, Ashley got his money from the city, and then some when he later turned over his rights to the land to Jack. It was not hard to believe that this was some sort of set-up. A suit concerning the auction and subsequent purchase went all the way to the Supreme Court and became known as “The Rape of Monterey.”

David Jack quickly profited on his purchase through farming, grazing, and charging obscene taxes on those who had built on it. He was ruthless. Jack acquired even more land and immediately began foreclosing on properties. He did this by posting foreclosure notices on hard-to-find parts of individual properties and in a different language- as in, if it was a Mexican owner, the notices were in English. If they were English speaking Americans, they were in Spanish.

These lands hosted many types of business that Jack now “owned,” including 14 different dairies that were operated by Spanish and Portuguese dairymen within the Monterey lands. When they had excess milk, they preserved it by turning it into cheese, the special “Queso blanco pais,” or “the country peasant white cheese,” much like their missionary forefathers. Well, since Jack co-owned these dairies, he claimed this cheese as his own. He slapped his name on it and called it “Jack’s Cheese.” Soon, the cheese began selling across California and the west coast. In order to identify where it came from, people began calling it “Monterey Jack” cheese. As you can imagine, David Jack was just fine with this.