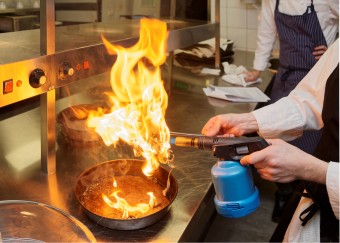 If a recipe called for you to blanch some almonds, would you know how to do it? Cookbooks are full of techniques that are a mystery to most of us, even if their names sound familiar.

There are many different ways to cook food, and each method affects food differently. Most techniques can be broken down into two categories: wet and dry – but it’s not quite as straightforward as you’d think.

Boiling is simply the cooking of food in water-based liquid at a full boil. It’s best for starchy or hard foods, such as pasta, potatoes, rice, beans, and hardier vegetables, but it can damage softer foods, such as fish. Boiling is also used to reduce-making foods like sauces or gravy thicker by steaming off water-and to decontaminate foods that may have come in contact with bacteria.

Blanching involves plunging food into boiling water for just a moment, and then removing and plunging it into ice water to stop the cooking process. It’s commonly used to loosen vegetable or fruit skins for removal, to brighten the color of vegetables, and to remove bitterness. Tip: Use plenty of water-the more water you have, the less the temperature will drop when you add the food.

Parboiling is partially cooking something in boiling water, often to make a later cooking technique quicker. You might parboil hard vegetables such as carrots, for example, so they don’t come out too hard when being stir-fried with softer vegetables. Or you might want to parboil chicken to speed up grilling. Parboiling is also used before freezing vegetables, although some require only blanching.

Poaching is cooking in water (or wine, milk, stock, etc.) below boiling temperature, at 160° F to 180° F. You should be able to see the water circulating but not bubbling. This is a gentle method that works well with delicate foods such as eggs, fish, or fruit. In submersion poaching, the food is completely covered with liquid; in shallow poaching, the water comes about halfway up the food, with the pan covered thereby both poaching and steaming the food. Tip: When poaching eggs, add a touch of vinegar to the water to get the whites to form a nice, neat shape.

Simmering is the step between poaching and boiling, done at temperatures of between 180° F and 205° F. It’s a slow method for preparing stocks and soup, and to soften up tougher cuts of meat-the ones around “the hoof and the horn,” such as chuck, shank, and brisket. To get a proper simmering temperature, bring the water to a full boil, and then turn down the heat until you see tiny bubbles occasionally rising to the surface.

Steaming is cooking with the steam from boiling liquid. It’s considered a healthy cooking technique because it adds no oils to food, and nutrients don’t leach out into the water as they do with submersion techniques. The steam doesn’t have to come from a liquid in the bottom of a steamer-it can come from the food itself. A good example is fish cooked en papillote (“in paper”): Wrap fish in parchment paper and heat it (in an oven or over a fire, for example), and let the fish’s own juices steam it from inside.

Stewing is the simmering of meats and vegetables (cut up into bite-sized pieces) in liquid that covers the food completely. It’s good for tough meats, but any meant or fish can be stewed. Braising is similar to stewing, but the food is browned first (see below), then only half-covered with liquid, and the pot is always tightly lidded to keep the steam in.   A classic example of a braised dish: pot roast.

Baking is prolonged dry cooking by hot air-in an open or enclosed oven-at temperatures ranging from 270° F to 450° F. It’s used for a variety of foods, including bread, cakes, pastries, pies, potatoes, beans, and lasagna, just to name a few. (Baking can also be done on heated surfaces, such as on hot rocks.)

Roasting is essentially the same as baking-cooking with heated air in an oven-but the term roasting is used when the food is meat. (Or chestnuts. Nobody seems to know why.) Roasted meat is usually set on a wire rack in a pan, so the bottom of the meat doesn’t get soggy, and the juices collected in the pan are often basted onto the meat while cooking. (Roasting can also be done over an open fire, as in roasting a pig on a spit.) Tip: Meats that have been roasted should rest for 10 minutes or so after cooking. That allows the juices to settle and not run out during slicing.

Blackening is a technique used to cook fish. It’s done on a very hot and very dry cast iron skillet. (If white ash spots appear on the skillet, you’ve gone a little too far.) The fish dipped in melted butter, rolled in spices, dropped onto the skillet, and cooked for one to two minutes per side. Tip: don’t do it indoors unless you’ve got really good ventilation. Blackening creates a lot of smoke.

Broiling (called grilling outside the United States and Canada) is cooking food via heat radiating off a flame or element from above. The food sits on a grill or slotted tray, allowing oils to drip away from the food.   It’s sometimes recommended to keep the broiler door open a little, to prevent the thermostat from turning the element or flame off, as you want constant heat. Broiling is best for tender meats-it doesn’t soften meat as much as it adds flavor via browning.   Barbecuing follows the same basic rules, except that the heat source is under rather than above the food.

Browning, also called searing, is quick-cooking a food’s surface at high heat. It can be done in a pan, in an oven, or on a barbecue.   Browning affects naturally occurring sugars and proteins in food, and can change and greatly enhance its colors, textures, and flavors.

Deep frying is complete submersion of food in oil heated to between 350° F to 375° F. Done correctly, the oil turns the water in the food to steam, which not only prevents the oil from getting into the food (the pressure of the escaping steam keeps it out) but it cooks the food from inside. Deep frying gets a bad rap, but when it’s done properly, it can actually be an economical, safe, and healthy cooking technique.

Sautéing is pan frying on a very hot pan with just a thin layer of oil. It’s meant to be done quickly, to prevent the food from absorbing the oil.   The food, which is cut into similarly sized pieces so they cook uniformly, is turned often, causing a slight browning on all sides of the food. (Sauté means “jump” in French, and refers to how the food is moved about in the pan.)

Stir frying is frying at a much higher temperature than sautéing. Chinese in origin, it can be done in a wok, in a regular pan, or on a griddle.   The food is chopped into bite-sized pieces and cooked for just a short amount of time.