Why Don’t Snakes Get Sunburned?

March 17, 2015 Melissa
Jim asks: Do non-human animals ever get sunburned? Why don’t things like snakes and other cold blooded animals seem to get burned even though they lay in the sun all day? 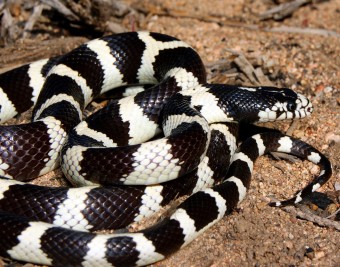 Without a protective coating of feathers, fur or scales, pretty much any animal with exposed skin can get a sunburn; luckily, most animals have adapted methods of avoiding the sun and mitigating the damage.

Farmers have long known that naked animals, like freshly shorn sheep and domesticated pigs (who’ve had their thick coating of back hair bred out of them), can get a sunburn. In fact, although uncommon, even light-furred and hairless dogs and cats have been known to burn.

Likewise, naturalists have observed burns from ultraviolet radiation on elephants and rhinoceroses, and in fact, even whales, fish, amphibians and dolphins occasionally get a burn from the sun.

In research published in the Proceedings of the Royal Society in 2010, scientists reported that certain whale species, notably the relatively light-skinned blue whale, not only would suffer from sunburn, but that the rate of sunburn in the marine mammals was increasing over time. The researchers theorized that ozone layer loss and thinning cloud cover could potentially be to blame for the increase.

Those same scientists also found that, even though sperm whales spend significantly more time on the surface in between dives (7 to 10 minutes) when compared with blue whales (about 2 minutes), the darker sperm whales were far less likely to suffer from sunburn. Further research also revealed that the sperm whales’ skin has a protective protein that inhibits UV cellular damage.

Notably, although the blue whales’ incidences of sunburns were increasing, the scientists did find evidence that the species is able to tan, so sun exposure did not always result in such damage.

Likewise, many land animals have also adapted methods of protection from the sun. For example, pigs and rhinoceroses wallow in mud, as do elephants who are also known to seek out shade, toss dirt and sand on their backs and create protective shadows for their little ones.

Hippos secrete an oily, pinkish-red liquid, particularly around their ears and faces (the only parts typically above the water’s surface for any length of time) that absorbs ultraviolet light and also is, apparently, naturally antibiotic.

As for snakes and other reptiles that at times bask in the sun, their inner epidermis is protected from UV rays via their scales, which also function to help retain moisture underneath, among other things. For these animals, they would typically die from overheating before any threat of sunburn became a problem.