March 31, 2015 Melissa
Sean M. asks: Why does chicken go bad so much faster than other meats at room temperature? 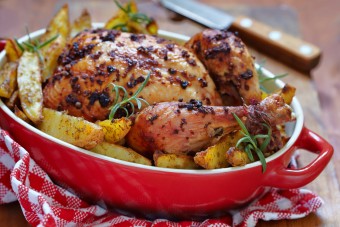 Food-borne bacteria are the primary cause of spoilage and food poisonings. Thriving in moist, low-acid environments where lots of protein is present, pathogens like Salmonella, Campylobacter and E. coli live with the bird during its life and stay with its meat after slaughter; likewise, other bacteria, such a Acinetobacter and Pseudomonads fluroescens, putida or fragi, thrive on the meat after it’s processed. Given chicken’s somewhat unique qualities, quick spoilage is inevitable, and can only be mitigated by careful attention to time, temperature and moisture.

Bacteria need water to survive, and grow on foods with a water activity of at least 0.85. Chicken, like most other fresh meats, has a water activity of 0.99, and thus provides an ideal environment. In addition, unlike many other meats, the water and ice used to process chicken doesn’t dry off the meat after it’s washed and chilled, and as a result chicken skin retains more water on the surface of its skin, providing an enticing home for a variety of bacteria.

Although some pathogens like Salmonella have difficulty growing in low temperatures, other bacteria thrive there, and at a population of only about 105 cfu/cm2, psychrotrophic bacteria will begin to spoil food; notably, the identifying slime that can grow on stored poultry doesn’t appear until the spoilage bacteria have reached a much higher concentration of at least 3.2 * 107 cfu/cm2.

Nonetheless, temperature plays a large role in preventing food poisoning, and in order to ensure the Salmonella and E. coli inside the bird are dead, chicken must be cooked to an internal temperature of 165 degrees Fahrenheit, and kept there for at least 15 seconds.

Time plays a part as well and is heavily influenced by temperature. Where chicken has high levels of psychrotrophic bacteria, in the range of 100,000 cfu/cm2, the meat will begin to spoil within 1 to 2 days. Likewise, even if the meat had low levels of spoilage bacteria, if it is kept above a temperature of 68 degrees Fahrenheit but below the threshold required to kill off most microbes, the meat will spoil within 2 days.

Furthermore, even when food is properly cooked, if it is left out in a temperature range of between 40 degrees Fahrenheit and 140 degrees Fahrenheit, bacteria will proliferate, and under the right conditions, the number of microbes will double every 30 minutes. As a result, food safety experts recommend that once chicken has been left out for two hours in this temperature range, it is too dangerous to eat.