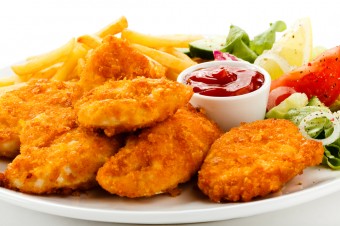 Chicken nuggets are delicious. I know this isn’t a particularly controversial statement. Despite pink slime, chemical preservatives, and sometimes questionable nutritional value, it’s hard to argue the basic point that these deep-fried, previously frozen, nugget-shaped “chicken” pieces are at least somewhat appealing to the human taste bud. The common assumption is that McDonald’s was the first to give us these small morsels of “food.” But that is untrue. No, the story of the chicken nugget begins with Robert C. Baker, a Cornell professor and the so-called “George Washington Carver of poultry.”

Growing up in the Finger Lake region of New York, in the small town of Newark, Baker was poised to take over his family’s farm, which grew fruit in the summer and raised up to four hundred chickens in the winter. His mother made chicken and biscuits every Sunday, only after she chopped off the head and let it die in a pail first. Said Baker, “(chicken) probably did taste different (than today). But do you want to put up with that to get the taste?”

He was just a young boy when, in 1929, the Great Depression swallowed all of America and hit farmers especially hard. Robert and his family were forced to learn how to save, scrap, and make a cheap meal. This became ingrained into Baker’s thinking years later, when he was attempting to figure out ways to create meals that provided the most amount of food and nutritional value for the least amount of money.

He attended the local college, Cornell University, in 1939 and majored in pomology, the study and cultivation of fruit. The US officially entered into World War II in 1942, but Baker was exempted from the draft due to his college studies. He graduated in 1943 and went to work for the Cornell Cooperative Extension as a liaison between the university research centers and local farm communities.

As the war wound down, so did the demand for chicken. Production supplies, food, and machines increased significantly across America during World War II, literally pulling the country out of the remnants of the economic depression. During this time, poultry farmers had developed ways to grow their output, including advancements in feed and genetics. When the war ended, farmers didn’t want to decrease production and sacrifice money in their pockets. So, they had to find ways to increase the market for chicken.

For years, chickens were only sold whole, making it inconvenient and inefficient for the common household. It was too big for one person to eat, but not generally big enough for a whole family. Additionally, beef and pork were sold in cuts, making them a much more convenient product. Chicken sat third in the American meat hierarchy, behind cow and pig, perhaps not surprising given that chickens were originally domesticated not for food, but for cockfighting.

Meanwhile, Baker had begun to develop more of an interest in the other aspect of his family’s business – chicken raising. He worked with the National Poultry Improvement Plan, an organization created in the 1930s whose first task was to combat pullorum disease that caused nearly an eighty percent mortality rate among baby chickens. He went on to earn a masters in marketing from Pennsylvania State University and was hired soon after by Cornell as an assistant professor in Poultry Science. He was tasked with finding ways to encourage people to eat more chicken.

Under this task, Baker became a local celebrity with the development of  his “Cornell Chicken,” a delicious grilled chicken recipe that included vinegar, oil, egg and a barbecue sauce he developed while at Penn State. He sold his chicken himself at the New York State Fair and, to this day, you can still get “Cornell Chicken” at the yearly end of summer fair. In 1957, Baker became the head of the new department of food science at Cornell. With that, he earned himself a lab in which he could develop, test, and taste new chicken products. His lab was stuffed with grinders, blenders, and de-boning machines to help his research.

Among the products he created included chicken bologna, chicken sausages, chicken hot dogs, and chicken patties. Some of it, according to his wife, “was really bad.” He helped invent the “broiler chicken,” a two to three pound chicken more attractive to consumers and quicker to produce for farmers. His work even involved making eggs more attractive to consumers, turning them into treats for children with a product called “Kids Pak Egg Carton” and developing a recipe for French Toast with extra egg. Baker’s background in marketing also allowed him to develop advertising campaigns, create splashy packaging, and track sales, For his efforts, the New York Times later would call him, “something of a chicken Edison.”

More importantly than the products themselves was what Baker developed to create these products, a method  that “processed chicken,” which allowed the meat to be shaped in any way possible. This came in handy for Baker’s greatest chicken invention: the chicken stick.

In 1963, working with a student of his, Joseph Marshall, they figured out how to keep ground chicken meat together without a skin while keeping a delicious batter attached to the meat. First, they put raw chicken in a grinder with salt and vinegar, to take out the moisture. Next, they added powdered milk and mashed up grains. This kept it all together. Then, they molded the processed chicken into a shape, in this case a stick, froze them, dipped them in an egg batter and cornflake crumbs, and froze them again, this time to negative ten degrees. This whole process kept everything together and, of course, tasted pretty good. They developed a package and put it in the local freezer shelves. Within six weeks, they were selling two hundred boxes a day. The rest is nugget history.

But here’s the thing: Baker rarely gets credit for his invention. The reason being is that Cornell published the whole process and all of his recipes in the April 1963 issue of Agricultural Economics Research, a publication that was distributed for free to over five hundred companies. He also never patented a single product he invented; he was doing this for the greater good. One of the companies that probably did receive the publication was McDonald’s, though the company has since said they never made contact with Baker. Said Robert Gravani, a Cornell professor who studied under Baker, “He literally gave ideas away, and other people patented them.”

In 1977, the McGovern Report was released, urging Americans for the first time to eat less red meat. Prepared by the US Senate Committee on Nutrition and Human Needs, which was led by former presidential candidate George McGovern, the report suggested that citizens, “decrease their consumption of meat and increase consumption of poultry and fish.” McDonald’s, considering their main product was red meat, suffered. Burger sales dropped and the company immediately went to work developing a new product that kept patrons coming through the golden arches. While there is no proof that McDonald’s stole any ideas from Baker, and even if they did, he never patented it, so legal action wasn’t an option, it’s generally thought they had knowledge of his research or had seen a version of the product elsewhere. In March 1980, fifteen Knoxville, Tennessee McDonald’s debuted a new product, the Chicken McNugget. It set sales records and, soon, the chicken nugget was at every McDonald’s worldwide.

Robert Baker invented the chicken stick, later reshaped into a nugget, not because he wanted to fatten up America, but because he was trying to find cheaper and more efficient ways to make a meal out of chicken. He didn’t make a dime off of his profitable invention, but was elected to the American Poultry Hall of Fame in 2004. So that’s something at least…