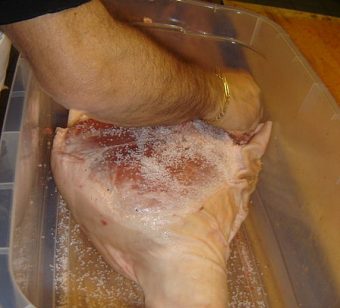 Today I found out why salt preserves meat.

While today salting meat as a method of preservation is generally only commonly used in such things as salted pork and the like, salt has been used as the primary method of preserving meats and various other foods as far back as history records.

Salt has a preservative effect thanks to the osmotic pressure it creates via absorption.  For example, if you take a red blood cell and place it in water, thanks to osmotic pressure and the fact that the cell membrane is thin and semipermeable, the cell with its relatively salty interior next to the pure water will gradually absorb more and more water until it explodes.

On the flipside, if you place that same red blood cell into water that is saltier than the cell’s interior liquid, the reverse will happen and the cell will gradually lose water, shriveling up in the process. Place it in water that has the same sodium level as the cell, and nothing at all will happen.

This same effect will happen with most mold and microbes.  So if you use the salt for its absorption effect to increase the osmotic pressure, these things that may spoil the meat will have trouble surviving and reproducing as their moisture is sucked from them.  The more salt added to the item (or sugar, which has the same effect and is often used to help get around the strong salt flavor), the longer the preservative effect will last.

You can also observe this absorption effect simply by taking some cotton candy and placing it in a humid environment.  With just 33% relative humidity, cotton candy left out in the air will completely collapse and crystallize in just 3 days as it absorbs the moisture in the air.  At 45% relative humidity, it will completely collapse in just one day.  At 75% humidity, it takes just 1 hour.  This is why it has only been since 1972 that non-“made on demand” cotton candy has been available. (1972 was when the first fully automated cotton candy machine was invented that could make the fluffy treat and quickly package it in water tight containers).

If you’re wondering how to salt meat for preservation, the process is fairly simple and straightforward, though there are a variety of variations on the basic method used to improve flavor.  In general, you simply rinse the fresh meat in cold or lukewarm water, then pour a thin layer of salt (generally kosher salt) all over the meat and rub it in.  Next, hang or set the meat out in a cool environment (under 60 degrees Fahrenheit, but not below freezing) for a couple weeks to dry it out a bit.  Finally, before cooking the meat, rinse off the salt with water.

In theory, if you use enough salt or sugar when doing this, you can even preserve meat for decades, though of course the amount you’d have to use would probably make it unpalatable.  At the minimum, if you’re only using salt or sugar with no other preservative method like smoking or the like, it’s generally considered that about a 20% salt concentration on the surface of the meat is needed to kill off most types of microbes and fungi that can spoil food quickly.