February 17, 2014 Emily Upton
Harriet W. asks: What is the difference between brown and white eggs? 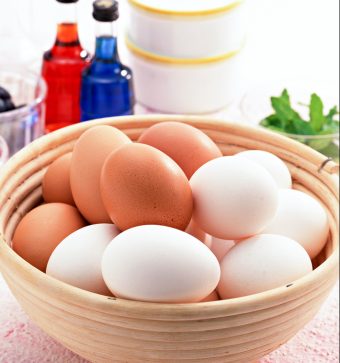 We here at Today I Found Out are all about uncovering the truth amongst all of the myths, and so here is the fascinating difference between brown eggs and white eggs:

Seriously, brown or white, they are the same on the inside, with one minor caveat which we’ll get to in a minute that has nothing to do with whether the chicken is a brown egg layer or white.  But besides that caveat, a brown egg or a white egg will give you the same amount of nutrition, they taste the same, and they are equally delicious in quiches and cakes.

The two also have more or less the same shell thickness.  The differences in shell thickness that you may have observed likely has to do with the age of the chicken- young chickens lay eggs with shells that are typically harder than older chickens’ eggs, but this is true for both white and brown egg layers.

How the rumours started about brown eggs being “better” is thought to be because they are often more expensive at supermarkets. If something costs more, it has to be better quality or better for you, right? Not in this case (and not in many others either- increasing the price of something, sometimes drastically, is an occasionally used marketing trick to get people to think one product is better than a comparable cheaper product. Sometimes that’s true, but many times it’s not.)

As for egg prices, brown eggs cost more in part because the hens that lay them usually eat more, which means the hens cost more to keep per egg.  You see, white eggs are most often laid by white or light coloured hens with white ear lobes, while brown eggs are most often laid by red-feathered or brown / dark-feathered chickens with red ear lobes. (This is not a universal truth, just a general rule.  Further, the chicken’s ear lobes are really the indicator here, not the feathers, but there is a very strong correlation between ear lobe colour and feather colour, so feather colour can be a decent indicator too. Ultimately, egg colour is determined by genetics, but the ear-lobe / feather colour thing is a good, though slightly flawed indicator.)

In the end, red-lobed chickens tend to be larger than their white-lobed counterparts, which is why they eat more. The farmers need to get reimbursed for the extra feed somehow, so they up the price of the brown eggs.

This also explains why white eggs tend to be more popular in supermarkets. White-lobed chickens cost less for farmers to keep, which leads to cheaper eggs, which leads to grocers buying more white eggs to put on the shelves to offer this product cheaper to customers. White eggs are simply more cost-effective.

There is also a commonly touted myth that brown eggs taste better, and that’s why they’re more expensive. As noted, this white egg / brown egg taste difference is a myth.

But the potential difference in taste from one egg to another does lead us to our one caveat, though it isn’t anything to do with the colour of the egg—rather, it has to do with the chicken’s diet. Many chickens raised at home are brown-egg layers, while most of the chickens raised for commercial use are white-egg layers.  The different diets affect the taste of the eggs and even the colour of the yolk, similar to how diet can drastically affect the taste of the meat of some animal.

However, if you were to take one of those brown egg-laying chickens and raise it on the same food as a white egg laying chicken, their eggs would taste the same and be otherwise indistinguishable aside from the colour of the shell. If their diets are the same, the yolks will even be identical in colour.  Today, chickens raised for commercial purposes, whether layers of white eggs or brown, are all getting fed the same thing, with perhaps just a slight variance from company to company.  If you’ve had some brown eggs from a neighbor or a chicken of your own that’s fed a different diet than commercially fed chickens eat, then there may be a difference in taste.  It just doesn’t have anything to do with the colour of the egg.

So, if brown egg-laying chickens are more expensive to feed and to keep, why do farmers keep them around? The answer is that so many people buy into the “brown eggs are better” myth that brown eggs are still a viable business option. As long as people keep buying the more expensive eggs and are willing to pay marked up prices beyond factoring in the extra feed, farmers will keep raising chickens that lay them.

Of course, these days some of the most hotly debated arguments aren’t over white vs. brown eggs, but over the superior quality of organic vs. not organic eggs, or free range vs. cage eggs. While differences in diet can affect the taste, if you’re wondering about quality of the egg or nutritional value, a study done by D.R. Jones et al. through the Agricultural Research Service and published in Poultry Science in 2010 found that, ultimately, there is very little difference in the quality of eggs produced in these different ways.  The small differences they did find “varied without one egg type consistently maintaining the highest or lowest values.”

So, in the end, while there are small ways the composition and taste of chicken eggs can be influenced, the colour of the egg shell isn’t one of them.