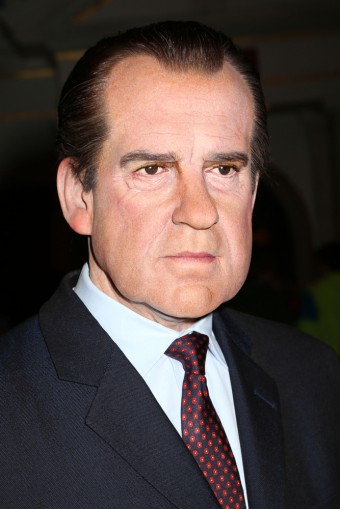 Developed from game theory and a key tactic of his early administration, President Richard Nixon came into office with a clear plan – scare the hell out of other world leaders to get them to do what he wanted. Called the “madman theory,” it depended on possessing a massive nuclear arsenal, then simply acting sufficiently erratic and unbalanced to convince people that you were crazy enough to use it.

During the 1968 Presidential campaign, Nixon promised to end the war in Vietnam and obtain “peace with honor,” yet nearly one year into his first term, he was having little success. Peace talks between the North Vietnamese (supported by the Soviet Union) and the South (supported by the United States) had devolved into little more than sitting at a table, with the North Vietnamese saying they could wait “until the chairs rot.” Frustrated, Nixon decided it was time to use his secret weapon – his own reputation as a violent and unhinged, rabid anti-communist who wasn’t afraid to drop a nuclear bomb or two.

This reputation was, at least in part, carefully crafted by Nixon and his national security advisor, Henry Kissinger. As Nixon told his then-aide, H.R. Haldeman (later Nixon’s White House Chief of Staff who ultimately spent 18 months in jail for his role in Watergate):

I call it the Madman Theory Bob. I want the North Vietnamese to believe I’ve reached the point where I might do anything to stop the war. We’ll just slip the word that, “for God’s sake, you know Nixon is obsessed about communism. We can’t restrain him when he’s angry – and he has this hand on the nuclear button” and Ho Chi Minh himself will be in Paris in two days begging for peace.

A common example from game theory demonstrates how this works: Two people, chained together, are placed at the edge of a cliff. As soon as one says “uncle,” both will be released, but the other, the guy who held out the longest, wins a big prize. One implementing the “madman theory” would try to bluff his opponent into thinking he just may jump off of the cliff by inching closer, dancing and walking near it, and talking crazy. If he is sufficiently convincing, the other will yield.

This is precisely what Nixon was trying to do with the North Vietnamese – appear absolutely impatient, totally reckless and even a bit insane – in order to convince them to cry “uncle.”

When it became clear it wasn’t working on the North Vietnamese, Nixon decided to try bluffing North Vietnam’s benefactor (and chief military supporter), the Soviet Union. Beginning on October 10, 1969, Nixon ordered the Strategic Air Command (SAC) to prepare for battle, while Kissinger engaged in a campaign of “all sorts of signal-type activity . . . .around the world to try to jar the Soviets and . . . North Vietnam[ese].”[1]

Called Giant Lance, on October 27, 1969, the operation launched 18 B-52 bombers, each armed with nuclear weapons, toward the eastern border of the Soviet Union. Unbelievably reckless, the bombers even required mid-air refueling – a procedure that posed the risk of the aircraft colliding and dropping their nuclear bombs at the border, something hardly advisable in such tense times, even if they weren’t armed. (Note: In January of 1966, a mid-air refueling of a B-52 resulted in four nuclear bombs accidentally being dropped on Spain.)

Halting at the edge of Soviet airspace, the nuclear-laden bombers prowled the skies for three days, taunting Soviet aircraft that had been launched in response. On the diplomatic side, Soviet General Secretary Leonid Brezhnev sent the Soviet ambassador to the U.S., Anatoly Dobrynin, to meet with Kissinger and Nixon. At this meeting, Nixon continued with his “madman” ploy – lashing out at and even threatening the ambassador, who reported to Moscow: “Nixon is unable to control himself even in a conversation with a foreign ambassador.”

Believing they had achieved their goals, on October 30, 1969, Nixon recalled the bombers and ended Giant Lance. He and Kissinger were convinced that this sudden reversal of tactics only reinforced his “madman” image in the eyes of the Kremlin, and enabled the arms deal that followed on its heels.