The Last Gasp of the Vietnam War: Operation Frequent Wind 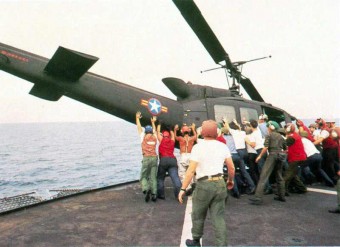 Over two days in April 1975, as the forces of the North Vietnamese Army were poised to take the South Vietnamese capital of Saigon, members of the U.S. armed forces, its embassy in South Vietnam and its Defense Attaché Office evacuated over 7,000 people using only helicopters.

The End of the War

Although the United States had withdrawn its combat troops in 1973, thousands of Americans remained behind, including those stationed in Saigon at the Defense Attaché Office (DAO) and the U.S. Embassy. By March 1975, North Vietnamese troops were closing in on the capital, having captured several strategic sites including Da Nang, Ban Me Thout and Song Be.[i]

Seeing the writing on the wall, the U.S. began to evacuate its personnel and others, including Vietnamese orphans through Operation Babylift. From April 1 to April 29, 45,000 people, including over 5,000 Americans, were evacuated from the country using a variety of aircraft including commercial and military aircraft.

Things took a turn for the worst, however, beginning on April 27:

North Vietnamese forces were close enough to launch rockets into Saigon. That ended the use of the C-141s for the evacuation . . .  [although] C-130s . . . continued to evacuate personnel to the Philippines . . . Conditions in Saigon deteriorated on April 28, when North Vietnamese aircraft bombed Tan Son Nhut and destroyed one C-130. . . . By early morning on April 29, the use of fixed wing aircraft for evacuations ended.

To assist with the evacuation, the Navy had moved a large number ships off of the Vung Tau Peninsula in the South China Sea. Several aircraft carriers were among the group, including the Hancock, Enterprise, Coral Sea, Okinawa and Midway.

Navy and Air Force fighters provided air support for the evacuation, which included 71 U.S. helicopters and 20 from Air America.[ii] In addition, a large number of Vietnamese evacuated themselves in boats, helicopters and other aircraft (these latter flown by Vietnamese Air Force personnel). The entire U.S. air operation was controlled through a “USAF C-130, Airborne Command and Control Center” that remained in the sky throughout the evacuation.[iii]

In advance of the operation, the Embassy had prepared and distributed instructions for those civilians who were to be evacuated. These included a coded signal to be broadcast on Saigon and Armed Forces Radio:

It was a bizarre Kafkaesque time because as those helicopters came into the Embassy one could hear wafting in over the walls of that citadel the strains of Bing Crosby’s “I’m Dreaming of a White Christmas.” That was a code . . . It was supposed to summon all Americans to various staging points.

The ground operation, which was to ferry evacuees to lift-off points, primarily the DAO, was soon stymied as terrified Vietnamese who were not eligible for the evacuation tried to leave the country. Many collected at the DAO, as well as the American Embassy, the latter of which was only to be an evacuation point for its embassy staff.

The start of the air operation was also delayed and did not begin until about 2 p.m. at the DAO. Things ran smoothly, however, and the first evacuees were safely unloaded at about 3 p.m. By 9 pm., the last from the DAO were loaded onto helicopters, and by the end of the day, about 5,000 people had been safely cleared from it.

At the U.S. Embassy, though, things were really bad: “thousands [of people]. . . climbed fences and pressed the Marine guard in their desperate attempt to flee the city.”

To evacuate as many as possible before the city fell, marines hastily arranged for more landing spaces, including cutting down trees and moving vehicles from the parking lot.

Forced to wait until the evacuation at the DAO was complete, the air lift at the Embassy did not begin until about 10:30 p.m.[iv]  Arriving in 10 minute intervals, the helicopters had a difficult task:

Flying at night through ground fire over Saigon and the surrounding area, [the helicopters] had to pick up evacuees from dangerously constricted landing spaces at the embassy, [including] one atop the building itself.

As the North Vietnamese were closing in, the President of the United States made a tough call:

At 0345, 30 April, President Ford ordered Ambassador Martin to stop the evacuation of foreign nationals. All flights out would evacuate the Americans. . . . although Ambassador Martin wanted to evacuate all friendly South Vietnamese. The President ordered Martin to leave on the next helicopter . . . . The Marines had special orders to arrest and take Martin if he refused to evacuate.[v]

By 5 a.m. on April 30, the last evacuees left the Embassy, from which approximately 2,100 people had been saved, over half of whom were either Vietnamese or third-country nationals. Sadly, about 350 Vietnamese who were eligible for evacuation were left behind.[vi]

During the operation, U.S. aircraft had flown 1,422 sorties, including 660 by the helicopters alone. By 12 p.m. on April 30, 1975, “Communist flags waived over Saigon’s Presidential Palace.”

In addition to U.S. forces, a number of South Vietnamese participated in the airlift – although they were not part of the original plan:

Some of the South Vietnamese aircraft had flown out to the ships at sea, probably by following American evacuation helicopters. Those which recovered on small ships . . . discharged their passengers, then were dumped into the South China Sea, at least 45 South Vietnamese Air Force helicopters met their fate in this fashion.[vii]

Other small aircraft were involved as well, including in the heroic flight of South Vietnamese Air Force Major Bung-Ly:

Out of nowhere this little Bird Dog . . . an observation airplane – he was circling the ship and all of a sudden he flew right down the flight deck at about 100 feet. And he did this like, two or three times. He tried to drop a note on the flight deck. . . . The third one stayed . . . . And this note said “I can land on your runway, would you please move the helicopters to the other side  . . . I have one more hour of fuel. . . . would you please rescue me?” And he signed it Major Bung, wife and five children

Although with other such pilots the SOP was to have him ditch the aircraft in the sea and a rescue craft with swimmers would retrieve him from the water, the Midway’s commander, Captain Chambers knew this wouldn’t work:

“If he ditches in the water, he’ll lose those five kids” . . . . that little airplane is a tail-dragger. It would have nosed over and we would have never gotten the kids out of there

So the decision was made to clear the deck for Major Bung’s landing, which required pushing helicopters over the side of the ship. Then the carrier was turned into the wind:

We had 30-40 knots . . . and he started his final approach. He then made a beautiful carrier landing without a tail hook. He touched down right in the wire area . . . . right where he should have, bounced once, rolled up the deck and was stopped before he got to the end . . . . The major and his wife jumped out of the cockpit, pulled the backseat forward, and out tumbled all these little kids. Five little kids they had. She was holding a baby in her arms when he landed.