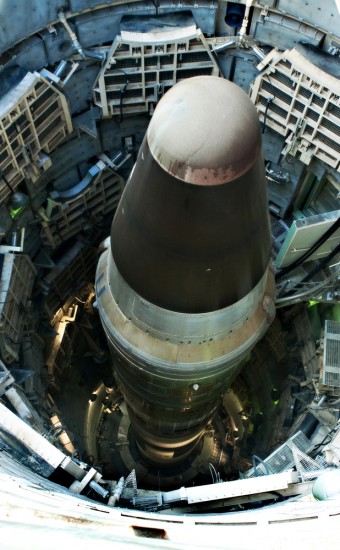 Today I found out that during the height of the Cold War, the US military put such an emphasis on a rapid response to an attack on American soil, that to minimize any foreseeable delay in launching a nuclear missile, for nearly two decades they intentionally set the launch codes at every silo in the US to 8 zeroes.

We guess the first thing we need to address is how this even came to be in the first place. Well, in 1962 JFK signed the National Security Action Memorandum 160, which was supposed to ensure that every nuclear weapon the US had be fitted with a Permissive Action Link (PAL), basically a small device that ensured that the missile could only be launched with the right code and with the right authority.

There was particularly a concern that the nuclear missiles the United States had stationed in other countries, some of which with somewhat unstable leadership, could potentially be seized by those governments and launched. With the PAL system, this became much less of a problem.

Beyond foreign seizure, there was also simply the problem that many U.S. commanders had the ability to launch nukes under their control at any time.  Just one commanding officer who wasn’t quite right in the head and World War III begins.  As U.S. General Horace M. Wade stated about General Thomas Power:

To give you an idea of how secure the PAL system was at this time, bypassing one was once described as being “about as complex as performing a tonsillectomy while entering the patient from the wrong end.”  This system was supposed to be essentially hot-wire proof, making sure only people with the correct codes could activate the nuclear weapons and launch the missiles.

However, though the devices were supposed to be fitted on every nuclear missile after JFK issued his memorandum, the military continually dragged its heels on the matter.  In fact, it was noted that a full 20 years after JFK had order PALs be fitted to every nuclear device, half of the missiles in Europe were still protected by simple mechanical locks. Most that did have the new system in place weren’t even activated until 1977.

Those in the U.S. that had been fitted with the devices, such as ones in the Minuteman Silos, were installed under the close scrutiny of Robert McNamara, JFK’s Secretary of Defence. However, The Strategic Air Command greatly resented McNamara’s presence and almost as soon as he left, the code to launch the missile’s, all 50 of them, was set to 00000000.

Oh, and in case you actually did forget the code, it was handily written down on a checklist handed out to the soldiers. As Dr. Bruce G. Blair, who was once a Minuteman launch officer, stated:

Our launch checklist in fact instructed us, the firing crew, to double-check the locking panel in our underground launch bunker to ensure that no digits other than zero had been inadvertently dialed into the panel.

This ensured that there was no need to wait for Presidential confirmation that would have just wasted valuable Russian nuking time.  To be fair, there was also the possibility that command centers or communication lines could be wiped out, so having a bunch of nuclear missiles sitting around un-launchable because nobody had the code was seen as a greater risk by the military brass than a few soldiers simply deciding to launch the missiles without proper authorization.

Dr. Blair, whose resume to date is far too long to write out here, is the one who broke this “8 zeros” news to the world in his 2004 article “Keeping Presidents in the Nuclear Dark.” He also outlined the significant disconnect between the nation’s elected leaders and the military when it came to nuclear weapons during the Cold War.

Dr. Blair had previously made waves in 1977 when he wrote another article entitled “The Terrorist Threat to World Nuclear Programs“.  He had first attempted to communicate the serious security problems at the nuclear silos to congressmen starting around 1973. When that information fell on mostly deaf ears, he decided to outline it for the public in this 1977 article where he described how just four people acting in tandem could easily activate a nuclear launch in the silos he had worked in. Further, amongst other things, the PAL system McNamara had touted was barely in operation and thus launches could be authorised by anyone without Presidential authority.  He also noted how virtually anyone who asked for permission to tour the launch facility was granted it with little to no background checks performed. It is, perhaps, not coincidence that the PAL systems were all activated and the codes changed the same year this article was published.

So to recap, for around 20 years, the Strategic Air Command went out of their way to make launching a nuclear missile as easy, and quick, as possible.  To be fair, they had their reasons, such as the fact that the soldiers in the silos in the case of a real nuclear war may have needed to be able to launch the missiles without being able to contact anyone on the outside.  That said, their actions were in direct violation of the orders of the Commander-in-Chief, the President of the United States, during a time of extreme nuclear tension. Further, not activating this safeguard and lax security ensured that with very little planning, someone with three friends who had a mind to, could have started World War III.

We don’t even think that could pass for a bad conspiracy theory film plot, but history is so often stranger than fiction!