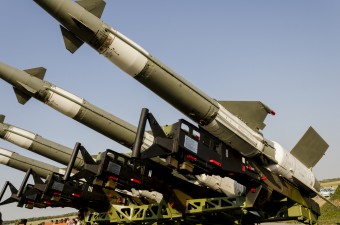 In 1962, the U.S. and the Soviet Union were on the brink of possible mutual destruction- the world as a whole was facing a possible nuclear winter and all the devastation that would come with it. The Cold War had been escalated to “tepid” and was close to becoming hot with the failure of the Bay of Pigs in 1961 and the ensuing Cuban Missile Crisis.

In May 1962, Soviet President Nikita Khrushchev and Cuban President Fidel Castro reached a “secret” agreement that allowed the Soviets to start building missile sites in Cuba, including stocking them with nuclear missiles- 42 of them.

It should be noted here that the U.S. at this time had nuclear missiles in Turkey and Italy that could hit Moscow within 16 minutes of being launched.  On the flip-side, the Soviets had plenty of nukes pointed at and perfectly capable of destroying the U.S.’ allies throughout Europe.  However, the Soviets did not have nearly the capability to destroy targets in the U.S. itself.  Certainly they had enough nukes to destroy all the major cities in the U.S. and more, but they were lacking in reliable intercontinental ballistic missiles to adequately function as a “mutual destruction” deterrent.  Indeed, there were some among the U.S. brass that felt the loss of allies throughout Europe and the lesser direct causalities from long range nukes that managed hit their targets in the U.S. were acceptable losses given the payoff would be the annihilation of the Soviet Union and the end of that threat to the United States.  So if the Soviet Union had nukes in Cuba, that tipped the balance in the Cold War back to near even, rather than in the U.S.’s favor as before.

In the fall of 1962, the United States sent a US U-2 aircraft to fly over Cuba to attempt to confirm the rumors that they had heard about the Soviet missile sites in Cuba.  On October 14th, 1962, the U-2 arrived back with pictures of these missiles sites. A day later, the pictures were presented to President Kennedy. Tensions rose and alarms were sounded. And, thus, on October 15th, 1962 the 13-day ordeal that became known as the Cuban Missile Crisis began.

Vasili Arkhipov was born on January 30th, 1926 to a poor, peasant family near Moscow in the town of Staraya Kupavna. At the age of 16, he began his education at the Pacific Higher Naval School. Vasili saw his first military action as a minesweeper in the Pacific Theater at the tail end of World War II.  In 1947, he graduated from the Caspian Higher Naval School and served on submarines in the Soviet Black Sea, Northern, and Baltic fleets. In 1961, Vasili got his first taste of crisis management in an incident that, while extremely momentous, wasn’t even close to what he’d help with later.

This first incident happened when Vasili was appointed deputy commander of the new K-19 sub (known today as “the Widowmaker” – more details below), one of the first Soviet nuclear subs, which was also equipped with a nuclear ballistic missile. On July 4th, 1961, as the sub was conducting exercises near Greenland, a major leak was discovered in the radiant cooling system.  Since no backup cooling system was installed pre-sail, the reactor on the sub was in real danger of a nuclear meltdown.  In order to prevent a nuclear accident unlike any the world had ever seen before, the captain of the sub sent workers into high-radiation areas to build a cooling system on the spot. Every member of the sub did what they could to prevent disaster. Vasili, lending his engineering expertise, helped contain the overheating reactor.  The crew succeeded, but not before these workers and many on the crew developed radiation sickness. Every worker that was sent as first responders into the high-radiation areas died within days.  Due to this, a mutiny nearly erupted on board the K-19 sub. Vasili backed his captain in continuing the work and was, eventually, awarded a medal for his bravery in a time of crisis and loyalty to the Soviet Union. All of this, though, was a precursor to the day Vasili Arkhipov saved the world.

After his time on the K-19 sub, Vasili was made second in command on the B-59, one of four attack submarines that was ordered to travel to Cuba on October 1st, 1962. The sub contained 22 torpedoes, one of which was nuclear, holding the same strength as the bomb that was dropped on Hiroshima.  The captains of each of the four subs were given permission to fire their nuclear torpedoes at their own discretion, so long as they had the backing of the political officer on board. Unknown to the crew of the B-59, the United States began their naval blockade of Cuba on October 24th and informed the Soviets that they would be dropping practice depth charges (think warning shots) to force subs to surface and be identified.

Moscow could not communicate this information to the B-59 due to it being too deep underwater to receive radio transmissions. On October 27th, 1962, US destroyers and the aircraft carrier USS Randolph located the sub, trapped it, and began dropping depth charges to force it to surface. The sub’s crew, which had been traveling for nearly 4 weeks with very little communication with Moscow, was very tired and not aware of circumstances. The sub’s captain, Valentin Savitsky, believed that nuclear war had already broken out between the Soviet Union and the US and wanted to fire the nuclear torpedo.

Fortunately, particularly given the heightened tensions at the time, in this case, one other person had veto power over firing besides the captain and the political officer, the second in command Vasili Arkhipov.  Vasili, despite being second in command on the B-59, was the leader of the fleet of the four Soviet subs sent.  Had Vasili not been present, nuclear war would have likely happened as both the captain and the political officer wanted to launch the nuclear torpedo. Vasili vehemently disagreed, arguing that since no orders had come from Moscow in a long time, such a drastic action was ill-advised and the sub should surface to contact Moscow. A heated argument broke out- legend, probably false- says punches were thrown.  Eventually, though, Vasili won the day (his reputation as a hero in the K-19 mutiny reportedly helped in the debate) and the sub surfaced. Upon meeting their American enemies, they were instructed to head back to Russia.  They obliged, (additionally, they began to have mechanical issues on board the sub) and headed east. Nuclear war was averted. Vasili Arkhipov was a hero… again.

When the sub arrived back in Russia, the crew of the B-59 were met with trepidation. After all, they had pretty much surrendered to the Americans. Said one Russian admiral to the submariners, “‘It would have been better if you’d gone down with your ship.”

Despite the not-so-hero’s welcome he originally received from the Soviets upon his return, to his wife, Olga, Vasili was always the man who saved the world,

The man who prevented a nuclear war was a Russian submariner. His name was Vasili Arkhipov. I was proud and I am proud of my husband, always.