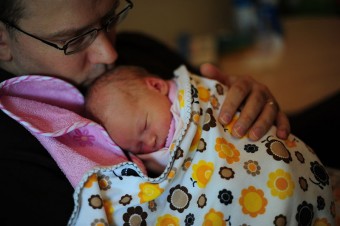 Calling our parents anything other than mom, dad or one of the many variations thereof is an almost alien concept to many (and in some cultures is considered downright rude). So why is it we refer to our parents in this way? Where did it come from and perhaps, more curiously, is there any culture that forgoes this seemingly universal nickname custom for parental figures?

The words can be traced back to the 1500s for “dad” and the 1800s for “mom”. As with so many etymologies, where these words were first uttered and by whom is a mystery. Even the Oxford English Dictionary has admitted that they have “no evidence” on where the word “dad” originated. The word “mom”, on the other hand, is a slightly different story and it’s widely believed that the word was born from the much older word “mamma” which itself can be traced back to the 1500s in English. This, in turn, can be traced back to Latin where “mamma” meant “breast” or “teat”. From this word, we also got the word “mammalia” and later “mammal” to describe animals that suckle their young.

For example, if you wanted to address your mother in Dutch you’d say “moeder”, if you were to travel to Germany on the other hand you’d call her “mutter” while over in Italy you’d refer to her as, “madre”. Now we know what you’re thinking, those are all European languages. So let’s mix things up a bit and list the words for mom or mother in some more, shall we say, “exotic” languages, from an English speaker’s point of view, and see if you start to notice a pattern:

As you can clearly see from this list, there’s a very peculiar trend with “mom” in various languages in that it’s nearly universally pronounced with an “m” sound. If you’re still not convinced or think that we’re perhaps cherry picking examples, here’s a pretty exhaustive list of ways to say “mother” in a number of languages for you to peruse at your leisure. With a few exceptions, our favorite of which is the Mapunzugun “Ñuke”, you’ll note that they pretty much all employ an “m” and often a “ma” sound.

As for the word “dad”, while there is certainly more variation in the ways to address your man-mum in foreign languages, similar trends can be observed. For example, the word “Papa” is present in several languages including Russian, Hindi, Spanish and English, while slight variations on it appear in German (Papi), Icelandic (Pabbi), Swedish (Pappa) and a number of other languages across the globe. Likewise in Turkish, Greek, Swahili, Malay and several other languages the word for dad is “Baba” or a variation of it.

The current working theory to explain this fascinating phenomenon is that the words parents use to refer to themselves are derived from the babblings of their child during its “baby-talk” phase. It has been observed that babies, regardless of where in the world they’re born, naturally learn to make the same few sounds as they begin to learn to speak. It has also been noted that during the babbling stage, babies will create what is known as “protowords” by combining nonsensical combinations of consonants and vowels.

The really interesting part about these protowords is that they’re consistent across different cultures for reasons that aren’t quite clear. The words babies make in this early babbling stage tend to use the softer contestants like B, P and M, often leading to the creation of otherwise non-words like baba, papa and mama by the child in question.

It’s further theorised that as these are often the first sounds babies are able to make consistently, parents came to use them to refer to themselves, which explains why words like “mama”, “papa,” “dada”, “tata” and “baba” are present in so many languages as a way of addressing one’s parents. It’s usually less complex to say than the parent’s real names and works as a substitute that ultimately sticks.

As to why the “ma” sound in derivations like “mamma” came to be assigned to women instead of men, it is generally thought that it derived from the sound babies make while suckling or feeding. It’s noted that the only sound a baby can really make while its mouth is full of his or her mother’s life giving bosom is a “slight nasal murmur” or a repeated “m” sound.  Further, when the baby is hungry and sees the object of its foodie desires, it is not uncommon for the baby to, as linguist Roman Jakobson put it, “reproduced [it] as an anticipatory signal”.  While no one can prove this is how “mom” and its predecessor “mamma” came about, it would at the least explain why there is an almost universal trend of the word for mother in varying languages utilising the “m”, and often “ma” sound.

There is no such precise theory for why the word “dad” was specifically chosen (presumably from “dada”), but this lack of a good reason to assign “dada” to male parents over other variations like “papa”, “tata”, “baba”, etc. is perhaps why there is such variation on this one in terms of which repeated consonant is used to go along with the a’s in a given culture.

So is there any culture in which this nicknaming practise isn’t observed? There are certainly examples of cultures that don’t adhere to the idea of a nuclear family, but as far as applying similar types of nicknames to parental figures, not really… At least as far as we could find and we’re usually very good at this sort of thing and spent more hours than we care to admit trying to find the obligatory exception.  But if you happen to be an anthropologist or just someone who knows different and you know of an exception where children don’t commonly give their parental figures (whether truly their biological parents or not) some sort of nickname, please do let us know. We came up empty on it, which makes us a little uncomfortable as there seemingly always is at least one exception somewhere for just about any issue. Is this an exception to the rule that there is always an exception? It would seem so.