October 27, 2014 Melissa
Karla U. asks: I heard your podcast on how teflon was invented. You said it’s the third most slippery substance known to man. This makes me wonder how they get teflon to stick to pans? 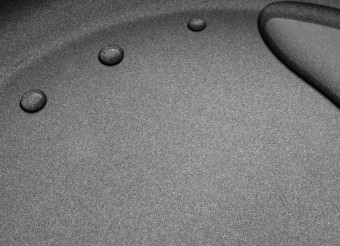 Saving us from soaking, scraping and scrubbing, Teflon has been a lifesaver (or at least a hand-saver) for home cooks for the last 50 years. Comprised of a unique polymer that actually repels nearly every other material (the only known thing a gecko’s feet can’t stick to), the processes used to get this substance to adhere so well to a pan relies on sand, heat, a vacuum and sometimes even another chemical.

For the uninitiated, as noted previously, Teflon was created by accident in 1938 in Dupont’s Jackson Lab. Dr. Roy J. Plunkett had been playing around with refrigerants and compressed and froze a sample of tetrafluoroethylene which spontaneously polymerized. The waxy result of that experiment was polytetrafluoroethylene (PTFE). Inert and, for a long time, “considered the most slippery material in existence,” PTFE became known as Teflon in 1945.

The trouble with Teflon is that PTFE is a fluorinated polymer – a long chain of identical molecules. The molecules are comprised of carbon and fluorine, enmeshed in one of the most powerful bonds known, with the carbon atoms surrounded by a “tight helix of fluorine atoms.” Along with this super-tight bond, fluorine also naturally repels other elements, and together, these two properties keep things from sticking to Teflon.

Because repulsion happens in all directions, it would be impossible to get Teflon to stick to a pan without help, and there are a few different ways this is done.

One method, said to be used for Dupont’s Silverstone brand, begins by sandblasting the pan, creating an uneven surface that encourages adherence. A primer layer of Teflon is sprayed on, then baked at high heat that helps the Teflon get “a secure mechanical grip.” Note that this is a mechanical, and not chemical, adherence that some have characterized as similar to the way ice cubes get stuck in a tray or Velcro binds together. Depending on whom you ask about Dupont’s process, the initial sticking is followed by one or two more rounds of spraying and baking before the pan is considered finished.

A second method also bakes the Teflon onto the pan (called “sintering”), but first involves subjecting it to a barrage of ions in a “high vacuum under electric field.” This forces some of the bonds holding fluorine atoms to break, allowing the carbon underneath to bond to other materials, like oxygen, which allows it to stick to the pan.

The third method is similar to the second, except that the changes to one side of the Teflon are done with a reducing agent that breaks the strong bonds between the fluorine and the carbon allowing the fluorine to bond together. This leaves the carbon free. The free carbon, which forms into unsaturated hydrocarbons, is sticky enough to get the Teflon sheet to stick to a pan.