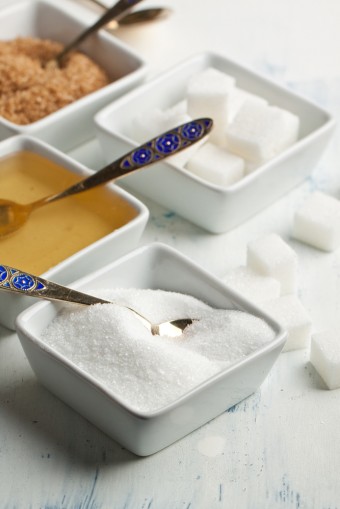 Saccharin is noted as being the first artificial sweetener, outside of the toxic Lead(II) acetate, and the first product to offer a cheap alternative to cane sugar.  Interestingly enough, like the Chocolate Chip Cookie, it was also discovered entirely by accident.

The chemical was discovered in 1878/9 in a small lab at Johns Hopkins University. The lab belonged to professor of chemistry and all around chemical boffin, Ira Remsen. Remsen was hired by the H.W. Perot Import Firm in 1877, primarily so that the firm could loan the use of his lab to a young Russian chemist and sugar-nerd, Constantin Fahlberg.

The H.W. Perot company wanted Fahlberg to test the purity of a shipment of sugar they’d had impounded by the US government using Remsen’s lab. Fahlberg agreed and happily conducted the tests. After he’d finished, Fahlberg continued to work in Remsen’s lab on various things, such as developing coal tar derivatives.

On the momentous day in question, after working in the lab, Fahlberg was at home about to tuck into his meal when he noticed that the bread roll he’d just taken a bite out of tasted incredibly sweet. After ruling out the possibility of the bread roll being made that way, Fahlberg came to the conclusion that he must have accidentally spilled a chemical onto his hands. Rather than immediately sticking his finger down his throat and throwing up, then rushing to a hospital, Fahlberg reportedly became positively excited at the thought of his new discovery. (Yes, the first non-toxic artificial sweetener was discovered because a scientist didn’t wash his hands after getting chemicals all over them- not unlike how the effects of LSD were discovered.)

At this point, Fahlberg didn’t know which of the many chemicals he’d been working with that day had caused the sweet taste he’d experienced. With no alternative in mind, he resorted to going back to his lab and tasting every chemical he’d left on his desk, FOR SCIENCE! (Note: Nobel Prize winner Barry J. Marshall once did something equally daring, FOR SCIENCE, when he chose to drink the bacteria he thought caused ulcers to prove that they did.)

In any event, Fahlberg eventually discovered the source of the sweet chemical, a beaker filled with sulfobenzoic acid, phosphorus chloride and ammonia. This deadly sounding cocktail had boiled over earlier in the day, creating benzoic sulfinide, a compound Fahlberg was familiar with, but had never had a reason to try shoving into his mouth before that day.

Fahlberg quickly penned a paper with Remsen describing the compound and the methods of creating it. Published in 1879, the paper listed both Remsen and Fahlberg as the compounds creators. However, just a few short years later, after realising the compound’s massive commercial potential, Fahlberg changed his mind and when he patented saccharin in 1886, he listed himself as the sole creative mind behind it. Fahlberg had also applied for an earlier patent on a method of creating saccharin cheaply and efficiently in 1884.

There is no agreed upon consensus on who exactly came up with what in regards to saccharin; some sources say Remsen wanted to be listed as a co-discovered purely because saccharin was discovered in his lab. This is supported by the fact that it’s noted that by the time Fahlberg came onto the scene, Remsen was the president of John Hopkins University and was, thus, absent from lab most of the time. Others claim Remsen was instrumental in the discovery, supported by the fact that earlier in his life he had published many papers on sulfobenzoic acids.  As for what Remsen had to say of the matter, “Fahlberg is a scoundrel. It nauseates me to hear my name mentioned in the same breath with him.”

Regardless, Fahlberg’s new artificial sweetener, advertised as a “non-fattening” alternative to sugar, was fairly successful right off the bat in the states, though it wouldn’t be until sugar shortages in WWI that it would became a widespread hit.

For those of you who are curious, the body doesn’t metabolise saccharin, meaning it has no caloric or nutritional value, unlike sugar. And for all you health conscious types- no, saccharin isn’t dangerous to humans.

This may come as a surprise considering that starting in the 1970s, and as recent as a a little over a decade ago, the widespread belief was that it caused cancer. This was despite the fact that in 1974 the National Academy of Sciences performed a review of all the studies done on saccharin and determined that there was no sound evidence that saccharin was a carcinogen and that the only studies that claimed to show it was were flawed or otherwise ambiguous in their results.

One particular flawed study from the 1970s was nearly the final nail in the coffin of saccharin when the researchers found that saccharin could lead to bladder cancer in rats.  This spurred the Saccharin Study and Labeling Act of 1977, which managed to thwart efforts to ban saccharin outright, instead simply getting it a severe warning label: “Use of this product may be hazardous to your health. This product contains saccharin which has been determined to cause cancer in laboratory animals.”

The rats in the study did indeed have a high rate of bladder tumors.  However, beyond any potential flaws in methodology, there is the obvious caveat that, while similar in some ways, rodents and humans aren’t exactly the same (shocker); so further studies needed to be done to see if the same thing occurred in humans.

What was happening with the rats is that specific attributes in their urine (high pH, high proteins, and high calcium phosphate) was, combined with the undigested saccharin, causing microcrystals to form in their bladders.  This led to damage of their bladder lining, which over time led to tumors forming as their bladders were continually having to be repaired.

Once the exact cause of the tumors was determined, exhaustive tests were done to see if the same thing was happening with primates. In the end, the results came up completely negative, with no such microcrystals forming.

Thanks to this, in 2000, saccharin was removed from U.S. National Toxicology Program’s list of substances that might cause cancer. The next year, both the state of California and the U.S. Food and Drug Administration removed it from their list of cancer causing substances.  In 2010, the Environmental Protection Agency concurred, stating that “saccharin is no longer considered a potential hazard to human health.”

The 1970s wasn’t the first time this compound came under fire. A much earlier and equally as unfounded panic occurred as a result of the Pure Food and Drug Act of 1906. Harvey Wiley, the director of the bureau of chemistry for the USDA, considered saccharin inferior to sugar and lobbied hard against it, even going so far as telling president Teddy Roosevelt that “Everyone who ate that sweet corn was deceived. He thought he was eating sugar, when in point of fact he was eating a coal tar product totally devoid of food value and extremely injurious to health.”

While he got the “totally devoid of food value” part correct, the latter “injurious to health” part wasn’t actually backed by any vetted evidence at the time (or since).

Roosevelt, who ate saccharin regularly, stated, “Anybody who says saccharin is injurious to health is an idiot.”

Needless to say, Wiley soon lost much of his credibility and his job.