August 8, 2013 Terynn Boulton
Mark asks: Why is it illegal to remove mattress and pillow tags? 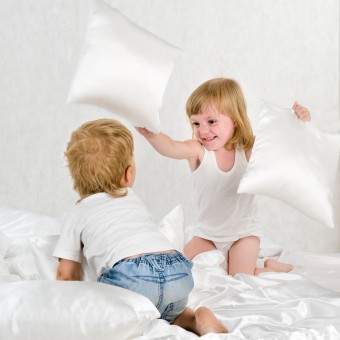 Well Mark, unbeknownst to many innocent consumers out there, the warning that it is unlawful to remove the tags from a mattress or pillow is not for you! It is for pillow and mattress sellers only. How many times does that mean you have unnecessarily awoken with the long pillow tags rhythmically flying in and out of your gaping lips, in sync with your snoring- all because you – a law abiding citizen – are afraid the pillow and mattress tag police may raid your house and find you guilty of snipping off those annoying tags?  Fear no longer!

The specific US Code we’re dealing with here is Title 15 – Commerce and Trade, Chapter 2, Subchapter V – Textile Fiber Products Identification, Section 70c – Removal of stamp, tag, label, or other identification Statute (a) Removal or mutilation after shipment in commerce.  This states:

This became the law in the early 20th century when the US government responded to concerns that some of the materials used in pillows and mattresses easily conducted illnesses or harbored pests such as lice. Some manufacturers would stuff their goods with just about anything including horse hair or corn husks, since the customer could not see them. Mattress and pillow manufacturers were required to clearly define the contents of their products and to identify whether or not these contents were new or recycled materials by placing tags on them. This was important as recycled materials could still contain lice, bedbugs or human excretion. This information allowed consumers to make informed decisions about their purchases. It also meant that based upon their contents, some mattresses and pillows would not sell. In order to ensure no pillow and mattress sellers removed these tags in order to make the sale, they were stamped, in bold letters, with a clear message – “Do not remove under penalty of law”. The words, “except by the consumer” have since been added but not a lot of consumers bother to read the tags in detail.

The myth that it is illegal has been passed down by word of mouth and through popular media. Both the movie PeeWee’s Big Adventure and an episode of Garfield and Friends feature characters who were punished for removing these labels. Before the words “except by consumer” were added to the labels, Fred, a character on a popular 1970s show called Sanford and Son, removed a warning label, tore it up and exclaimed, “power to the people!” Johnny of Johnny Bravo is chased by police in a helicopter after removing a label from a stuffed animal and then saying to himself, “Pfft, what are they going to do?” Even the mattress company Serta, who are presumably well aware that it isn’t illegal for consumers to remove the tags, created a commercial where its famous counting sheep were thrown in jail for tearing off of the label after the mattress’s owner said she didn’t need them anymore. SpongeBob SquarePants also once asked Squidward to hide him from law enforcement when he panics after removing the tag from his mattress.

Although it may not be illegal for you, the consumer, to remove the tags from your pillows or mattresses, it is a good idea if you cut them off to safely store them with your warranty information. Many mattress manufacturers, including Sealy, Serta and Simmons require the tags to be produced in a warranty claim.