Why a Gecko’s Feet can Stick to Almost Anything 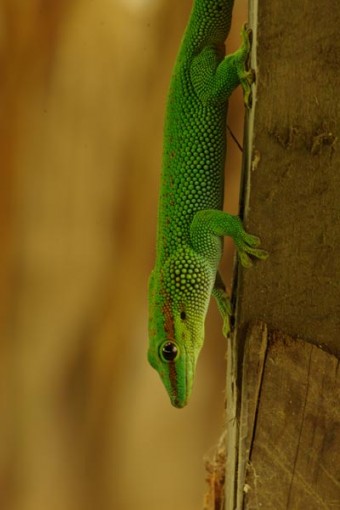 Today I found out how Gecko’s feet stick to almost anything.

It has been observed since the 4th century BC that geckos have the ability to climb walls, hang upside down, and apparently “stick” to anything. Aristotle was the first known to have commented on the phenomenon, stating gecko’s have the ability to “run up and down a tree in any way, even with the head downwards.” It wasn’t until recently that it was discovered what gave them this spider-man-like ability.

Gecko’s have millions of tiny hairs on their toes called setae (“setae” being Latin for “bristle”). All combined, these hair-like tissues give a washboard type appearance to a gecko’s toes. Each one of these seta have thousands of thinner hair-like structures that have flat caps at the ends called spatulae (yes the same meaning as the thing that flips our pancakes).  These spatulae use what is called “van der Waals” force to allow the gecko’s feet to adhere to objects.

More specifically, all of these seta and spatulae combined give the gecko’s feet an extremely large surface area, compared to its size. This surface area allows the gecko to take advantage of attraction caused by van der Waals force. Van der Waals force, simply stated, is the combined attractive forces between molecules (for more detail, see the Bonus Facts below).  Normally, the force between molecules is too minute to matter; however, given the light weight nature of a gecko (approximately 2.5 ounces) and the extreme number of spatulae (which are about the size of a bacterium), the combined force allows the gecko to “stick” to almost anything.  This surface area is so great that it has been shown that if a mature gecko were to have all of their setea in contact with a surface at one time, it could potentially support up to 290 lbs.

There may be even more going on here as well, though it’s still up for debate. A study published in the Journal of the Royal Society Interface in the summer of 2011 has shown that geckos leave footprints in the form of Phospolipid residue. Phospolipids are a type of lipid (molecule that forms fats and waxes) that can form with 2 layers. These layers allow it to both attract water on one side and repel it on the other. This study suggests that there might be more going on with a gecko’s ability than we currently realize and it is thought by its publishers that these phospholipids might also play a role in a gecko’s sticky talent.

While the discovery of phospholipids in the gecko’s footprint brings a new factor to the equation, the ancillary evidence that a gecko cannot “stick” to Teflon is a strong indication that van der Waals force is the main mediator in their abilities.  Teflon (Polytetrafluoroethylene) is mainly carbon and fluorine. Fluorine itself is highly electronegative, meaning it really really likes to attract electrons to itself. Because of this, it tends to mitigate what is known as the “London dispersion force”. This force is thought to usually be the dominate player in the van der Waals force. A gecko, who is dependent on the sum total of all of the factors of van der Waals force, would find it extremely difficult to stick to anything that eliminates its ability to utilize the force. As such, geckos cannot “stick” to Teflon.