The Day the Beatles Ran a Relay Race 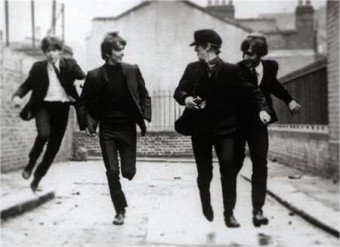 It was May 11, 1965. The Beatles were on location, wrapping up filming their second movie “Help!” The “Help!” director, Richard Lester, was to film a few atmosphere and scenery shots in London the next day, and after that, the 55th day of filming, “Help!” would officially wrap.

The Beatles’ final scenes on this historic day were filmed at Clivedon House, a 19th century stately home in Maidenhead, Berkshire. Clivedon House was doubling as Buckingham palace in these scenes.

Sometime during this day, the Beatles were officially “challenged” to a relay race by the crew of “Help!” Although world famous and universally popular as singers, musicians and composers, the Fab Four’s athletic prowess left much to be desired. It was during the “Help!” shoot that all four Beatles openly admitted to smoking and indulging in marijuana use, relatively frequently, if not daily. Besides the marijuana indulgence, the Beatles also liked their meals and enjoyed fine food. John Lennon was to call this his “Fat Elvis” period, as well as remember it as his “steak and whiskey” era.

But being adventurous lads, the boys readily accepted the challenge.

So how’d they do? John, Paul, George, Ringo, Neil and Alf were to be the victors in the once-in-a-lifetime race that, according to Paul was: “Fifteen furlongs, I’d say”. (So just under 2 miles.) Paul also said the Beatles were “very proud” of their relay race victory.

There is no record of exactly when the race took place during the day, whether before the day’s shoot was finished, during the lunch break, at the end of the day, or during a “wrap” celebration. However, the relay race was filmed. Sadly, the footage has never been released to the public.